It says a lot about the horrors of boarding school food that my co-prisoners and I were cheered up by tinned pears. We had pudding three times a week – Tuesday, Thursday and Sunday lunch – and tinned fruit was a constant. In some ways this was a good thing (our rationale being that if it had come in a tin, the cooks couldn’t have done anything to it) but when you consider that we were in a city ringed by orchards and we never got any nice fresh fruit, it was shameful.
Anyway, we liked tinned pears mostly because they were served with a vat of chocolate custard. This tasted like cheap cocoa and cornflour, but when you’d eschewed a plate of grey meat, frozen corn and mashed potato so firm you could cut it into cubes, it was nothing short of manna from heaven. 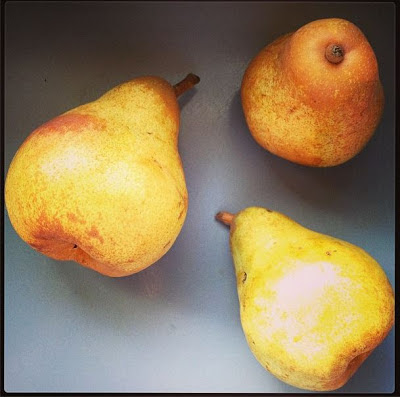 Pears in red wine
I never buy tinned pears, but I’ve been buying lots of fresh ones lately and bringing them to ripeness in the fridge. The ones that are slightly firmer get poached in a spiced red wine syrup like this one.

Heat the oven to 160C. Put everything except the pears in a large lidded, ovenproof casserole dish (like a big Le Creuset, or similar) that will be big enough to take the pears as well. Stir well to dissolve the sugar. Carefully peel the pears using a potato peeler. Leave the stems on but cut out the blossom end (at the bottom) to remove the core.
Gently put the pears in the dish – add a little water to make sure they are submerged in the liquid.
Put the lid on and put the dish in the oven. Cook for two to three hours, until the pears are tender when pierced with a sharp knife. When they’re done, you can leave them sitting in the syrup until you’re ready to eat them. I think they’re best at room temperature, with some very cold homemade creme fraiche.
Store any leftover syrup in a lidded jar in the fridge. It can be used again (or warmed up and sipped on a cold, wet night).