Have you ever heard the story of Annadamma bread? I hadn’t until recently – and like most fables, it’s a grim tale (though not one of Grimm’s tales, if you know what I mean).
The story goes that it was invented by a hard-working farmer/fisherman/hunter in New England, who had married a hopeless cook. All hapless Anna could make was cornmeal mush (in my house that’s breakfast, but perhaps tastes have changed).
Anyway, one night, when the hero (?) of the piece got home from a long day’s farmin’ and fishin’ and huntin’, he was so enraged by finding another bowl of this waiting for him that he threw in some molasses and flour, muttering ‘Anna, damn her, ‘Anna damn her’ and put the resulting mixture in the oven.
Of course, it was a resounding success, and the moral of the story is, if you want something done right, do it yourself. Or something like that. I shudder to think what became of poor Anna. 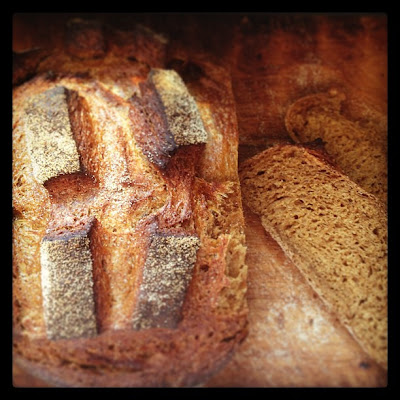 Post-modern Annadamma bread
This is a very adapted and updated version of a recipe from my prized Time-Life Breads book. which is great on inspiration and history, but some of the recipes are just a bit weird. The original features four times as much molasses, which would render it too liquorice-ish (don’t say that too quickly) for my taste and the instructions seemed very long-winded and impractical. This is a post-modern version, in which no one mutters obscenities about the cook and the bread turns out perfectly. See, dreams do come true…

Put the polenta in a small saucepan and gradually add 500ml of the water, stirring all the time. Set it over medium heat and bring to the boil, stirring often, until it is very thick (about 5-10 minutes). Remove from heat and add the molasses, golden syrup, salt and butter. Beat well and set aside to cool briefly.
Put the flour and yeast in a large bowl and stir well. When the polenta mixture is lukewarm, beat this, plus the remaining 150ml of water, into the flour until a soft, sticky dough forms. Cover the bowl with a cloth and let rest for 10 minutes, then turn the dough out onto an oiled worksurface.
Pick up one side of the dough, stretch it up, then bring it down again on top of itself. Repeat from the opposite corner. Do this from each opposing corner, then scrape the dough from your hands and walk away. Leave the dough to rest for 10 minutes, then come back and repeat the pick up and stretch process again. Then leave it again for 10 minutes. Do this process once more, then scoop the dough into a well-oiled large bowl. Cover with a cloth and leave in a warm place for about 45 minutes, until nearly doubled.
Heat the oven to 200C. Tip the dough out onto the bench and knock back gently, pressing it out into a rectangle. Gather up into a round ball, tucking the ends underneath and leave on a polenta-sprinkled, baking paper-lined tray for 25-35 minutes – if you poke it gently with your finger and the indentation stays hollow, it’s ready to go in the oven. Slash the top of the loaf – a cross-hatch pattern will get you the checkerboard crust in the photo above and sprinkle with a bit of polenta – then bake for about 40 minutes, or until the bottom sounds hollow when you tap it. Slide onto a rack to cool completely before slicing.