When it comes to seemingly effortless chic, you have to hand it to the French. It’s evident in what they wear, how they act, what they eat – whatever you think of their politics or their pop music, they’ve got it all over the rest of us. Only the French could make shredded carrots and vinaigrette seem chic, n’est-ce pas?

Last month in Paris (see how I just slipped that in there?) I fell back in love with carrottes rapees – which must be the simplest of all salads. It doesn’t sound much on paper – just shredded carrots dressed with a mustardy vinaigrette – but it’s sweet, crunchy and refreshing, just the thing for a hot summer night. It’s about 20 degrees cooler here than it was in Paris in late July, but I made a batch of this up the other day and can report that it’s equally good in the southern hemisphere. The views aren’t quite the same, but you can’t have everything. 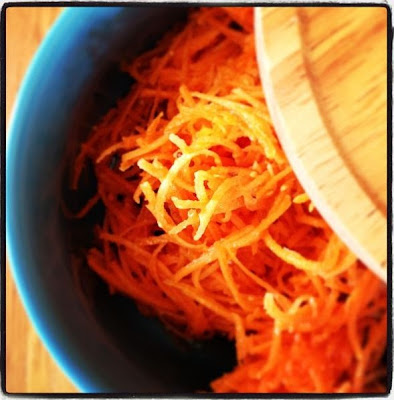 Chic carrot salad
A bowl of this manages to be quite satisfying, which is probably handy if you’re having a French Women Don’t Get Fat sort of moment. It’s a good accompaniment to fish, or rice, or rolled into sushi, or tucked into a peanut butter and alfalfa sprout sandwich. Just one thing – I think it’s best made with carrots shredded in a food processor or with a mandolin. Using a box grater doesn’t quite yield the same result – like having a Chanel couture dress made in a factory.

To make the dressing, put the garlic, salt and lemon juice in a lidded jar (I use an old Maille mustard jar for extra authenticity – and because we have dozens of them) and shake well. Add the mustard and honey and shake again. Add the oil and shake until it has emulsified. Taste – it should be slightly sharp.
Put the shredded carrots in a large bowl and pour over half the dressing. Toss gently, then drizzle over the rest if you think it needs it. The carrots should be damp, not drowned.
Serve at once or keep well covered in the fridge for a day.