Our fridge, not to mention our bellies, are still recovering from an epic feast we had last weekend – dinner for six adults and as many children involving a three-kilo piece of pork shoulder, sacks of Turkish buns, a crunchy slaw made from a Savoy cabbage and several fennel bulbs and a vat of homemade barbecue sauce. Amazingly there were still lots of delicious leftovers, which is why I haven’t posted any recipes this week. There was even a bit of the show-stopping pudding left over, which I hid at the back of the fridge as a cook’s perk.

I dreamed this dessert up to celebrate the third birthday of We Should Cocoa – which this month has the thrilling theme of ‘Showstopping Cakes’. This one was such a showstopper that I couldn’t waste any time photographing it, which explains the slightly odd shot below. 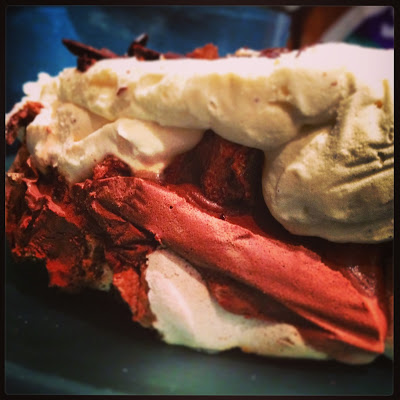 Chocolate Mousse Cake
Take a look at the ingredients for this showstopper and you’d be right in thinking that it’s more like a heartstopper – with nearly a litre of cream involved it’s not going to win any Heart Foundation prizes. But it serves at least eight, with a generous slice left over for the cook to hide in the fridge to eat later. There are three stages, but none of them are particularly onerous. You must, however, make the pavlova the day (or night) before you want to serve the cake and allow at least four hours’ resting time in the fridge once you have assembled it. Don’t be put off by the length of the recipe – it’s not at all tricky to do.

First, make the pavlova. Heat the oven to 180C and line a tray with baking paper. Put a 28cm cake tin on the baking paper and draw a circle around it – this will help be a guide for the pavlova.
Using a freestanding mixer or a very powerful electric beater, whisk the egg whites until frothy, then gradually whisk in the sugar. Beat for 15 minutes, or until the sugar has dissolved. The mixture will be very thick and glossy. Sift over the cocoa and fold in, then dollop the mixture onto the prepared cake tin. Carefully put the tray into the oven, then bake at 180C for 10 minutes. Turn the heat down to 90C and leave the pavlova in the oven for 10 hours, until very dry and hard. Turn off the heat and let the pavlova cool completely in the oven.

When you are ready to start assembling the cake, get the mousse ready. To do this, heat 200ml of the cream in a medium saucepan until boiling point. Remove from heat and tip in the chocolate. Let it sit for a minute, then stir well until the chocolate melts and the mixture is smooth and glossy. Set aside to cool briefly while you whip the other 200ml of cream until it forms soft peaks. Gently fold the chocolate mixture into the cream and set aside.

Next, line the bottom and sides of the aforementioned 28cm springform cake tin with plastic wrap. Cut out a circle of the pavlova to fit into the tin. If your pavlova is very tall, slice it horizontally through the middle so you have two discs. Line the bottom of the tin with one of the discs of pavlova (or pack the bottom of the tin with the remaining pieces). Pour over the chocolate mousse, then top with the other disc or pieces of pavlova. Loosely cover with plastic wrap and put in the fridge.

Take a breather for a moment, then whip the 500ml cream to soft peaks. Remove the tin from the fridge and dollop the cream on top of the mousse and cream layers. Scatter with the roughly chopped chocolate and nuts. You can also crumble any remaining pavlova bits on top. Cover loosely with plastic and leave in the fridge for at least four hours to allow the mousse to set and the cream to soak into the crispy meringue.

To serve, carefully unclip the tin and peel away the plastic wrap before transferring the cake to a suitably glamorous dish. Serves 8-10.