Remember what I said about not judging a cookbook by its cover? About two days later I went to the library and had my head turned by a very pretty collection of Elizabeth David recipes. Oops.

This lovely book, put together by her literary trustee and former editor Jill Norman, mixes the genius of Mrs David with some great photos. It’s not as readable in bed as the little paperbacks, but it’s very inspiring. I happened across this bread recipe, which I’d never seen before, and whipped it up the other night. 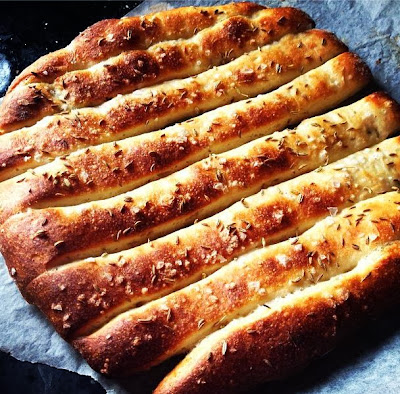 Salted and spiced bread ribbons
If you’re not schooled in the way Mrs David wrote her recipes can seem a bit inpenetrable, so I’ve rewritten it in a more modern style. This is very easy, comparatively quick to make and impresses non-breadmakers no end.

500g bread flour
2 tsp dried yeast
2 tsp salt
450ml milk, plus another tablespoon or so
3 Tbsp butter
3 Tbsp whole cumin, caraway or fennel seeds (or a mixture of all of them), plus a few extra tablespoons for sprinkling
flaky salt

Put the milk and butter in a small saucepan and heat until blood heat.
Put the flour, yeast and salt into a large bowl and mix well, then pour in the milk and butter. Mix to form a soft dough, then cover the bowl and leave in a warm place until the dough has doubled – about an hour.
Heat the oven to 200C.
Tip the dough onto a floured surface and knock down, then knead in the 3 Tbsp seeds. Divide the dough into two and put on a large piece of baking paper. Roll each portion of dough into a rough rectangle, about 2cm thick, then slice through vertically, creating long strips about 2cm wide. Transfer the strips (using the baking paper) to two baking trays. Brush with milk, then sprinkle with the reserved seeds and some flaky salt. Set aside to rise again for about 15 minutes, then bake for 20 minutes, until golden brown.
Best eaten while still warm.