Remember our neighbours with the amazing lemon tree? They have gone on holiday and their lemon tree is taunting me with its golden globes shining through the fence. It’s been so windy lately I’ve been expecting the lemons to blow over to our side of the fence, but so far it hasn’t happened. In the meantime, I’ve been accepting gifts of lemons from friends on the other side of the harbour and using them with reckless abandon.

So when Dom’s Random Recipe challenge for October asked us to use a local ingredient I figured lemons would be it. Then I stumbled – actually, properly stumbled – over local cookbook Alice In Bakingland on the dining room floor and the perfect lemony recipe leapt up at me. 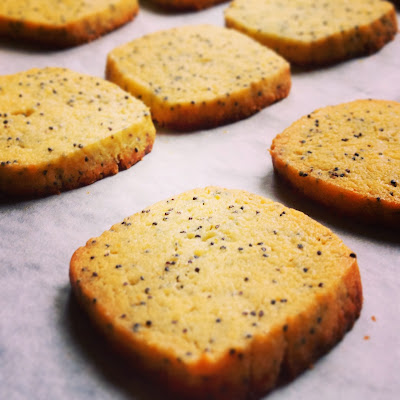 Lemon and poppy seed biscuits
Alice In Bakingland is the first book from one-time New Zealand’s Hottest Home Baker finalist and self-taught baking whiz Alice Arndell. It’s such a sweet book – I’ve described it to friends as a Pinterest cookbook because everything is so pretty (that’s also to do with the great photos by Murray Lloyd). But it’s also extremely useful, with lots of useful, everyday sorts of recipes alongside the glamour ones and a whole batch of handy hints. I’m forever indebted to Alice for sharing the information that one cup of plain flour equals one cup of high grade less two tablespoons. I’m also very grateful for her allowing me to reproduce this lovely recipe here.

Put the flour, salt, sugars, lemon zest and poppy seeds into a food processor and pulse briefly to combine. Add the butter and pulse until the mixture looks like breadcrumbs. Add the egg and egg yolk, and process until the mixture clumps.
Tip the dough out onto a large piece of plastic wrap and squeeze together. Form into a log that’s about 5cm diameter, wrap well and chill for at least two hours, until the dough is very firm.
When ready to bake, heat the oven to 180C. Line two baking trays with baking paper.
Slice the dough into 1/2 cm rounds and put on the prepared trays. Bake for 10-12 minutes, until the edges just start to brown. Cool on a wire rack. Makes about 36.