After some thought I think I’ve hit on why lifestyle cookbooks – the ones in which the authors are pictured strolling on white sand beaches in artfully creased white linen, or wearing amusingly battered straw hats while picking perfect vegetables from their charming, inner city potager – do so well. It’s because they transport us to a kind of ideal life in which there are no bills to pay, no time-consuming work to contend with and no demands on the cook except for deciding which delightful antique serving dish to use tonight.

While I cooked last night’s dinner in our somewhat messy kitchen, wearing my sweaty running kit and conducting two often conflicting conversations with two often in conflict family members, I tried to imagine what that other life would be like. Do you know, or are you more involved in the real-life after work dash? Either way, this is an easy dinner to add to your repertoire. Just don’t wipe your hands on that white linen kaftan unless the housekeeper is making another run to the dry cleaner. 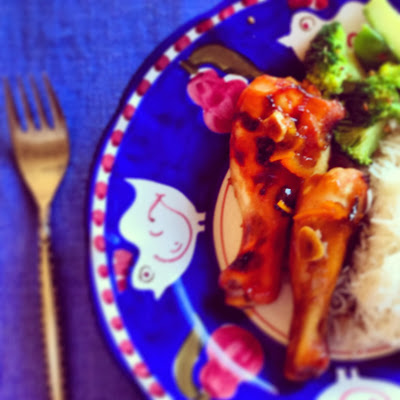 Marmalade chicken
We’ve had this salty, sweet, sticky chicken twice in the last week. The first time it was borne of emergency measures – as in, oh crumbs, what are we going to have for dinner? – the second, to make sure it was as good as I remembered. On the first go, I used organic boneless, skinless chicken thighs, which I served with a crunchy salad and flatbreads for DIY wraps (or ‘flats’ as the Small Girl calls them). Last night I used the same cooking method for organic chicken drumsticks, served with basmati rice and some blanched snow peas, broccoli and zucchini tossed in a bit of miso-d viniagrette. Either way, it’s super kid-friendly and very easy.

As soon as you get in the door, turn the oven to 200C and take the chicken out of the fridge. Then kiss your spouse/child/pet hello. Take off your coat and put down your handbag. Wash your hands.
Line a baking dish – a smallish roasting pan is good – with two layers of foil. This is important as it will save on washing up later. Don’t skimp!
Put the chicken in the roasting dish, leaving a little bit of space between each bit. Mix the marmalade, soy and oyster sauces and garlic together in a small bowl, then pour this over the chicken. Turn the chicken pieces so they are well coated in the mixture. Grate over a bit of fresh ginger, then cover the dish with foil.
When the oven is nearly at 200C, put the dish in the oven. Bake for 15 minutes (use this time to get the other meal components ready) then take the foil off, turn the chicken pieces over, and bake for another 10-15 minutes (use this time to have a shower, or a gin and tonic, or both). Check the chicken again – if it’s not cooked, turn it over and blast it for another five minutes until nice and crispy.
Serve as above, spooning the cooking juices over the meat. Be careful not to pierce the foil or all that hard work will go to waste. Serves four.

Have a good week, everyone!