I distinctly remember methodically dusting my bedroom bookshelves and my set of Little Golden Books – including inside the front covers – when I was five or six, in a bid to impress Father Christmas. I’m sad to say the habit has left me (we do have a duster, but it is most often used as a makeshift cricket bat) and Santa would be passing me by if dust-free shelves were part of the criteria.

The part of my house I am most ashamed of is my pantry. In my defence, it’s not really a pantry at all. We think it was our house’s hot water cupboard, long since repurposed. I need to stand on a chair to access the top shelf and even then I can’t reach to the back. Every now and then I would diligently go through it and tidy things up, but in the last month or so it has turned feral.

Don’t believe me? Check this out…. 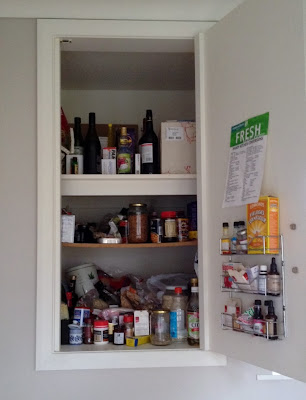 On the top shelf – at least, as far as I can reach – there are things that will really hurt if they fall down in an earthquake and hit an unsuspecting bystander on the head. I’m talking bottles of wine, about a third of a bottle of Pimms, a large bag of baking soda (for cleaning) and a box of knock-down Spiegelau wine glasses I bought at the Guild of Food Writers’ conference. Don’t ask me what’s behind them, I can’t bear to look.

The middle shelf is devoted to moderately heavy and breakable items – things like tinned tomatoes (surely one of the best inventions of the modern world), golden syrup – plus pasta, about four different sorts of rice and sundry blocks of chocolate that I have bought for some specific reason, then forgotten about.

Everything else goes on the lowest shelf. Here lie bags of dried fruit, nuts, oats and flour, a box of oils and vinegars and all sorts of spices except the one I am looking for at any one time. And more chocolate. A rack on the inside of the door currently holds all the things I use least often, such as an unopened packet of gelatine, various food colourings (for play dough experiments) and some homeopathic remedies. I should really move them, I know.

There are two reasons for me coming clean about this. One is that delightful Dom of Belleau Kitchen has asked me to reveal my pantry for his December Random Recipes challenge (it’s not called random for nothing) and two, I have just signed on the dotted line for our new pantry, which will take shape in early January.

As previously mentioned, we are having a sort of Clayton’s kitchen makeover – the new kitchen you get when you’re not getting a new kitchen. This involves new doors for the 1980s joinery, the total destruction of the current pantry and the rebuilding of a new one. I’d like to say it also included a new oven and an induction hob, but we’d like to be able to afford food in 2014, so we’re stopping there.

Anyway, my new pantry will have six (six!) shelves, with room at the bottom for a 20kg sack of flour and a box of wine. I was quite keen on getting some of those fancy pull-out shelf things, but for now we’re keeping it simple. That’s a fancy way of saying it’s much cheaper to have ordinary shelves. And after coping with two shelves that I can’t even reach the back of, six ordinary shelves sounds like pure luxury. Best of all, it’s being made by a man called Mr Darling. I am really looking forward to him coming to deliver the pantry and being able to say, ‘Oh Darling, I love it!’

Do you have a gorgeous, Pinterest-worthy pantry – or is it more like my cupboard of doom? 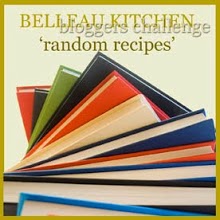