On the first day of Christmas, my true love gave to me… a set of brand new kitchen cupboards and a thumping headache.

On the second day of Christmas he came home and said, ‘have you been admiring my handiwork?’ and, ‘the fumes are not nearly so bad today’.

If we were on a DIY makeover show, this would not be big news. But in our kitchen, which until 24 hours ago was an unholy mash-up of original 1930s rimu and 1980s peach-toned MDF, this is very exciting.

Here’s how it looked (on a good day)… 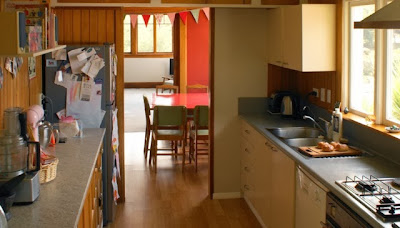 To the left, we have some quite lovely 1930s rimu cupboards, which continue overhead by the doorway to the dining room. To the right, the 1987 handiwork of a Lower Hutt joiner. You can’t tell from this softly-lit photo, but this was all swollen and scuffed and generally quite vile. Also missing from this shot are some other additions to the kitchen assets made in this period, namely a useless down-draft extraction fan (which takes up vital under-counter cupboard space) and a defunct benchtop grill (which is now my dedicated cooling rack. Just peeking into shot on the upper right-hand corner is the current overhead extraction fan, which our house’s previous owners thoughtfully ducted into the ceiling. That means that if we use it, our bedroom smells like onions, or fish, or whatever other scents you don’t find in the Diptique candles range.

Here’s a more warts and all shot of those cupboards. It’s a bit blurry because they were so ugly you actually started to shake if you looked at them for too long… 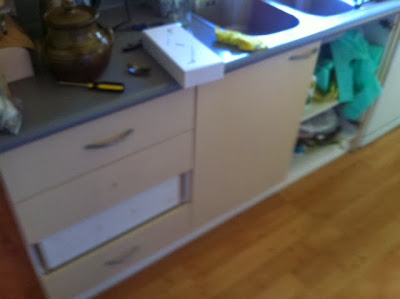 We got several people in to quote for new ones, because standard cupboard sizes seem to have changed over the years (a bit like standard cupboard sizes) and we couldn’t just buy off the shelf. When the quotes came back we nearly passed out from the shock. They were so expensive I thought they must have included Limoges china and tins of Beluga caviar. We’d originally thought we might be able to get rimu (a native New Zealand timber) to match the other side, but it would have been cheaper to paper the fronts with $100 bills. If we were doing up the whole kitchen, maybe this would seem worth it. But given that we’re looking for a bit of kitchen Botox, not a complete facelift, it was just too much.

Faced with either a) financial ruin or b) living with peach MDF for the next five years, we asked our neighbours (who have a beautifully renovated house and must rue living next door to us) over for a drink. A bottle of rose later, we had the solution: high-grade plywood, cut to fit and painted up. A few days later, in which my beloved devoted himself to studying the pros and cons of plywood vs MDF, then finding a man to cut it, we had a breakthrough.

I’ll spare you the details of what happened next, suffice to say it involved a lot of painting and sealing (and more than a few heated conversations about the right sort of handles), we had new cupboards. Total cost: about $300 – about 10 per cent of getting them made professionally.

Here’s another bad photo, this time slightly shaky because the paint fumes were getting to me… 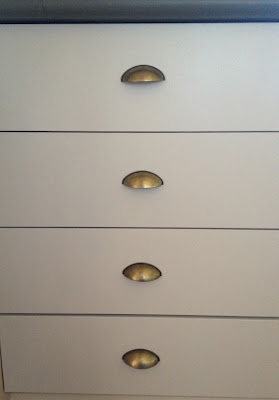 Now, I know this doesn’t look like much, but it represents the beginning of a new era for my 83-year-old kitchen. Later this week I’m talking to a man called Mr Darling (really!) about a new pantry, then early in the new year a bit of a wall is getting knocked out, the whole room is getting a fresh paint job and – most importantly – the builder is going to re-route the extraction fan so it ducts outside. If I’m a very good girl we might even get an electrician to take out the old fan thing and I’ll get a proper pot cupboard in return. I can hardly wait.

Does your kitchen need a makeover? What would you replace first?