This week, in between re-telling the story of the nativity (“but Mum, why was the baby Jesus a boy? Can he be a girl!”), I have been reading The Man Whose Mother Was A Pirate. In case you’re not familiar with this Margaret Mahy classic, it tells the story of a buttoned-down chap who is enticed away from his dull, everyday life by his sea-faring mother. It’s such a good read. Put it on your Christmas present list. I wouldn’t say the same for another book that was on high rotate here a couple of weeks ago – a flimsy yarn that saw the hapless Captain Pugwash in a standoff with a bunch of pirates over some chocolate smuggling. If your child makes a beeline for this at an op shop, point them in another direction.

Anyway, thinking about pirates and mulling over the December We Should Cocoa challenge, in which Choclette has sensibly chosen alcohol as the key ingredient, led to this ice cream. It’s not so alcohol-soaked that one scoop will send you off into paroxysms of piratical rumbustification, but I’d advise against giving it to children (even if their mothers are pirates). 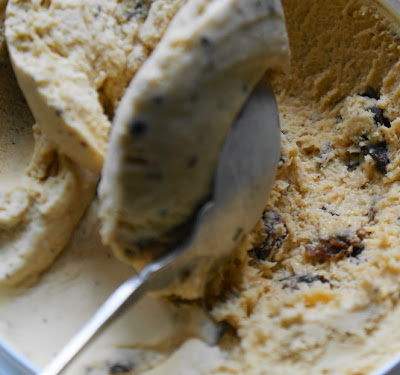 Rum and raisin ice cream
No need for a fancy machine to make this ice cream – why, you could even make it in the galley of a galleon (as long as it had a freezer). If you’re not a fan of traditional Christmas puddings, this is a great do-ahead dessert. Freeze it in a large lined loaf tin (or even a cake tin), then serve slices with little tots of rum and chocolate sauce. If you are a fan of proper Christmas pudding – or even Christmas mince pies – then a dollop of this on top is a delectable alternative to brandy butter.

At least two hours before you’re ready to make the ice cream (and therefore at least eight hours before you want to eat it), put the raisins and rum in a small bowl. Cover and set aside.
When you’re ready to make it, beat the egg yolks, egg and sugar until pale and thick. Use electric beaters unless you have the arms of a sailor.
Drain the rum into the egg mixture (reserving the raisins), then add the golden syrup and beat again. Pour in the cream and beat until soft peaks form. Scatter over the raisins and chocolate and fold in. Pour into a plastic container and freeze for about six hours before eating. Makes about 1.3 litres.

Have a wonderful weekend, me hearties x