About 20 years ago, when I had just moved into my first flat, my flatmate Geoff specialised in what he called ‘egg windows’ – a fried slice of bread with an egg in the middle of it.

Geoff’s dad, an army major, had showed him how to make them when he was a kid and Geoff was a total pro. Then an architecture student, he cut the ‘window’ out of the bread with exacting precision, and he had the timing down pat. Alas, that was probably the apex of his cooking skills. His other memorable culinary moment was the time he came home drunk, put a tray of oven chips on to cook and fell asleep on the sofa. We were saved by the neighbours calling the fire brigade, but the chips were not so lucky.

I’d forgotten all about Geoff, egg windows and the fire until I saw Maya Adam show how to make what she called ‘Egg in a hole’ as part of the Child Nutrition MOOC run by Stanford University. Here was the egg window, transformed into a fast, nutritious breakfast for a child. It was genius. But even more genius is my fried egg crumpet – a fast, nutritious(ish) and utterly delicious anytime meal for everyone. Here’s how to do it. 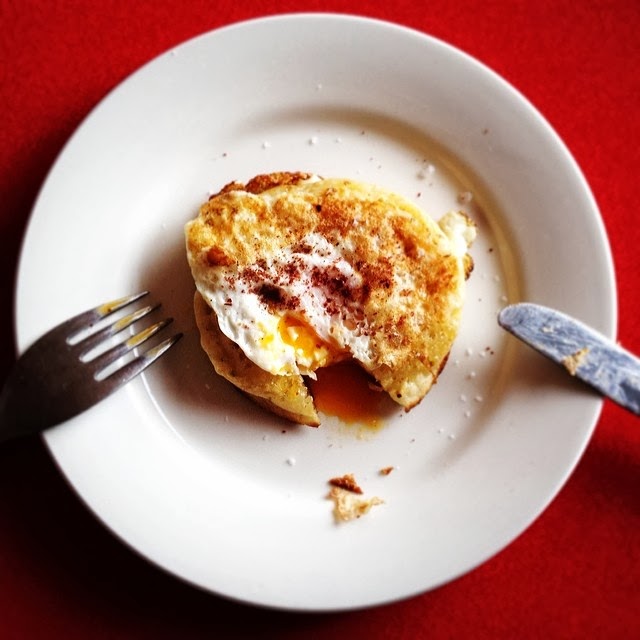 Fried egg crumpets
One of these might do for breakfast, but I think you need two for lunch. The holey nature of the crumpet means it soaks up a) butter and b) egg, so there are lots of textural contrasts – soft, silky egg and crunchy crumpet edges. Add something green on the side and you might even be able to call it dinner.

You need:
An equal number of crumpets and eggs – let’s say two per person
A good knob of butter and a splash of olive oil to stop the butter from burning
A heavy frying pan with a lid
A round cookie cutter or small glass (about five cm in diameter)
Salt and pepper
Sriracha sauce or some other spicy condiment
Grated Parmesan, optional

Cut the middle out of the crumpets with the cookie cutter or glass. You can eat the middle bit as a cook’s perk now, or toast it to eat later, or (sacrilege!) throw it away.
Melt the butter and oil in the heavy frying pan over medium-high heat. Put the crumpets in, holey side down, and cook for a couple of minutes, until golden. Flip over and let the smooth side cook for a minute.
Carefully crack an egg into the hole of each crumpet. Don’t worry if some spills over the sides, this is no big deal. Put a lid on the pan and cook, covered, for about three minutes, until the egg white is set and the outer edges are getting nice and crunchy. Carefully flip over to cook the other side until it is just set to ensure a runny yolk (obviously cook it for longer if you prefer egg yolks to be firm).
Transfer to a plate and sprinkle with salt, pepper and grated cheese, if using. Dollop on the spicy sauce and enjoy!