Many moons ago I went to a cooking demonstration by Ray McVinnie in which he was asked if one could substitute low-fat coconut milk in a recipe he was making. He looked up over the wok, raised an eyebrow and said, ‘but why would anyone want to do that?’ When the questioner murmured that ‘some people’ liked to watch their weight, Ray looked her in the eye and said, ‘just eat less’. It was a slightly uncomfortable moment. 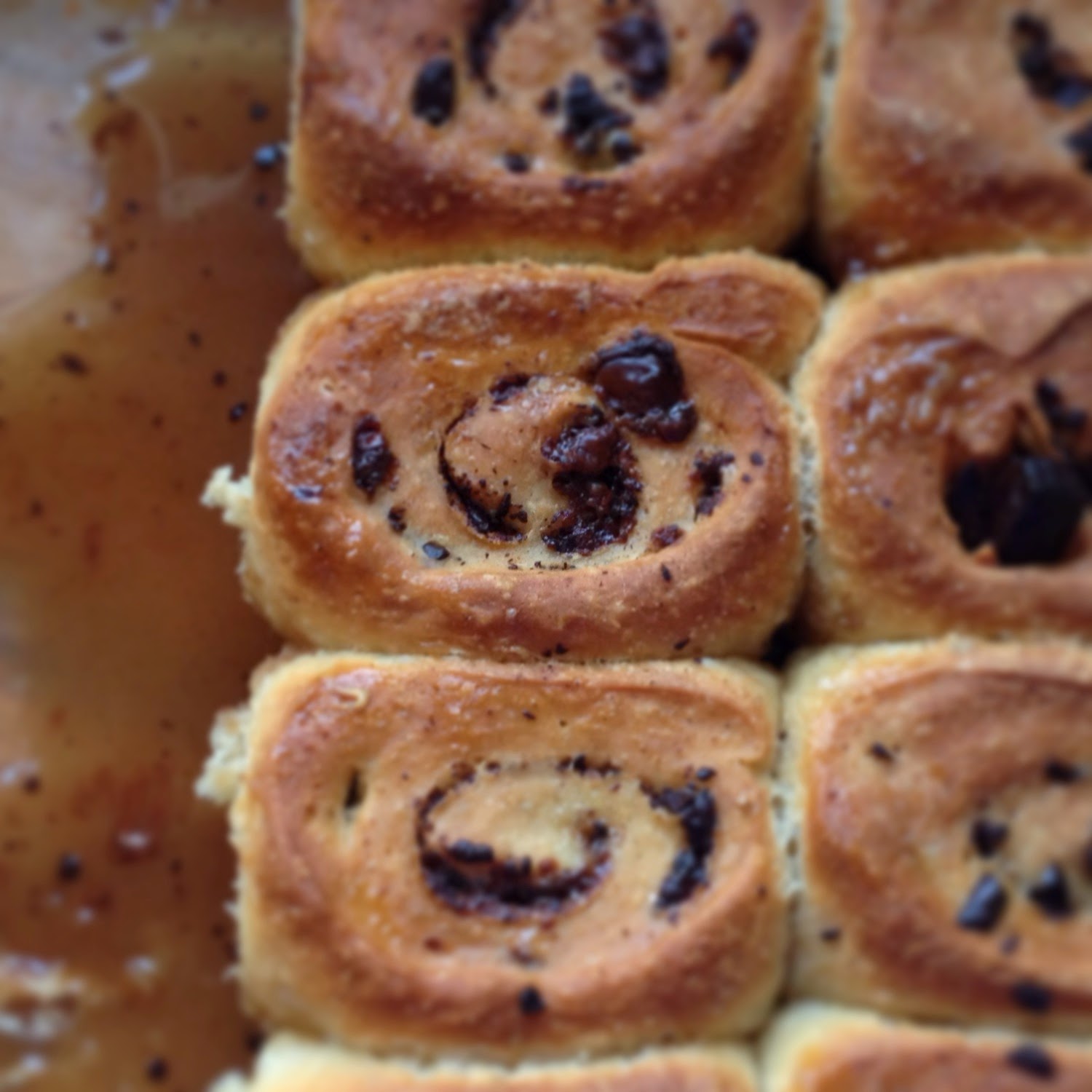 Anyway, I thought of that this morning while I was checking my email and eating some extremely high-fat, high-sugar chocolate pani popo. After signing up to Gwyneth Paltrow’s Goop emails (it was for work, honest!) I often find myself accidentally reading her helpful tips on how to become an altogether better, thinner, more detoxed, less stressed, version of myself. These usually involve signing up to some costly therapy, buying lots of expensive trinkets or working out like a maniac as suggested by her guru Tracy Anderson.

Today, as sticky-sweet coconut caramel dripped off the fluffy chocolate-studded bun, I’d never felt less in need of Gwyneth’s advice. She might think it’s time for a spring break detox a la Tracy, I say it’s time for more pani popo. Who’s with me? 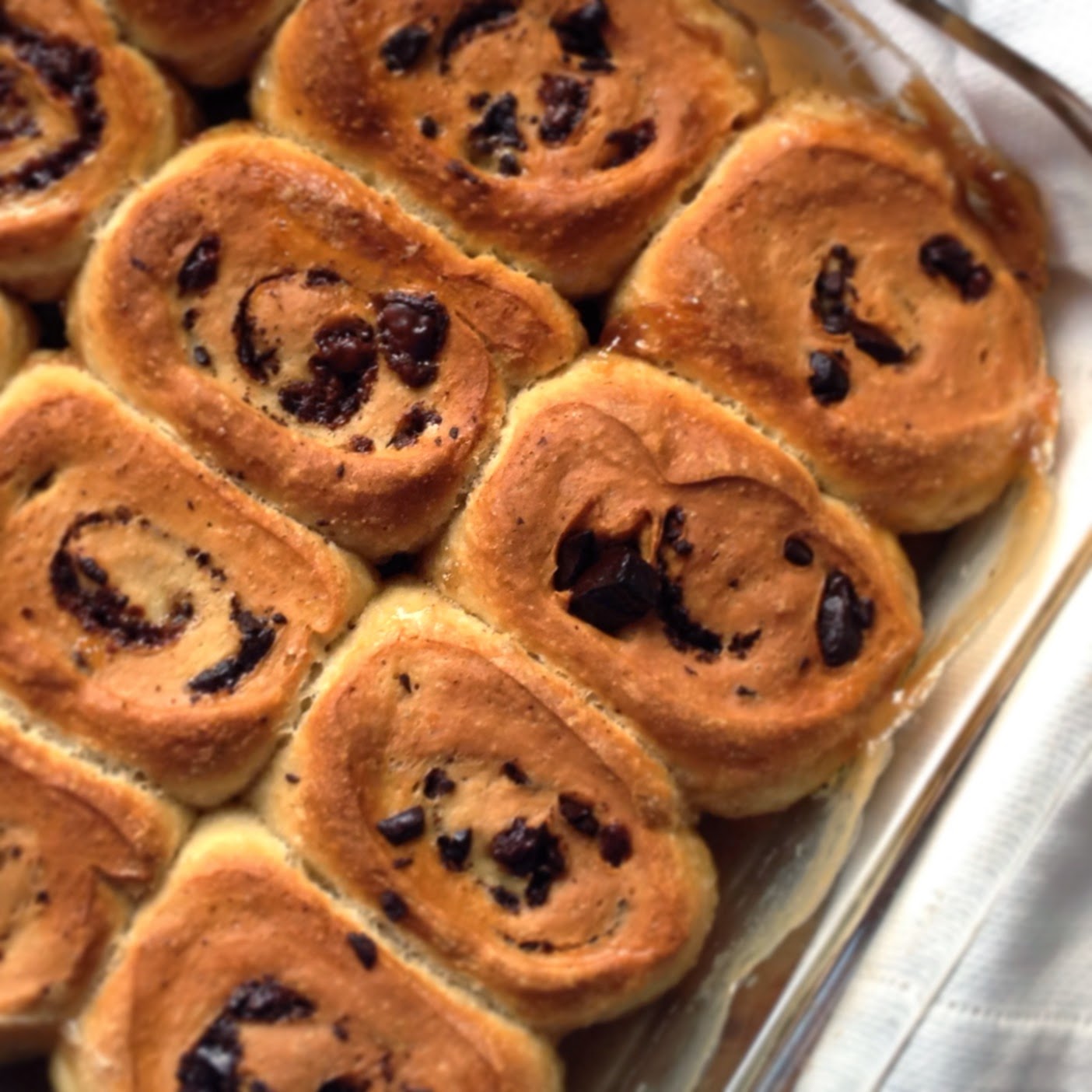 Chocolate Pani Popo
I created these buns – my own version of a Samoan classic – for the March edition of We Should Cocoa, the chocolate blogging challenge dreamed up by Choclette of Chocolate Log Blog. This month, guest host Laura of I’d Much Rather Bake Than… has chosen coconut as the special ingredient. It’s also a fitting entry for the March edition of Sweet New Zealand (hosted this month by Frances of Bake Club).
Don’t be put off by the lengthy instructions, these are easy to make.

Put the 350ml measure of coconut milk in a small pot and bring to the boil, then let cool to blood heat while you get everything else organised.
Put the flour into a large bowl and grate in the butter. Stir through briskly until the butter is mixed through (this is easier than rubbing it in).
Add the yeast, sugar and salt and mix well, then pour in the warm coconut milk and stir until it forms a soft dough. Cover the bowl and let rest for 10 minutes.
Rub a little oil on the bench and tip the dough out on to it. Fold the dough in on itself, one corner at a time until you have worked around the whole piece. Cover with the upturned bowl and let sit for 10 minutes. Repeat this twice more, then return the dough to the bowl, cover it with a teatowel and let it rise until doubled (about an hour).
When the dough is risen and puffy, tip the dough out onto the bench and knock back, then roll out into a rectangle about 1cm thick.
Scatter the chopped chocolate over it, then roll up like a swiss roll. Cut into 1.5cm slices and put these into a deep baking dish (about 30 x 30 cm, or thereabouts). Cover with plastic and leave overnight in the fridge.
In the morning, take the buns out of the fridge and let them rise for about an hour, until starting to look puffy. Heat the oven to 180C.
While you’re waiting, put the 300ml coconut milk in a small saucepan and add the sugar. Heat, stirring, until it just begins to bubble. Pour this mixture over the buns and put the dish into the oven.
Bake for 30 minutes, until the buns are a deep golden colour, surrounded by a sticky caramel.
Let them sit for 10-15 minutes before eating to make sure they have soaked up lots of the lovely syrup.
Makes at least 16 decent-sized buns.
These are best eaten the day they are made, though you can put any leftovers in the fridge and reheat them the next day. But in my experience, leftovers are not an issue. 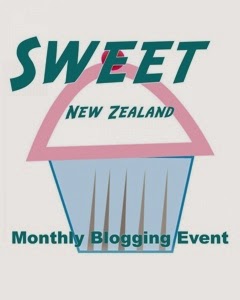