Once upon a time I used to scour charity shops and school fairs for cookbook gems, hoping to find a first edition Mrs Beeton tucked among the multiple copies of Alison Holst’s Microwave Menus. While that never happened, I did come across plenty of great finds – The Silver Palate cookbooks, pristine paperback Elizabeth Davids, a Jill Dupleix that I’d always wanted and once – a brand new copy of How To Eat for 50p – among others. 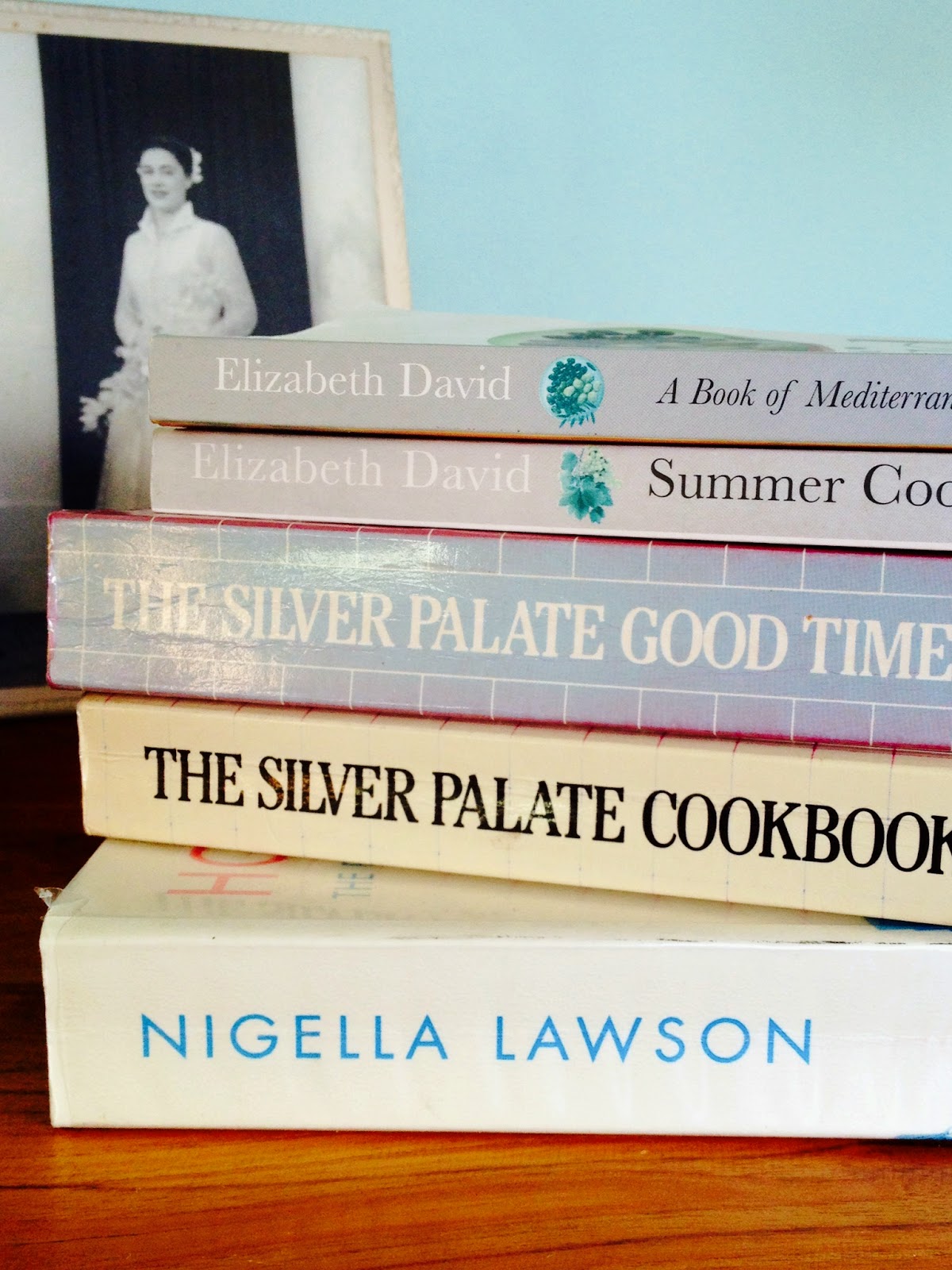 But a year or so ago I realised I was in danger of being swamped by these dusty finds; that I didn’t really need to pick up every half-decent cookbook I found and that it would be perfectly safe for someone else to buy. Then I met a woman who told me that one of the largest charity shops in Wellington gets so many books donated to it that twice a year they load up a container and take it to the tip. No, not the recycling depot, the tip. The charity can’t afford to send them overseas, so they dump them. Now – there are all sorts of issues here, not least being – why don’t they give them away – but it made me reconsider what I do with my own collection. I’ve recently decided that there are lots of books that, while I don’t use them anymore, deserve better homes than being stuck in a damp charity shop while waiting to be bulldozed into landfill. I’ve selected both the books and their recipients carefully and it was such fun watching their reactions that I’m planning to do it again in a few months’ time.

The thing is though, that all this largesse has meant that I had very few books to choose from for this month’s Random Recipe challenge. The instructions from Dom at Belleau Kitchen were to select a book from the throw-out pile you’re supposed to compile when spring/autumn cleaning – and in truth, I had only one. But the results were so convincing that I’m going to have to keep it! 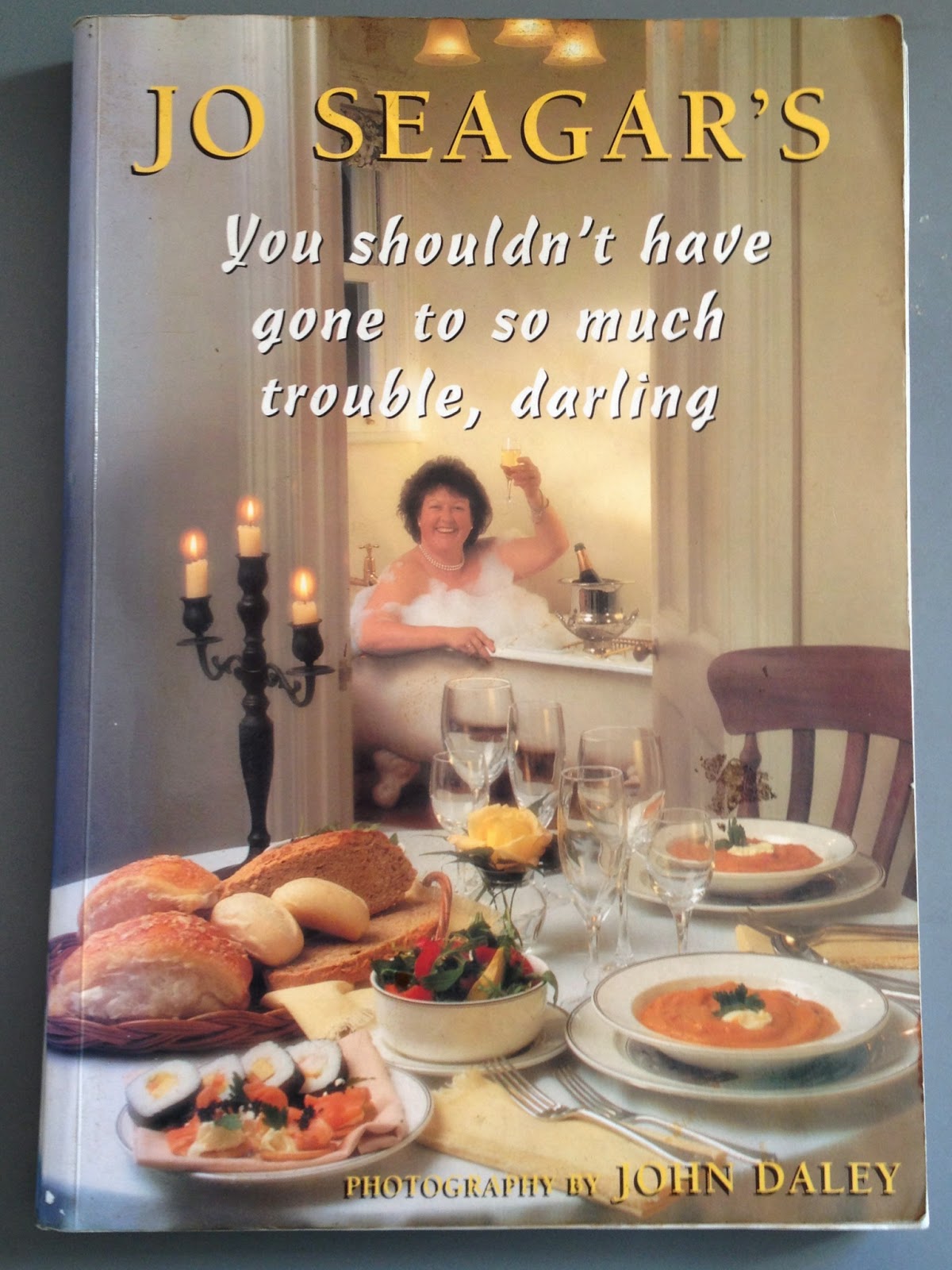 A few years ago you couldn’t move for being offered something made out of Jo Seagar’s ‘You Shouldn’t Have Gone To So Much Trouble, Darling’. This book, which features the author up to her pearl-strewn neck in a bubble bath, was first published in 1997, then a reprinted and updated version came out 10 years later. I have the original version, which I picked up from a charity shop for $2. I bought it out of nostalgia, more than anything. It was badly waterstained and I didn’t expect to ever use it, but the thing that swung it for me was the inscription on the front to the previous owner, ‘Anna’ – ‘ with much love from Momma and Poppa’. Gulp. 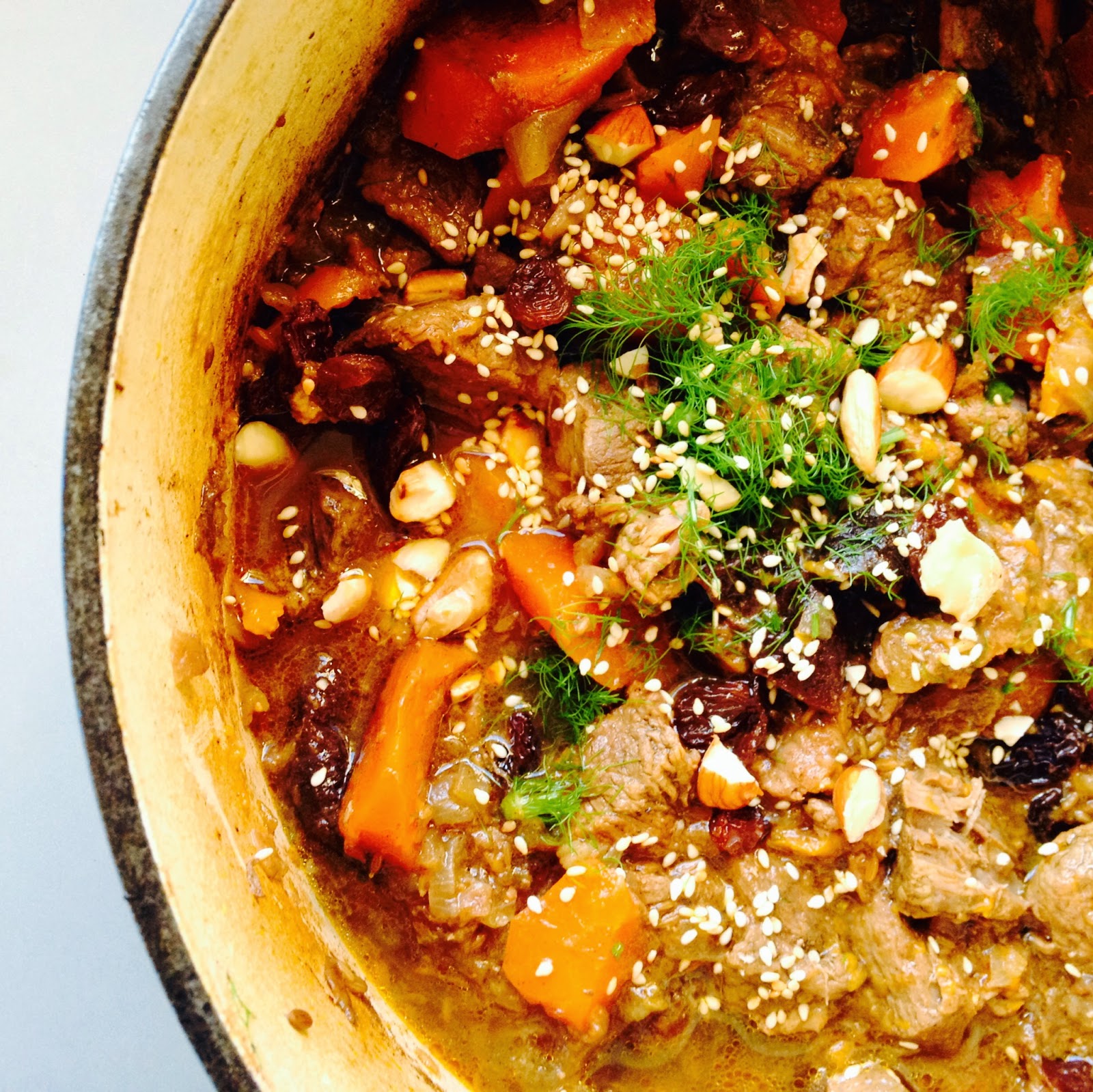 Lamb and Orange Tagine
Anna obviously used it her copy of ‘You Shouldn’t Have…’ a lot – the book fell open at the recipe for lamb tagine, which has ‘Excellent!’ scrawled across the top in blue biro. It turns out Anna was right – though I played around a bit with Jo’s original recipe to make it even more ‘excellent’ – or at least, a little lighter and not as sweet. I’ve annotated the book accordingly, all ready for its next owner.

Heat the oven to 160C.
Put the olive oil in a large, cast iron casserole and set over medium heat. Tip in the lamb, onion, garlic and ginger and cook for five minutes, stirring frequently, then add the carrots and spices. Cook for another minute, then add the mandarins or oranges and the vegetable stock. Stir well, then cover tightly and bake for 1 1/2 hours, until the lamb is very tender. Check it a couple of times to make sure it isn’t drying out – add a little water if it seems dry.
Add the prunes and stir well. At this point you can let the tagine cool completely, then refrigerate and reheat the next day. If you’re planning to eat it now, return it to the oven after adding the prunes and let cook for another 15-20 minutes. Sprinkle with the toasted almonds and coriander just before serving with rice, couscous or flatbreads. Serves four.

Are you a charity shop cookbook buyer?