Every day of their married lives (or often enough for it to seem like it was every day) my father took my mother a cup of tea in bed in the morning. Such a small, simple thing and yet such a grand, declarative act. So much more than just a cup of tea. 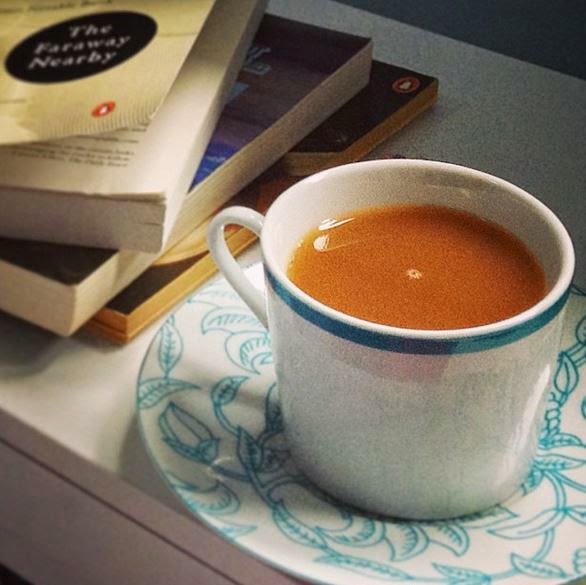 The situation was never reversed, at least not as far as I know. Mum getting up to take Dad a cup of tea was as unthinkable as her smoking a cigar or mowing the lawns. Sometimes, in the weekends, I was allowed to get into bed with Mum and receive a cup of tea too. I still have the miniature Crown Lynn cup and saucer. The cup is teal blue, the saucer is cream with a teal pattern radiating out from the centre. The tea was proper tea, looseleaf, made in a teapot. Occasionally there would be a thin slice of white bread and butter to go with it. Such luxury. When my parents travelled they took a portable tea-making kit with them, a sort of element prong that could be plugged into a hotel bathroom shaver’s plug. Thus fortified (and miraculously, never electrocuted), they would set out.

From what my mother said, this was learned behaviour. My father’s father had always started the day by taking his wife a cup of tea – so strange to think of that fearsome woman sleepily easing herself upright among soft pillows, stretching her hand out to receive a china cup and saucer – and so Dad assumed that this was what happened in all households. On reflection, I thought it did too. Sometimes, even now, when I’m half-asleep in the morning I hear the faint, far-off rumble of a boiling kettle, the tink-tink clink of cup on saucer. These sounds, even imagined, are the comforting noises of my childhood. They are a sign that the day is beginning and that all is right with the world.

Some years later, I realise the importance of the act of making that cup of tea. Despite what Hallmark cards may tell us, roses and boxes of chocolates are not the glue that bonds us together. It is the small acts of love – the early morning cup of tea, the remembering to buy a certain sort of biscuit or putting an emergency beer in the freezer – that keep us together. Flowers and chocolates and grand gestures may be expected on Valentine’s Day, but there are 364 other days in the year in which boiling the kettle is just as lovable.