This is the wedding cake that nearly wasn’t. 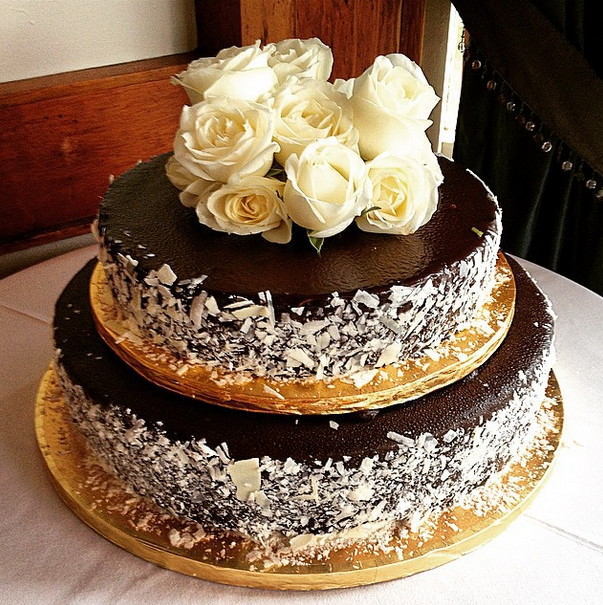 When one of my oldest and dearest friends announced she was getting married, I immediately offered to make the wedding cake. She accepted the offer and that was that.

When their wedding was delayed to May, I breathed a sigh of relief and put the cake on the back burner.

Then all of a sudden it was April, the bride was talking multiple layers, chocolate ganache, and the merits of chocolate mud versus chocolate and fig, I had a million other things on my mind and I was lying awake at night, panicking about The Cake.

It was then I remembered that I’d been in this situation before. Five years ago, with a small baby and ideas above my station, I offered to make the wedding cake for some dear friends who’d blown into New Zealand from London to get married.

“Oh yes please,” they said. “Don’t go to any trouble, but we’d like it to have three layers and have licorice allsorts exploding out the top.”

Making the cakes – one chocolate and fig, one chocolate mud and one banana (the groom’s favourite flavour) – was easy. Doing the decorating was not. Not for the first time, I recalled a school report in which my teacher said I was often frustrated when my grand plans for artworks didn’t come to fruition. I handed the baby to my mother-in-law and spent 24 hours wrestling with kilos of white fondant icing, alternating between wanting to cry and wanting to cheer.

On the afternoon of the wedding, my beloved and I balanced the cake on our knees while my father-in-law drove as slowly as he could around corners. We screamed every time the cake lurched towards my silk dress, more for the sake of the cake than my outfit. By the time we got to the venue the cake had several dents in it and I needed a strong drink to settle my nerves.

It nearly killed me, but the lovely bride and groom were happy and lots of guests said nice things about the cake. Still, I swore that it was the last time I would ever do it.

With those memories flooding back, I rang the bride. “I can’t do it,” I told her. “I’m too afraid it will be a disaster and you’ll be even more disappointed in me than you feel right now.”

Like the good friend she is, she took this news on the chin. Instead of making the cake, I decided to redefine my role as chief cake wrangler. I set about getting cake quotes and set up a wedding cake Pinterest board to gather ideas. When they baulked at the quotes – a two or three tier wedding cake is in the region of $400-$500 – I came up with plan B.

Instead of requesting a wedding cake, I asked Pandoro Bakery to make us two large cakes – one a 14″ Black Doris Plum Chocolate, the other a 10″ Mediterranean Orange, which they present on gold foil cake boards. I got them to ice them identically with chocolate ganache, with the sides rolled in white chocolate shavings.

The day before the wedding, my fellow bridesmaid and I picked them up and took them on a two-hour car ride (mercifully, on very straight roads).

Later that night, the groom helped me engineer the two together, inserting dowel rods to keep the top layer from collapsing into the bottom. With no storage option, we carefully manoeuvred the cake into a beer fridge and prayed it would survive the night.

The next morning, I returned to the venue, rescued the cake from the fridge and plopped some white roses on top. Just like that, the job was done.

The cake looked beautiful, my 22-year friendship with the bride is still intact and my mental health is sound. I may never make a special occasion cake again.

Are you prone to making special occasion cake promises? Do you have any secret tips?