Remember whoopie pies? They were going to be the new cupcakes, or the new macarons, but I don’t think they ever really took off. A shame, really; it’s always sad when little cakes never grow up to reach their full potential. Perhaps they’ll make a comeback (if slip dresses over white t-shirts, like we wore in the late 90s, can make a resurgence this summer, then surely there’s hope for the whoopie pie). I’m hoping I can get ahead of the pack on this one and I might have made the thing to do it. 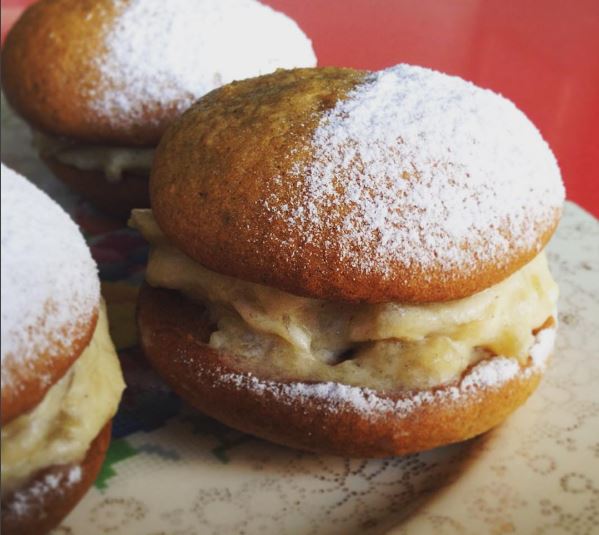 This is a recipe with three stages, but it’s not hard. Just make the apple compote the day before, so it has time to chill in the fridge. The pies can be filled in advance and stored in an airtight container.

To make the apple compote, put all the ingredients in a small pot and set over medium heat. Cover and bring to a simmer. Cook for 10 minutes, until the apple is soft. Whip to a puree with a fork, then transfer to a bowl. Cover when cold and store in the fridge.

To make the pies, heat the oven to 160C and line two baking trays with baking paper.
Put the egg in a large bowl and beat until thick. Continue beating and gradually add the sugar. Beat until pale and thick, then add the butter, sour cream, milk and vanilla. Beat to combine, then sift in the dry ingredients. Fold together until combined. Spoon into a piping bag with a wide nozzle and pipe small rounds of the mixture (about the size of a tablespoon) on the prepared trays, leaving room for spreading. You can also spoon the mixture on to the trays, but piping gives a nicer finish.
Bake for 10-12 minutes, until the pies are risen and golden brown. Remove to a rack to cool.

To make the filling, beat the cream cheese, butter, icing sugar and vanilla together until smooth. Fold in the apple compote and transfer the mixture to a piping bag fitted with a large nozzle (or use a plastic bag and snip off the end). Pipe a generous tablespoon or so of mixture onto the flat side of a pie half and top with another. Dust with icing sugar and serve – or store in an airtight container. Makes about 32 little pies.