I read something last week about how ‘invisible prisons’ – jobs, societal pressures, parenting, caring for older relatives – meant that modern women are shackled with more responsibilities than their mothers and grandmothers. I don’t know if that’s true. Personally, if that’s the price I have to pay for being able to vote, drive, own property and be generally free to do what I like, I’m fine with it. But last week I did find myself wishing I did a bit less. There’s nothing like racing home after work on the night of the school production and remembering en route that you were supposed to bake something for the cake stall to give you conniptions, is there?

Now, I know I could have ignored the cake stall request, or I could have been more organised and done it a few days in advance. But I didn’t do either of those things. Instead, I whipped up this slab of deliciousness in 20 minutes, while concurrently making boiled eggs for dinner and getting the child in and out of the bath. We then made it to the show on time, and all the lovely mothers (it’s always mothers, isn’t it?) who are so good they even RUN THE CAKESTALL cooed over the slice and wanted the recipe. In that moment, I felt a little bit less like a failure and more like a contributing member of society, even if my child was appearing in the show with a whopper of a black eye. But that’s another story. 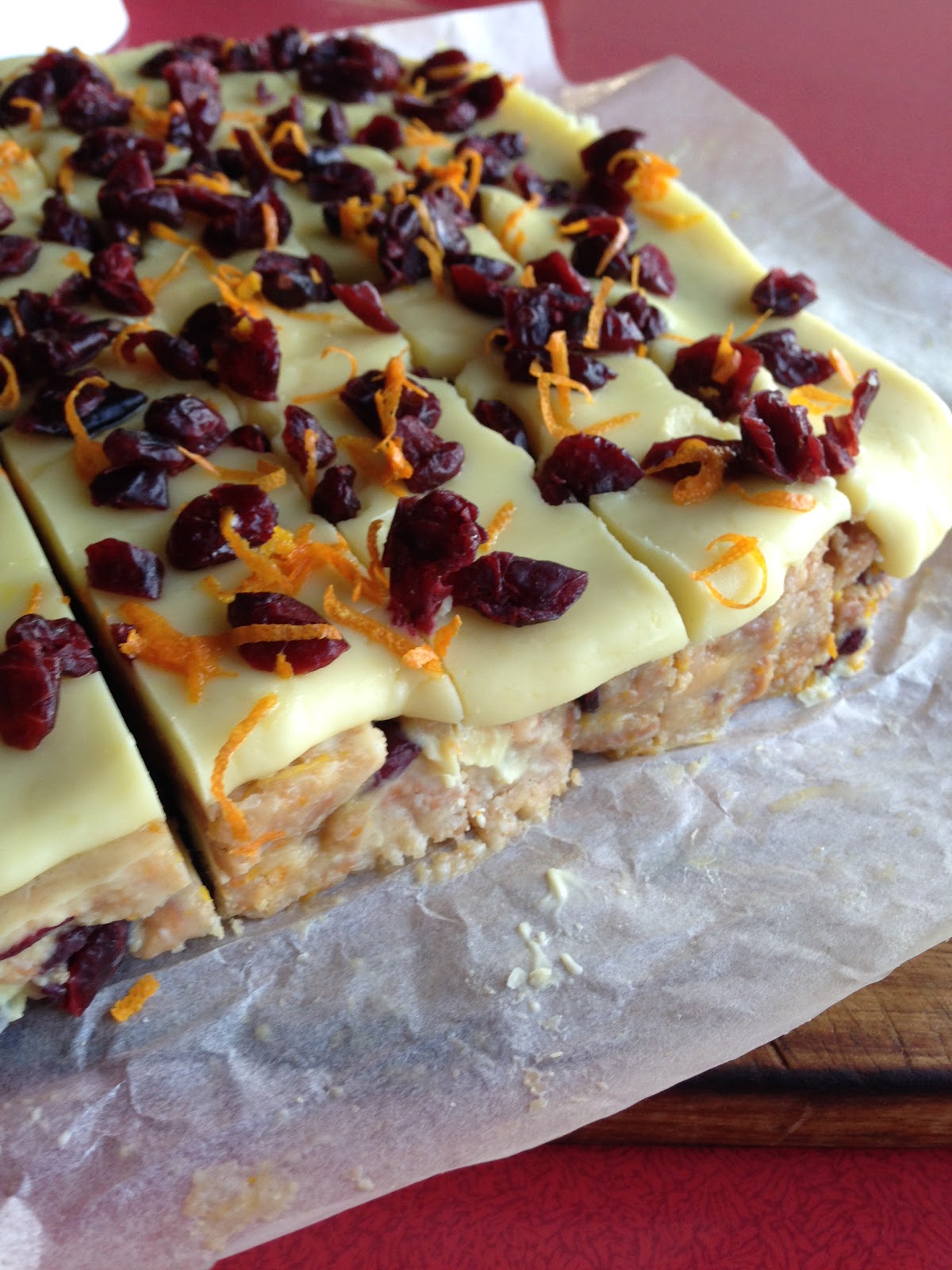 Chunky white choc, orange and cranberry slice
There are a zillion versions of this slice and the world probably doesn’t need another one, but if you have weeks where the wheels are coming off and yet you still need to ‘bake’, this will save your bacon. Or bakin’. Or something.
Anyway, this version is better than all the others because it’s big and chunky, and therefore more satisfying to eat. It’s also slightly less sweet than some versions. If you’re very, very short of time, you may like to know that it’s possible to pre-crush the packet of biscuits with the full tin of condensed milk while you’re stopped at the lights. Also, if you don’t have quite enough biscuits, add a little more coconut. Or use less butter. If you’re reading this while running to the shops, a 200g packet of dried cranberries will give you enough for the base and the topping, while a 250g block of Whittaker’s white chocolate will fulfill all your chocolate needs.

For the icing:
125g white chocolate
50g butter
1 cup icing sugar
juice of an orange (use the one you zested above)
1/2 cup dried cranberries

Line a 20 x 25cm tin (or thereabouts) with baking paper, leaving enough overhanging the sides that you can use to pull it out later.
Melt the butter and condensed milk together over low heat in a large pot. Let cool briefly, then tip in the biscuits, coconut, most of the orange zest, cranberries and chocolate. Stir to mix, then tip into the prepared tin. Press down (the overhanging paper will help here) to smooth the top. Put in the freezer.
Use the same pot to make the icing. Melt the butter and white chocolate over very, very low heat. Sift in the icing sugar and stir well, then squeeze in a little orange juice at a time until it forms a thick, spreadable mixture. Pour over the biscuit base, then sprinkle the cranberries and reserved orange zest on top. Return to the freezer for 5-10 minutes before slicing and racing out the door.
If your life is more leisurely, let the icing set in the fridge before slicing. Store in an airtight container in the fridge.