This is a story I may have told before, but bear with me. Once upon a time, when I worked at a regional newspaper, a very, very angry reader drove all the way out to the office with a plate of biscuits he’d made. This wasn’t a gesture of generosity, but of rage. He’d made the biscuits to a recipe that was published in the newspaper and he was disappointed by the results. He complained that they were inedible and that we must have left the sugar out by accident. I apologised profusely and said I’d check the recipe with its author.

When I did, she was bemused. “No,” she said, “there’s no mistake. They’re just not very sweet biscuits.” 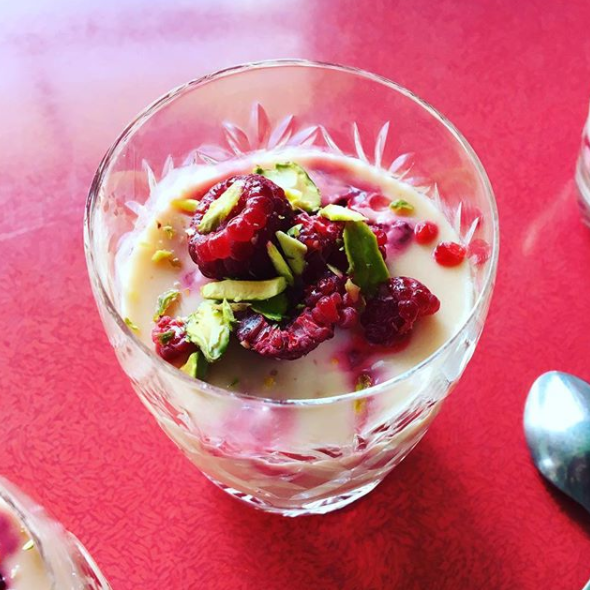 This is NOT a tiramisu – it’s the raspberry and lemon posset that appears alongside it in the original publication. We ate the test tiramisu too fast to photograph it (it’s that good!)

This was no comfort to the angry man, who was nearing apoplexy. After he calmed down a bit he revealed that he’d made the biscuits for the nurses who were looking after his ill wife in hospital. These nurses had then complained that they weren’t very nice (I know!). So really, it wasn’t about the biscuits at all. In the end we parted on good terms and the rest of the newsroom got some unexpected morning tea. He was right, the biscuits weren’t that nice, but they were made to the exact recipe.

I’m bringing this up now because this week I made a mistake in a recipe printed in The Dominion Post, the Waikato Times and The Press. I left an instruction out and this has made some readers very cross. I picked it up quick enough for it to be amended online, but once a runaway horse has bolted the print stable it’s very hard to get it back.

So, if you are looking at my recipe for Black Doris plum and white chocolate tiramisu and thinking, ‘where does the melted chocolate go?’, I’m sorry. The full recipe is below – with the missing instruction in bold. I wish I could say that there was a good reason for the error but the truth is, I’m only human. I will be more careful next time. Thank you to the people who have gotten in touch (even the ones who sent some rather cross emails) – I hope the mistake doesn’t put you off making the tiramisu because it really is delectable.

BLACK DORIS PLUM AND WHITE CHOCOLATE TIRAMISU
Serves 6-8
Preparation time: 30 minutes (plus 6-12 hours’ chilling time)
Cooking time: nil
A classic tiramisu is a heady confection of coffee and dark chocolate – delicious, but a recipe for a terrible night’s sleep. This fruity version is slightly lighter but no less delectable. To make it alcohol-free, use extra syrup from the plums as the liquid. Look for the Italian sponge fingers, also known as savoiardi, in the “international foods” section of the supermarket, or try a Mediterranean foods store.
1 x 825g tin black doris plums in syrup
200g white chocolate
4 eggs, separated
4 tablespoons caster sugar
Finely grated zest of 1 lemon
250g mascarpone
5 tablespoons limoncello
16-20 Italian sponge fingers
Set a sieve over a bowl. Pour in the plums and leave to drain for a few minutes. Reserve the syrup. Remove all the stones from the plums. Mash them slightly with a fork and set aside.
Break up 150g of the chocolate and put in a small bowl that will fit snugly into the top of a small saucepan. Put about three centimetres of water in the saucepan and set over medium heat. Don’t let the water boil. As soon as the chocolate has melted, remove it from the heat (being careful not to get any water in the chocolate). Set aside.
Put the egg yolks, caster sugar and lemon zest in a bowl. Whip until pale, thick and mousse-y (using electric beaters is easiest). Fold in the mascarpone and the melted white chocolate.
Wash and dry the beaters, ensuring there is no egg yolk mixture left on them. Put the egg whites in a separate bowl and whip until they form stiff peaks. Fold them very gently into the egg yolk mixture.
Pour the limoncello and five tablespoons of the reserved plum syrup into a shallow dish. Dip about eight to 10 sponge fingers into this liquid, then fit them into the bottom of a glass bowl (the sort that your mum makes trifle in).
Pour half the egg and mascarpone mixture on top, followed by half of the plums. Dip the remaining sponge fingers into the liquid and arrange neatly on top of the plums. Spread the remainder of the plums on top, followed by the remaining egg mixture.
Roughly chop the remaining 50g white chocolate and sprinkle over the top. Cover tightly and chill for at least six hours (preferably overnight) before serving.