The Small Girl is going through what child experts call a developmental phase. In other words, she is turning into one of those children that kicks, screams, wails – and refuses to eat. I know it’s not about me, but it breaks my heart when she pushes away the things I’ve made for her, even if it’s a piece of toast. Actually, toast is one of the few things she will eat. Toast, plain penne, peas and crackers. Her attitude to food reminds me of a sign I once saw above a racecourse cafe: “If you can’t fry it, don’t buy it.” Now I know why people end up feeding their children Turkey Twizzlers and McDonalds, because they are emotionally ruined by years of tantrums at dinner time. But before Social Services come and take me away, I want it on record that the empty fish finger packet in our recycling bin is not a sign of my unfit mothering. No, I bought fish fingers (‘Simply Natural Oat Crumbed Hoki Fillets’) because I genuinely love them. I KNOW they’re only 50 per cent fish and that the crumb coating is nothing more than a cellulite enhancer, but there’s something about fish fingers that I find inherently comforting. They have to be crumbed though – I haven’t fallen so far that I’ll eat those vile faux tempura ones. Anyway, every now and then we have them with the Boy Wonder’s home made oven chips and my new favourite invention, Yoghurt Tartare Sauce. It makes me feel less guilty about my culinary failings and momentarily distracts me from my maternal ones.

Yoghurt Tartare Sauce
Pour about a cup of natural, unsweetened yoghurt into a pretty serving bowl. Add the zest and juice of a lemon, a tablespoon of Dijon mustard, a tiny clove of garlic (crushed with some salt), a tablespoon of capers and a few finely chopped gherkins (about 1/3 of a cup). Stir gently to mix, then taste for seasoning. Good with fish and chips, even if they’ve come out of a packet.

Holidays are all very well, but it’s nice to be finally home in our new house. After a complete break from all kitchen activities for the last week or so I am looking forward to stocking the pantry and working out the quirks of our fancy new oven. Actually, there are two ovens! And gas hobs! Hope you all have a sweet weekend wherever you are…

Sshhhhh… I’m not supposed to be blogging, I’m supposed to be having a quick look for a birthday present for the Boy Wonder’s mum and getting dressed and getting organised to leave the house. But then I spotted this charm from the ever-so-lovely Black Dawg Studio and it was too cute not to share. There are lots more, including a very cool coffee-inspired one – but I have to dash! 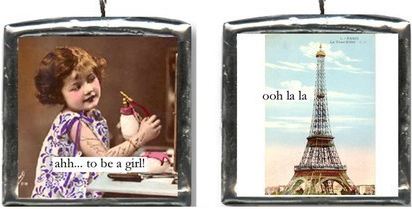 The last time I stayed with my in-laws, in their tiny town on New Zealand’s wild West Coast, I nearly caused a diplomatic incident. It was the long, hot summer of 2008 and we were waiting for our visas to be extended so we could return to London and continue tripping about Europe like a pair of Antipodean gypsies. The Boy Wonder was in heaven, playing cricket every day and gambling at the pub with his little brother. I, on the other hand, ran on the beach, reads lots of books and perfected my entry for the local A&P show.
These shows are a Kiwi summer institution, where plants, produce and baking are judged along with animals, flower arranging displays and tractors. There are ferris wheels and candy floss, shy teenagers and ruddy-faced men in tweed hats.

I decided to enter the baking section as a sort of post-modern feminist statement (and because I was really bored). My in-laws were most amused, but not as much as when my fruit loaf beat off all other contenders and I came home with a photocopied certificate. The Boy Wonder’s aunt still laughs at the memory of overhearing two local stalwarts looking at my name beside my prizewinning loaf. “Who’s that?” one asked the other. “Never heard of her,” the other one sniffed.

Juicy Fruit Loaf
This moist, tangy loaf has no butter, oil or eggs, but plenty of punchy fruit flavours. Given the chance, it keeps well in an airtight container. This recipe was emailed to me via a forum and I suspect it may be the brainchild of foodwriter Joan Bishop, even though the authorship was never made clear. Thank you Joan, it’s amazing.

Grease and line a 6-7 cup capacity loaf tin and preheat the oven to 170C.
Put the dried fruit, carrot, orange and lemon juice and zest and brown sugar into a large saucepan. Bring to the boil and let simmer, uncovered, for five minutes. Let cool to room temperature, then gently stir in the sliced bananas. Sift in the dry ingredients (flour, cinnamon and baking soda) and mix well, then scrape into the loaf tin. Bake for about an hour, or until a skewer comes out clean. Let cool in the tin for five minutes, then turn out onto a cake rack.