The new man of my dreams is Dean Brettschneider, a New Zealand baker who counts Rick Stein, Peter Gordon and Anton Mosiman among his fans thanks to his amazing ways with bread and patisserie. You should see his buns, not to mention his fig and aniseed scone twist or apricot and pistachio tart! But the path of true love never runs smooth and we are going to be parted by the cruel forces of the public library. 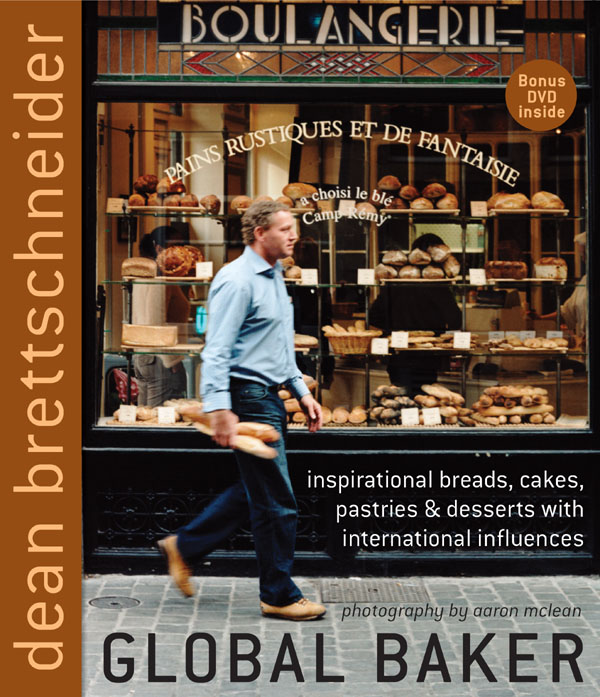 I found his book, Global Baker, wedged between tomes on wedding cakes and muffins in the part of the library usually frequented by derelicts in search of a cosy place to snooze. It’s a brilliant collection of advice and recipes for everything from pain au levain to spun sugar cages. Dean (we’re on first-name terms) now works in Shanghai, where he has introduced the Chinese to the delights of chocolate hot cross buns, baked cheesecakes and lamingtons made with red bean paste. I love him. I told the Boy Wonder that I was going to run away to learn the secrets of amazing baking from a man I’d never met. He said, “Great. Have you seen my cellphone?”

I haven’t actually made anything out of his book. Yet. But when I get my own copy I’m going to start at the almond croissants and work all the way through to the xiang cong hua juan bao (Chinese flower steam buns). It’s all about spreading the love.

Some days, when I am being Mrs Super Organised, I start thinking about what we’re going to have for dinner as soon as I get up. I take something out of the freezer, or do bits of prep throughout the day, and dinner magically appears.

Other days, it’s a bit more of a challenge. This kitchen is blessed with a big old-fashioned pantry, but there’s nothing more depressing than opening the door to find the shelves are nearly bare (or filled with things that don’t work together, like Valhrona chocolate, basmati rice and two jars of star anise. Actually, that might be quite a combination. But I digress.) But then I found a can of cannellini beans behind a jar of molasses and something clicked. Of course! Posh baked beans – a kind of vegetarian chilli with enough sweetness and heat to chase away the Monday blues and stave off the cold winds whistling in the back door.
Even better, this is easy to make and requires little attention (so you can do it while dancing the toddler two-step – the dance you do when there’s a small person clinging to your legs).

This is how I did this last night – but feel free to substitute as fits your own bare pantry.

Saute the onions and garlic in the oil until soft (or while you feed a small person). Add the cumin and chilli and saute for a minute or two more. Add the soy sauce, tomatoes, water and molasses. Stir well and let bubble for a minute or two. Add the drained beans, a squeeze of lemon juice and season to taste. Let bubble away gently for five minutes. At this point you can turn off the heat and wander away to do something else, like make a phone call, have a cup of tea, put a small person in the bath or all of the above.
When you’re ready to eat, cook some rice and greens, or whip up a salad and slice some crunchy bread. This serves two starving, greedy, stressed adults (so there’s enough for three or four more moderate eaters). Now, what are we going to have tonight?

Bills to pay, wet washing to wrangle, work to do… time for a burst of French sunshine via Coeur de Pirate.

There’s a lot of angst in the developed (read: affluent) world about healthy eating; a lot of handwringing and deep thought and worry when we all know we have nothing to complain about when so many are going hungry.

But every once in a while it’s good to lighten up and treat yourself – or be treated. I think the definition of the perfect present is something that you’d love but never buy. So it is with these beauties,brought over by a good fairy. I wish they’d invent scratch ‘n sniff computer screens so you could try them too.

They might look like ordinary fairy cakes but once you bite in there’s a whole lot of crazy stuff going on. That Barbie-pink carapace of glace icing hides a thin layer of sponge, a thick, creamy dollop of blueberry buttercream and a crisp shortcrust base.

If I could figure out how to make these I’d make a mint (which I’d then have to spend on elasticated waistbands, new teeth and a sugar-proof liver). Perhaps it’s better to leave some things to the professionals.

Wishing you all a sweet, sweet Friday and a happy weekend. We’re off to hunt for a new kitchen (and a house!)