A mystery visitor changed my life last Friday. I went out for a few hours and returned home to find crumbs all over the kitchen floor and a tea towel draped artistically over the stovetop. Now, neither of these things are that unusual – our floors are usually so covered in crumbs it looks like Hansel and Gretel have been passing through and tea towels are often appropriated by a pair of small hands to make doll beds or princess dresses. But the strange formation of these crumbs, and the teatowel’s odd positioning, spoke of something else. All at once it dawned on me – the oven man had come! I jumped up and down on the spot beside the oven, both in utter joy and to test whether or not the door was going to fall open. It didn’t budge. I pulled on the door handle and it reluctantly opened, eager to spring back into position. I was so excited I took a video of myself opening the oven door and sent it to my beloved. “This is one of the nicest things you’ve ever done for me,” I wrote.

You may think this indicates that a) I need to get out more and b) that my relationship is in serious trouble, but if you’d spent the last 18 months grappling with an oven that didn’t close properly, you’d be excited too. I’ve spent all weekend marvelling at how easy it is to cook things when the oven door doesn’t fall open at whim and how quickly the oven heats up now that half the heat isn’t escaping. One of the first things I made was a spelt version of my ye olde DIY Vogels bread. Here’s how I did it. 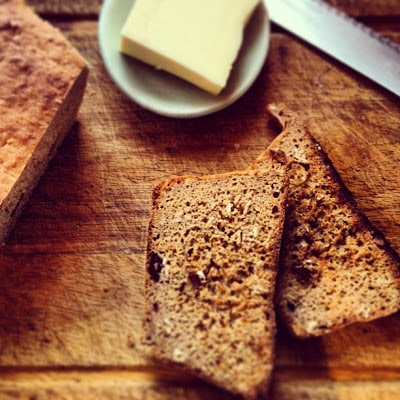 No-knead spelt bread
I’m on a bit of a spelt kick at the moment, not least because I can buy organic spelt flour from a great shop just minutes away – but most supermarkets stock it now too. If you can boil a kettle and stir (not simultaneously), then you can make this bread. I use my own toasted muesli – like this one or this one – when making this but any decent bought one will suffice. If you leave it out, consider throwing in some seeds instead.

Put everything into a large bowl and mix well – it will be like porridge. Scrape into a very-well oiled and lined large loaf tin (internal measurements roughly 20cm x 10cm x 8cm).
Put into a cold oven and turn the dial to 50C. Leave for about 25 minutes, until the dough has risen to the top of the tin. Turn the heat to 200C and bake for another 40 minutes, until crusty on top and hollow when you tap it on the bottom.
Turn out to a rack to cool. This makes excellent toast, or you can cut it into canape-sized bits and have it with cream cheese and pickled ginger or smoked salmon.

What was the best thing that happened to your kitchen last week?

The man of the house is currently brushing up on his French skills and this means getting me to help him with his homework. Once upon a time, this would have been easy, but the passing of time means my brain doesn’t operate in French as well as it used to (or, indeed, as I imagined it once did). I’ve been feeling quite depressed about this, but am consoling myself with the fact that my menu French is still better than his. And when I looked up the Larousse to get a proper dictionary definition of ‘pate’, I didn’t need another dictionary to explain the answer. So I can’t be too badly off, can I?

Smoked salmon and wasabi pate
For the record, Larousse defines ‘pate’ as ‘preparation de charcuterie de texture tres variable et composee de viandes et d’abats en morceaux ou en pate fine et de differents ingredients’ and you don’t need to know much French to figure out that there are (mercifully) no ‘viandes’ (or ‘abats’ – organs) in a smoked salmon version. But I had to call it something other than ‘a sort of spread-y thing you can have on toast or crackers or on little bits of cucumber like an 80s canape’, didn’t I?
This is inspired by something in Jamie Oliver’s book on British food – he makes something similar with smoked trout and horseradish and serves it with baby Yorkshire puddings. And cor blimey, guv’nor, it is bloomin’ lovely. Or c’est absolument delicieux, as our French friends would say.

Put the cream cheese, lemon zest and 1/4 teaspoon of wasabi in a small bowl and beat with a fork until smooth. Taste it for hotness – the wasabi should be present, but not overpowering. Keep adding it until you think it’s about right. Flake in the hot smoked salmon and dill or mint. Fold it into the cream cheese, adding a little lemon juice if it seems a bit stiff. Taste again for seasoning – add some salt and freshly cracked black pepper until the balance is right. Scrape into a little bowl and cover, then store in the fridge. Makes enough for six people as a canape, with enough for one lucky person to have on toast the next morning.

Quite apart from the hijinks of Fashion Week (hey, it wasn’t exactly Milan, but you have to take your excitement where you find it in this life), we seem to be on the party circuit at the moment. These are the sorts of parties that involve fairy bread, sausage rolls, cake smothered in pink icing and at least one participant in tears before last orders.

Since we have a birthday party of our own coming up in May, I’m beginning to get quite nervous. It was bad enough last month, trying to keep up with the play when my father-in-law had a bash to mark a significant birthday. I rashly volunteered to make sandwiches, then had to talk my mother-in-law out of them being complicated club affairs involving several fillings and an anxious amount of cutting. “Let’s just have classic chicken and tarragon,” I said airily, before remembering I was in a place where tarragon was harder to come by than gold bars. Instead, I whipped up what I thought was the perfect chicken sandwich while small children ran amok in the kitchen and old ladies waged war in the living room. Here’s how I did it. 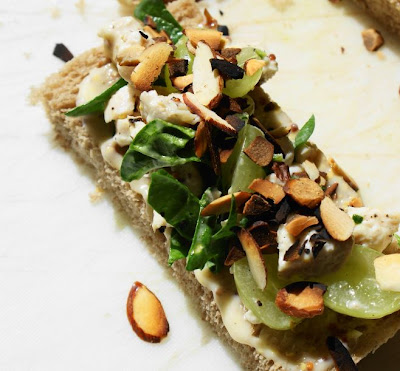 The perfect chicken sandwich
This isn’t so much a recipe as a set of general guidelines. To me, a good sandwich has different textures, balanced flavours and good bread.
The cornerstone of these chicken sandwiches is a good mayonnaise – and by that I’m afraid I mean a real one. Trust me, making mayonnaise is easy and much faster than a trip to the shop to buy a jar of Best Foods’  finest. The other trick to good sandwich making, especially for a party situation, is preparation. Get everything ready and set yourself up like a miniature sandwich bar. It’ll be a good skill to have when the revolution comes.

1 batch of homemade mayonnaise, to which you have added 2 Tbsp wholegrain mustard
four handfuls of spinach, finely shredded
1 large cooked chicken breast (poached or roasted), cut into 1cm dice
3/4 cup slivered almonds, toasted and cooled
1 cup green grapes, halved
salt and pepper
12 slices from a loaf of bread – light rye is good
Put the diced chicken breast in a small bowl and fold through 3-4 tablespoons of mayonnaise. It should be lightly coated rather than drowning in the stuff. Toss through the spinach. Season with salt and pepper to taste.
Lay six slices of bread on a clean worksurface and spread with mayonnaise. Grind over some black pepper. Cover each with the chicken and spinach mixture, then scatter over the grapes and almonds.
Spread the remaining six slices of bread with mayonnaise and put on top of each sandwich. Press down lightly, then trim off the crusts. Cut each sandwich into elegant fingers and arrange on a plate. Cover with a damp cloth if not serving immediately. 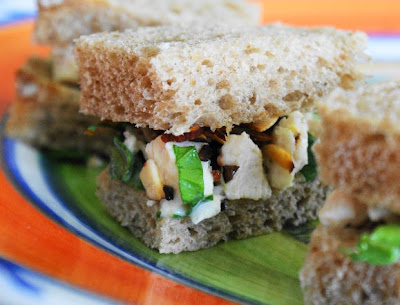 What do you put in your chicken sandwiches?

This might sound strange, given I earn my living by tapping away at a keyboard, but one of my resolutions for 2013 is to spend less time online. It’s so easy now to get caught in the interweb that some days I feel I spend more time interacting with virtual life than the real thing. That doesn’t mean I’ll be giving up entirely – I mean, I have this blog to feed, delectable things like this to marvel at and a shoe habit to maintain – but I want to spend more time doing things that don’t require a broadband connection. Pottering about in the kitchen with friends over the holidays was a good reminder of the benefits of actual reality. 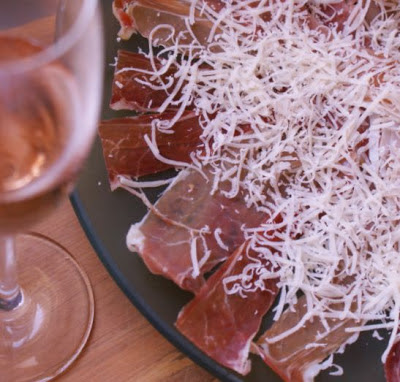 Parmigiano e prosciutto alla Bess
This was one of the things lovely Bess whipped up for our New Year’s Eve feast. Her brother, a chef who divides his time between Martha’s Vineyard and New Zealand, taught it to her and in an ideal world, I’d be at your place making it for you. Instead, invite someone over to your place and show them how to make it.

Lay the slices of prosciutto on a flat plate. Grate over the cheese, then drizzle with the oil. Serve with glasses of prosecco (or best local equivalent). Cheers!

What foodie trick have you learned in ‘real life’ lately?

One of the things I love about the Boy Wonder is his gregariousness. In his gung-ho reporter days he’d winkle stories out of anyone – if they were bad eggs it was often to their regret – and I used to give him a stern talking-to before we went anywhere so he wouldn’t accidentally-on-purpose interrogate my friends.

If he’s not making people divulge their life story, he’s probably telling them to come over for a drink. At times last summer I felt like we were running a bar and I was a short order canape maker. I came across these photos the other day and remembered churning out lots of these little cheesy puffs. I think I’m just about ready to make them again. 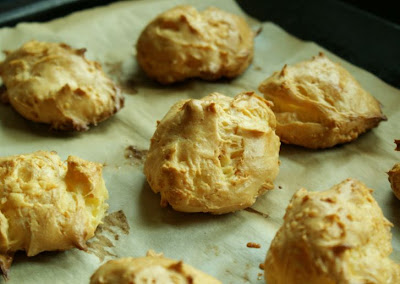 I’ve made these for years in all sorts of places, some better equipped than others. While beating the mixture in a food processor does make it a bit easier, I think the hassle of washing all the parts afterwards is hardly worth it. Equip yourself with a sturdy wooden spoon and go to it. Line the tray with baking paper and you’ll only have one pot to wash.

Gougeres are orginally from Burgundy and if you’re doing them the proper French way you should use gruyere. But I say, use whatever cheese comes to hand. No one will complain, trust me.

Heat the oven to 210C and line a tray with nonstick baking paper.

Put the butter, water and salt in a large pot and bring to the boil. When the butter has melted, tip in the flour and stir well. Turn down the heat and keep stirring until the dough forms a ball. Keep stirring this ball around the pot for about another minute, then remove from the heat and add one of the eggs. Beat like fury until it is all amalgamated, then repeat with the remaining eggs, one at a time. When the mixture is smooth and shiny, beat in the cheese.

Scrape spoonful-sized heaps onto the baking tray. Bake for 10-15 minutes, until the gougeres are golden and puffed up. Eat immediately with a glass of something cold.

Do you have a favourite recipe for what Nigella calls ‘unhappy hour’?