If you’re lucky, you’ll have memories of your parents or grandparents pickling and preserving up a storm at this time of year. My mother wasn’t a great jam-maker, but she made a killer tomato sauce that we all remember fondly, probably more so because the recipe has been lost to history. Modern food culture makes preserving summer’s bounty less necessary than it used to be, but it’s still a fun thing to do. Making smaller batches – and using a few convenient shortcuts – means you can pickle or preserve after work rather than having to set aside a whole weekend. Put in a little time and energy now and your investment will pay off in the cold, damp months ahead.

LIFE-PRESERVING TIPS
Follow these golden rules if you want your preserving efforts to be successful:

Is a barbecue sausage really a barbecue sausage without a splash of homemade plum sauce on the side? This one uses pre-prepared chipotle peppers in adobo sauce (look for them in the ‘Mexican’ section at the supermarket) to give it a little more kick. While it’s magic with a traditional pork sausage, this tangy sauce also goes well with deep-fried tofu or in a cheese toasted sandwich. It can be used immediately, but the flavours will deepen over time.

Put the plums, onions, ginger, garlic and sultanas in a large, heavy pot with 1 cup of the vinegar. Simmer over medium heat, stirring occasionally, for about 30 minutes or until the plums and onions are very soft. Transfer to a food processor (or use a stick blender in the pot) and add the chipotle peppers. Puree until smooth. Return to the pot and add the sugar, salt, spices and remaining 1 cup vinegar. Simmer over low heat for 20-30 minutes, until thickened (remember it will thicken further as it cools). Leave to cool, then pour into sterilised sauce bottles. Cap tightly and store in a cool, dark place.  ‌‌

I’m just about asleep when I hear it the first time. It’s a dull, definite thud, just outside the back door. There’s no wind and no traffic noise, just the moreporks saying good night to each other. Then it happens again. Thud. Thud. Thud. I freeze in alarm. “Did you hear that?” I hiss. “Mmmm, he says sleepily. “It’ll be a cat or something. Don’t worry about it.” I’m not convinced, but I’m not getting up to look either. I put my head under the duvet and go to sleep.

The next morning I’m standing in the kitchen drinking a cup of tea and it happens again. Thud. Thud. I look out the window. There’s no cat. Then I see them, half a dozen green fruit that have landed heavily on the deck. The feijoas have arrived.

About six years ago we planted five feijoa trees along a north-facing fenceline in our garden. One of them snapped in two during a gale, but the others have soldiered on. In December, they’re covered in beautiful red flowers, like early Christmas decorations. I’ve neglected ours terribly in the last year (it’s hard to care for your garden from the other side of the world) but this autumn we’ve had the biggest crop ever. The first fruits started dropping in at the beginning of April and we’re still collecting dozens every day. A fruit bowl isn’t big enough – we’re currently using a 5kg apple box that never seems to empty, no matter how many I eat. I’ve long since lost the piece of paper on which I wrote down what varieties of trees we planted (possibly a Mammoth, a Eureka, a Bambino and an Apollo?) but some fruit are giant, others are doll-sized.

Since this year’s harvest has coincided with quarantine, I’ve become obsessed with trying to find ways to use them up. Discovering Kristina Jensen’s incredible Chunky Monkey Feijoa Chutney was a revelation. This is an extremely low-stress, low-energy pickle. There’s no peeling, making it a genius way to use up all the little feijoas that are a pain to peel.

This Feijoa, Ginger and Coconut Crumble Shortcake recipe I created for Be Well magazine in the NZ Herald – and ironically had to buy feijoas to make it (when they were $16.99 a kilo back in mid-March!) – has been hugely popular, with lots of people sending me photos of their version.

My latest experiment has been making Feijoa Skin Syrup. Syrups are a big thing in France, with shelves and shelves of all manner of fruity versions in supermarkets. Some are organic, artisanal ones with hand-drawn labels and pretty glass bottles, others come in 2-litre tins and taste suspiciously of factory-generated ‘fruit flavours’. I don’t like fruit juices or fizzy drinks, but last year I became quite partial to a slosh of sirop au citron in a glass of soda water. This one is even better, not least because it’s zero-waste.

This is as simple as it gets. If you’ve got access to oranges or lemons, add a squeeze of juice and some finely pared rind instead of the lemon verbena. Feijoa skins can be frozen for this recipe. Makes about 500ml.

Put everything in a small pot set over medium heat. Stir to dissolve the sugar, then leave to simmer very gently for about 25 minutes (or until the whole house is perfumed). Remove from the heat and leave to cool, then pour through a sieve into sterilised glass bottles. To serve, pour a splash of syrup into a glass and top up with ice and soda (or a splash of vodka or gin). Store syrup in the fridge.

Want more ways to use up your feijoas? Try these:

If you’re an organised person, you’ve probably spent the last month pickling and bottling your summer harvest. (If reports of queues outside New Zealand supermarkets were anything to go by yesterday, then you probably spent yesterday panic-buying hand sanitiser and disinfectant.) Not me, on either count. As in most parts of my life, I’m the cricket who sang all summer and then realised they should have been storing stuff away for winter. I mean, you should see my Kiwisaver.

The good news is that you can have your fun – and your pickles – without all the hassle you might think is involved in such a task. Once you learn how to make fridge pickles, you’ll be every bit as smug as one of those people who does everything in advance.

How to make fridge pickles

To make a basic cold pickle brine, use a 1:1 ratio of water to vinegar, plus salt, sugar and flavourings (whole spices, garlic, chillies) to taste. Use your favourite kind of vinegar – I think white wine vinegar from the under counter wine cooler or apple cider vinegar are best. Here’s a sample pickling brew to give you an idea:

Put everything in a small pot set over medium heat. Stir well until the mixture is hot and the salt and sugar are dissolved. Add the spices/flavourings of your choice – about 1 tsp whole seeds to a cup of brine. Taste it to make sure you like the flavour – adjust the salt and sugar accordingly.
Pack whatever washed (and/or peeled) vegetables you want to pickle in a sterilised jar (cleanliness is even better than godliness when it comes to pickling – wash jars in hot soapy water, rinse well and heat in a 120C oven for 20 minutes. Soak lids in boiling water for 10 minutes, then dry thoroughly with a clean tea towel). I recommend the following, either separately or in a mixture:

Make sure the vegetables take up all the room in the jar – but leave about a 2cm gap at the top. Pour over the brine to cover the vegetables, making sure there are no air bubbles (tap the jar on the bench to pop them, or poke around with a skewer). Seal tightly and store in the fridge until you’re ready to eat. These pickles can be eaten after 48 hours – and you’re best to consume them within two months.

Thanks to Amber Sturtz (of Taco Addicts fame) for an excellent pickling tutorial at a recent Welly Hospo Wahine event.

When I was a child, my father told me it was important to always eat the garnish on a restaurant plate or they would recycle it and use it for someone else. It took me a long time to understand this logic meant that the garnish I was being encouraged to eat – and because this was the 1980s, it was often an artfully carved radish or piece of parsley – was possibly the reject from another diner. Still, you have to admire his ‘waste-not, want-not’ mentality. Or something. 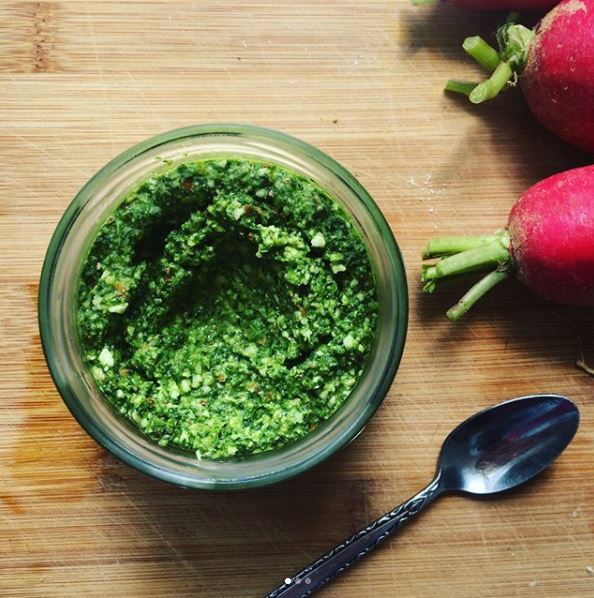 Anyway, over the summer I have been eating lots of radishes and wondering why they’re not more popular. They’re very ‘grammable, they’re easy to grow, they don’t offend many dietary restrictions – perhaps they’re just waiting for the right moment. I’ve also been wondering what to do with all the leaves apart from tucking them into the worm farm (I can’t bear buying trimmed radishes sealed in thick plastic, looking trapped and sweaty). So last week, while finishing off a column on radishes, I experimented with radish leaf pesto. It works a treat!

You can find the recipe – part of three ways to use radishes – here. If you have any other secret radish tips, let me know…