Given that it’s Shrove Tuesday tomorrow, I thought it was about time I showed you a pancake-related relic from my childhood…. 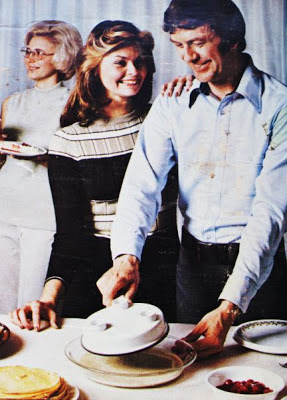 No, that’s not me, though I did think the woman in the foreground was very glamorous. It’s a shot from the box of the Monier Crepe Maker, straight out of the 1970s. 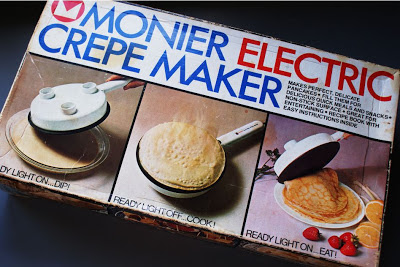 I don’t recall my parents hosting huge crepe-related soirees, though I do remember Mum using it occasionally (and letting me use it, when I was deemed responsible enough. I definitely remember reading the accompanying recipe booklet and wishing we could have Crepes Suzette. I was less keen on some of the other suggestions, such as ‘moistening a little corned beef with milk, then wrapping it in a crepe’.
It might seem a ridiculous, mono-use tool, but after trying it out yesterday I can confirm that it really does work just as easily as the box claims it will. Not bad for something that must be at least 35 years old (according to this Sydney Morning Herald advertisement). I’ve never been particularly good at making light, lacy crepes, but switching on the Monier yesterday gave me new confidence. Maybe it was the recipe on the box. 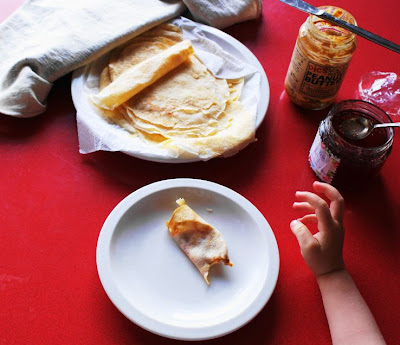 Monier Crepes
All batters are better after a resting period, but this one was good to go after 10 minutes. I’ve yet to try it out in a normal pan, but I’m sure it would still be fine, you just won’t look as cool as I do when you make them.

Whisk the eggs and flour together, then slowly add the milk and melted butter until you have a smooth batter. Rest in the fridge for at least 10 minutes before using. Makes about a dozen crepes.

Is there a Monier Crepe Maker in your past? What’s the secret to your best pancakes?

This was my Easter, or at least the bits I photographed.
Most of the time I was too busy – eating, standing at the kitchen sink, having a cup of tea, drinking a glass of wine, laughing – to take photos.
So you’ll just have to imagine the baked flounder with caper butter, the creme caramel, the Piedmontese peppers, the passionfruit cream biscuits and the Lebanese doughnuts with citrus syrup – or at least take my word for it that it was a great holiday. When’s the next one?

I think we will be eating a lot of green vegetables and very little chocolate this week.

How was your Easter?

Many moons ago, a suitor of mine once arrived on the doorstep bearing a charmingly vacuum-packed rabbit. It was an unexpected and unconventional gift, but it certainly tasted better than a bunch of roses. I wasn’t sure what to do with it but he produced a few notes written on the back of a restaurant menu. Using them as a basis, this is how we cooked it. 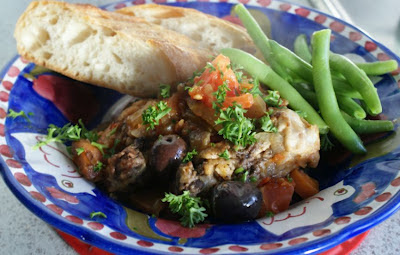 Braised rabbit with tomatoes and olives
Rest assured that you don’t have to sacrifice the family pet or go hunting for this Easter dinner. Farmed rabbits are available from good butchers, farmers markets and some supermarkets – and they are usually sold already ‘dressed’ (decapitated, skinned and cleaned) . If you flinch at the idea of eating one of the Flopsy Bunnies, substitute free-range organic chicken pieces for the rabbit.

1 rabbit (around 1.5kg), cut into pieces (ask the butcher to do this for you)
1/2-3/4 cup plain flour
salt and pepper
3-4 tbsp olive oil
2 red onions, finely chopped
2 carrots, peeled and finely chopped
2 ribs of celery, tough strings removed and finely chopped
2 cloves of garlic, finely chopped
150ml red wine
500g vine-ripened tomatoes (about five medium-sized ones)
Herbs: 1/2 a small bunch of fresh parsley (use the other half of the bunch for garnishing), several sprigs of thyme, a sprig of rosemary, a bay leaf
1 cup good quality black olives

Begin by putting the flour, a good pinch of salt and several grinds of black pepper in a plastic bag with the rabbit pieces. Close the top of the bag and shake well, ensuring the rabbit pieces are all covered with a nice dusting of flour. Remove from the bag and set aside (throw the unused flour away).

Blanch and peel the tomatoes – put them in a bowl, cover with boiling water and let sit for about 30-40 seconds. Lift out and nick the skins – they will lift off easily. Chop into chunks and set aside.

Heat the oil in a large, heavy pan and add the onions, carrots, celery and garlic. Saute over medium heat until starting to soften, then add the rabbit pieces, browning them on both sides. Pour in the wine and let it bubble away for a minute or two, then add the tomatoes and herbs. Cover and simmer very gently for 45 minutes to one hour, until the rabbit is cooked through and tender.

Stir in the olives and season with salt and pepper to taste. Scatter over some freshly chopped parsley before serving with steamed greens and hunks of chewy sourdough bread or crusty baguette. Feeds four. 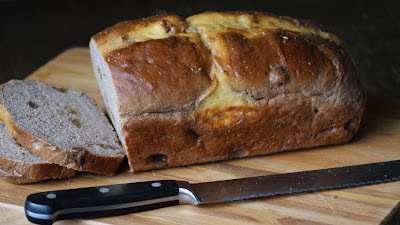 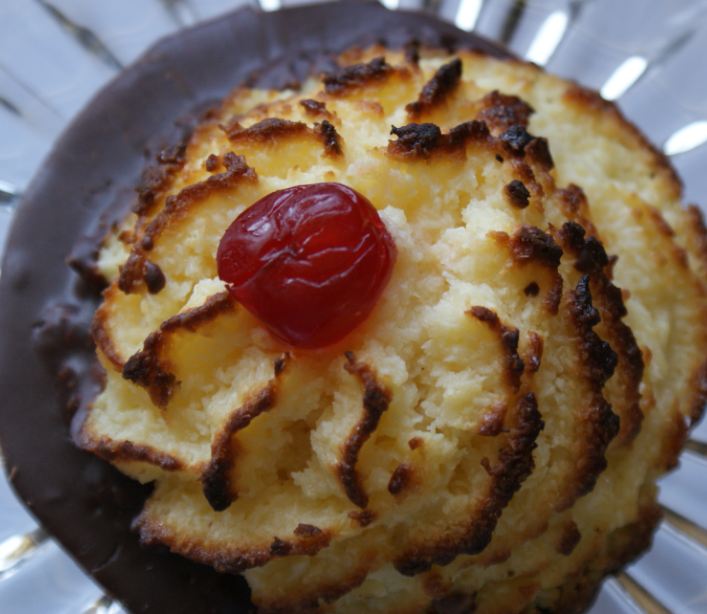 This is the guilty pleasure I mentioned in my list of food resolutions – a coconut macaroon from the supermarket. Looks benign enough, doesn’t it? Then take a look at this… 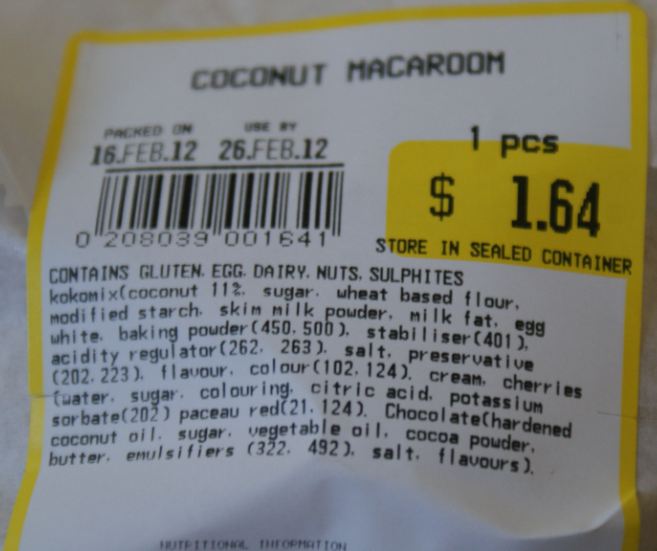 In case you can’t quite read the small print, there are more numbers here than in a maths textbook. Even the coconut is not quite coconut, but something called ‘Kokomix’ – which has lots of other goodies in it like milk fat, stabiliser, preservative, colour (colour? it’s white!) and modified starch. The most depressing thing is that the ‘chocolate’ is a mixture of cocoa powder and various fats – but it DOES have coconut oil, which I guess boosts the overall coconut factor a bit.

What this label doesn’t tell you though is that these toxic treats really are delicious. I first discovered them at an Italian cafe in town, where they cost three times as much despite being identical. Learning that they were on sale at the supermarket just a few minutes’ walk from work was my downfall towards the end of last year. Not now though. I am strong. I have willpower. And I am going to go one further and give up chocolate  for Lent. After all, my chocolate dependent friend Ann once gave it up for a year – surely I can manage six weeks, right? Especially since the chocolate on the macaroons doesn’t count…

Are you giving anything up for Lent? Or is retox, not detox, your motto?