Having missed the deadline for a winter solstice or Matariki celebration, we are planning a French dinner on Saturday night to celebrate Bastille Day. I suppose it should really be a Bastille tea party, so I can shriek ‘let them eat cake’ in the manner of poor, misquoted Marie Antoinette, but it’s harder to work coq au vin into an afternoon tea menu, n’est-ce pas? 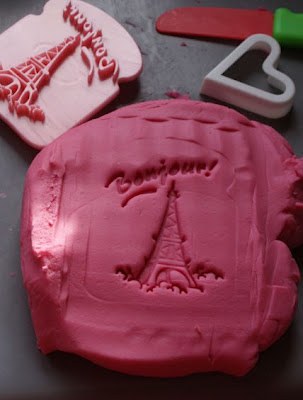 So, I’m thinking something cold to start, followed by coq au vin, a salad, cheese, pudding, Vanessa Paradis, Piaf – like a scene from one of my school French textbooks, but better.

What would you serve up at a Fete de la Bastille down under? Can you point me to the world’s best coq au vin recipe or your favourite terrine? And what on earth should we have for pudding?

We have started a new thing in our house where we draw up a monthly ‘to-do’ list. It’s all well and good at the beginning of the month, when you see 30-odd days stretching out before you, but by this stage there are things that will have to be shifted over to April (sigh).

So while I doubt the window seals will be replaced by the end of the week and there’s a good chance I’ll forget to take the car to the garage tomorrow, I have managed to tick ‘Fresh From The Oven croissants’ off the list. A week ago I would have thought any job was easier than tackling the flakiest of French pastries, but thanks to the amazing Karen Burns Booth and her detailed instructions, it was a breeze. Well, maybe not a breeze. But definitely a lot easier than I anticipated. 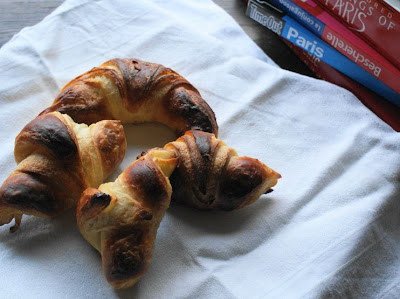 The only thing I would add is that if you’re using standard active dried yeast, dissolve it in the warm milk and water first, or it will take forever to rise (enriched doughs like this one are always slow, but undissolved yeast makes the process move at glacial speed). Also, don’t try to finish off the rolling process late at night after a glass of wine while your sister-in-law and spouse watch and make (un)helpful suggestions. You will get cross and the croissants will suffer.

The next time I make them I’ll be using the tips I found in this fantastic video, which makes the shaping process really easy to understand.  But that’s a project for April.

Have you made croissants before? Any tips?

This month’s Fresh From The Oven challenge, set by Claire of Purely Food, was to make fougasse.
“Bof,” I said to myself as I planned what to eat for a pre All Blacks vs France match dinner on Saturday night. “It will be a piece of gateau!”
Claire gave us two recipes to choose from, one from model-turned-baker Lorraine Pascal, the other from French chef Richard Bertinet. I made a rosemary-scented, olive-studded homage to Lorraine’s version on Saturday afternoon, but the yeast didn’t spring into life and they turned out more like Frenchified pretzels.
The next day, less distracted by le rugby, I had another go, remembering what I’d read from Bertinet’s recipe about “showing the dough who is boss”. These ones were much better, despite some woeful dough shaping on my behalf, resulting in some rather freeform fougasse. I might have taught the dough a lesson, but it was obviously determined to teach me one right back. 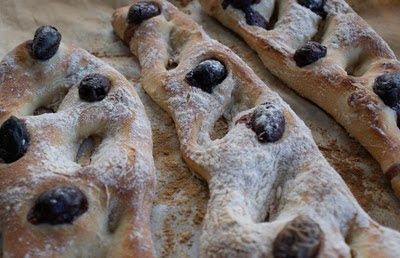 Fougasse
This is essentially Bertinet’s recipe, though my measurements are a little different and I’ve added a soupcon (note: that’s different to a soup spoon) of olive oil to enhance their keeping qualities. Silly really, because when these come out of the oven it’s impossible not to devour them immediately.

Pour the water into a mixing bowl and add the yeast. Stir to dissolve, then leave for five minutes to start frothing. Add the flour, salt and oil and mix together, then turn out onto the counter and knead. Following M. Bertinet’s instructions, I did this all by hand, but it is a very sticky dough and it would be a lot easier in a freestanding mixer (I know, I am lazy). Either way, you want the finished dough to be smooth, springy and not too sticky when you have finished kneading/mixing it. Resist the temptation to add too much extra flour. Scrape into a mixing bowl and cover with plastic. Let rest for an hour or so in a warm place.
At this point, turn your oven to its highest temperature and put in an oven tray.
Gently tip the risen dough out onto a floured surface, then dust generously with flour and cover again with a teatowel and let rest for five minutes.
Slice the dough in half with a very sharp knife or plastic scraper, then cut each piece again into three triangles. You’re aiming for a fern shape – whether you get there or not is another matter.
Slash cuts into each piece of dough – I used a pair of kitchen scissors – and gently open the cuts up with your fingers. Flour a large sheet of baking paper and place the slashed dough on top. Gently press olives or any other toppings into the dough.
Take the hot baking tray out of the oven (remember it’s hot!) and slide the dough and paper on top. Put in the oven and then splash in a little cold water on the walls (of the oven, not your kitchen) to create steam. Bake for 10-15 minutes, until golden.

Four years ago I was in Paris, hoppity skipping around the Stade de France and Parc des Princes in the name of work. A lucky break meant I got a job working at the Rugby World Cup, reporting on the efforts of the Samoa team (until they got knocked out of the tournament) and bossing around a motley crew of international journalists at matches in Paris. It was the best of times (It was Paris. Need I say more?), it was the worst of times (you try going to a press conference and asking questions in French about a sport you know nothing about, or dealing with pouty French men who won’t do what they’re told by a stroppy Antipodean).

I’d never been remotely interested in le rugby, in fact I’d gone out of my way to avoid it. But in Paris it became a great passport: “Ah, vous etes neo-zelandaise? Allez les All Blacks!” It was all great fun, until France beat New Zealand in the quarter-final. Actually, that’s a lie. It was still fun after that. Tomorrow night, the two teams face each other again. I won’t be sitting in a bar in Paris, but I will be eating slices of this classic French cake. It’s the least I can do… 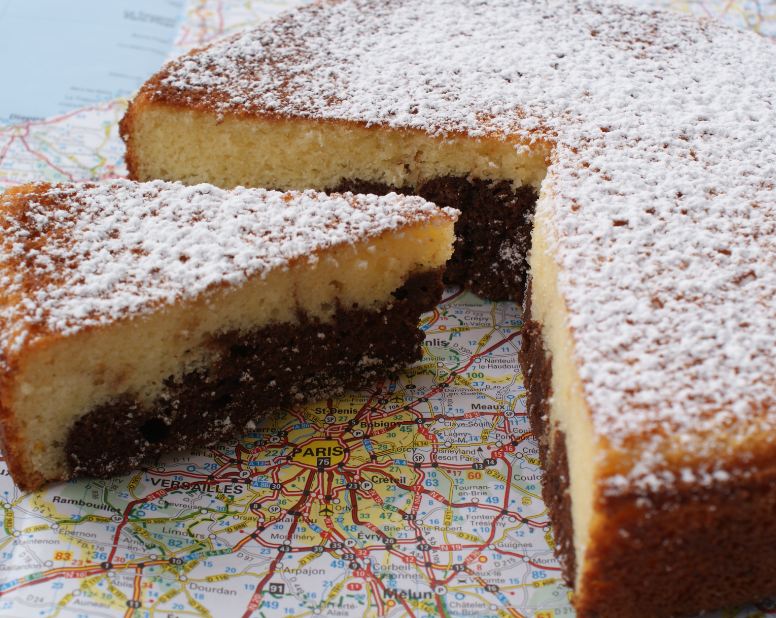 French Yoghurt Cake – Gateau Yaourt
If you believe everything you read, gateau yaourt is the sort of cake that every French housewife makes (presumably in between flirting with the butcher, telling off the baker, having a torrid affair with the milkman, wearing Chanel No.5 and not getting fat). It’s very simple to make and usually flavoured with rum (or “rrrrhuuum”). This version, adapted from Susan Loomis’ ‘On Rue Tatin’, is a bit fancier thanks to the addition of melted chocolate. The end result is supposed to be a bit more marbled than the one pictured, but things don’t always go to plan. Ask les All Blacks.

Preheat the oven to 190C and grease and line a 24cm tin. Beat the eggs and sugar together until pale and fluffy. Sift in the flour, baking powder and salt and beat in, then fold in the yoghurt and melted butter. Pour half the batter into the prepared tin, then add the melted chocolate to the remaining batter. Mix well, then pour this into the cake tin. Swirl the mixtures together with a flat knife to marble. Bake for 30-35 minutes, until the cake passes the skewer test and bounces back slightly when you touch it. Let cool for 10 minutes, then turn out onto a rack to cool completely. Dust with icing sugar to serve.

I’d like to tell you that I’ve invented the best hot cross bun recipe ever, but that would be a terrible lie. 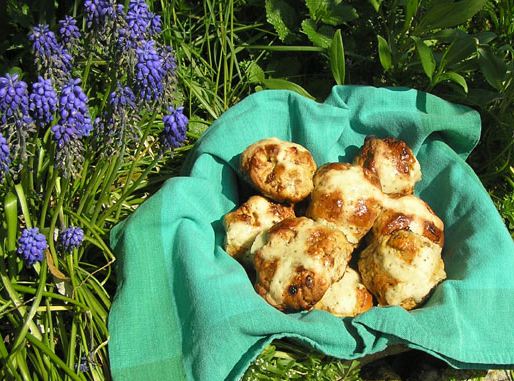 These ones pictured are Nigella’s recipe, which I first made the year we drove around Europe in a small red car with a cheese knife and a corkscrew in the glovebox (we had a sack of flour and other sundry foodstuffs on the back seat). I’ve never made them with such success since, but perhaps my changed lifestyle has something to do with that.
Unsurprisingly, I think St Delia has the best recipe, or at least the one I’ve found to be the best. The only advice I can give you is to go easy on the cinnamon as it retards yeast development and make them somewhere warm.
We were only allowed hot cross buns on Good Friday when I was growing up and I mostly stick to the same rule. So tomorrow I’ll be attempting to make them in a breadmaker at my parents’ house… since they’ll be the first of the year, they better be good!

Do you have any hot cross bun secrets? Let me know! In the meantime, have a wonderful Easter and a happy weekend x