There’s a long weekend on the horizon and – though the weather is unlikely to be playing ball – I’m still hopeful that there will be enough sunshine for a picnic.

This week’s Three Ways With… has a trio of picnic-friendly recipes for you to try. If all else fails, eat them while sitting on a picnic blanket in the lounge. Add lashings of ginger beer and some spy-catching for a frisson of Famous Five-style fun.

Let’s get something straight: I’ve never been one to join in the ‘fun’ of St Patrick’s Day. Not for me the early morning pints of Guinness, the purposeful wearing of Kelly green or the joining of parades on March 17. Not my circus, not my monkeys, as the saying goes. 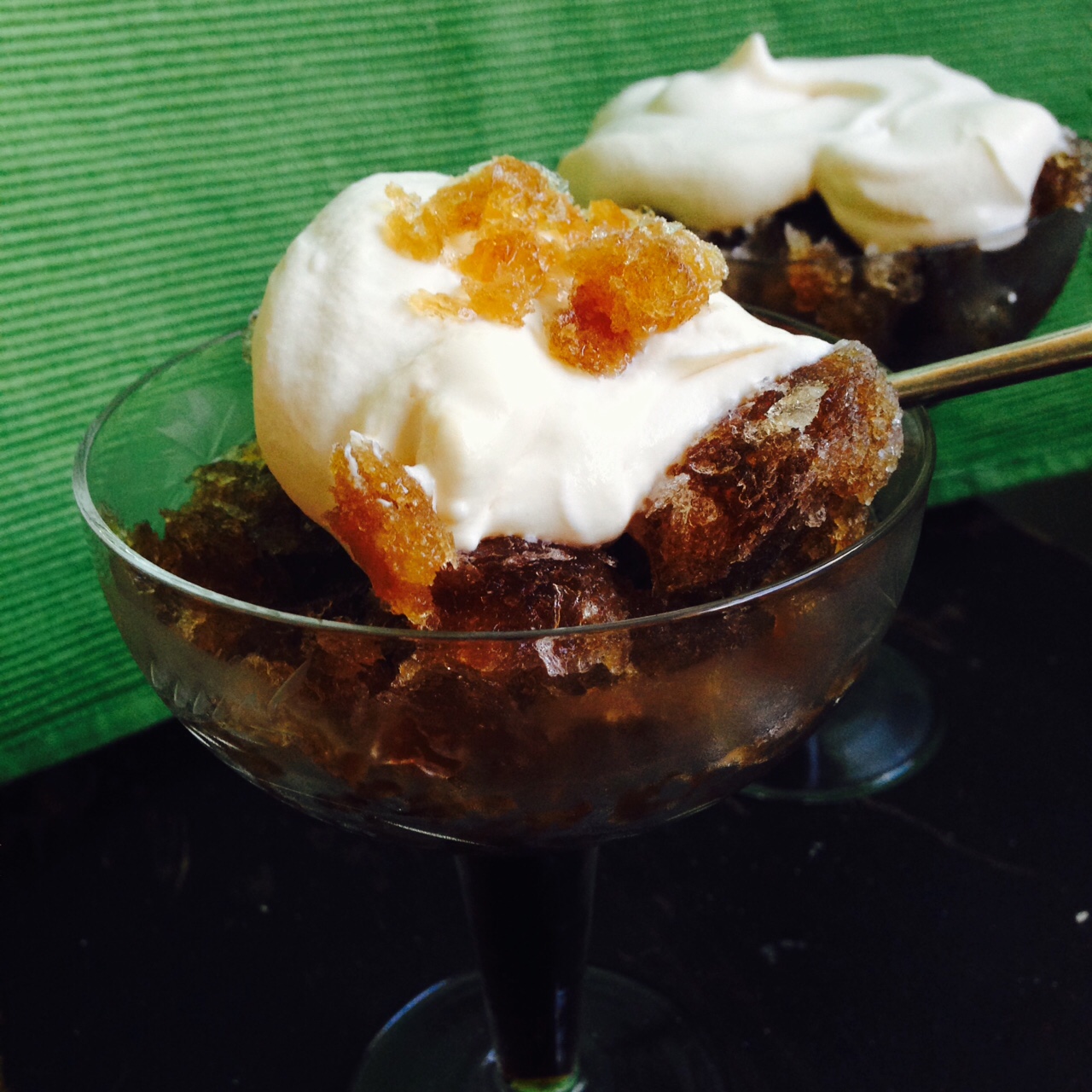 So it has come as a bit of a surprise to find that I’m actually a little bit partial to Guinness. I’m probably more likely to find a four-leaf clover than drink a pint of it in one go, but it’s not a bad drop, all told. And it’s quite fun to play with as an ingredient, especially if you get the cans with the little ball in them that help you pour it just like they do at the pub. Here are three ways to get some of that Guinness goodness into you… 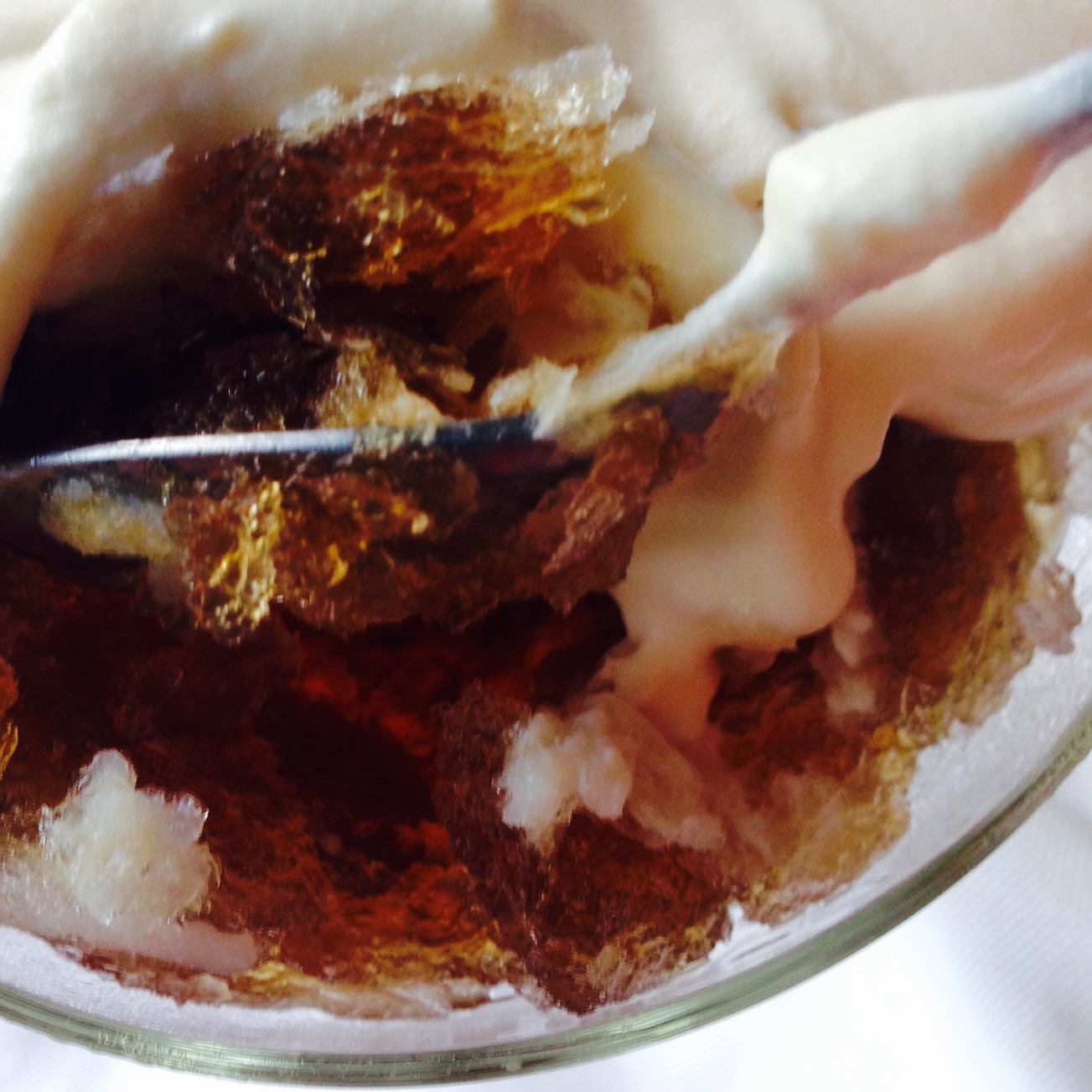 Guinness Granita with Irish Cream
This idea came to me like a vision while I was running up Mt Victoria in the half-dark one hot and sticky late summer morning. It’s every bit as refreshing as I hoped – and it makes one can of Guinness go a very long way. The granita will hold in the freezer for a couple of weeks and you should get at least six to eight servings out of it. The cream is best made just before serving – the amount specified below is enough for four.

Put the sugar and water in a bowl and stir well to dissolve the sugar. Slowly add the Guinness and stir well, then pour into a shallow freezer-safe container.
Put in the freezer and leave until partially frozen (about 1 to 1.5 hours), then scrape up the crystals with a fork and stir well. Return to the freezer for another 1.5-2 hours, then scrape up the mixture into large crystals. At this point you can serve the granita, or scrape into a covered container and leave in the freezer until you’re ready.
When you’re ready to serve, whip the cream with the Baileys or whiskey until soft peaks form.
Scrape about half a cup of the granita into a glass, then top with a large spoonful of the cream.
Serve immediately.

2. Black Velvets
This isn’t my invention but I’ve always loved the story associated with it. After the death of Prince Albert in 1861, a London bartender invented a drink that looked suitably sombre for those in mourning by mixing Guinness and champagne together. It takes a little bit of skill to get it right without the glasses overflowing, but it’s otherwise a very simple drink. Just half-fill a champagne flute with sparkling wine (not your best French champagne, unless you’re a member of the Guinness family or similar), then carefully, carefully, carefully, top up with chilled Guinness.

3. Guinness Affogato
If you don’t have time to make a Guinness granita, as detailed above, you can still have a Guinness-y pudding. Scoop some best-quality vanilla ice cream into a chilled glass, then pour over half a shot of espresso coffee and half the same quantity of Guinness. Top with some shards of very dark chocolate.

Have a great week, everyone. Slainte!

A dear friend of mine calls herself an alternative eater – wholefoods, no meat, no refined sugar, the whole kit and kaboodle. While that makes her a rather challenging dinner guest, she’s also one of the most appreciative people a cook could hope to create for. After I got over feeling daunted by her request for a birthday cake last weekend – especially one that could withstand a car journey and an afternoon in the sun – I had a burst of inspiration and these pretty-in-pink bliss balls were the result. 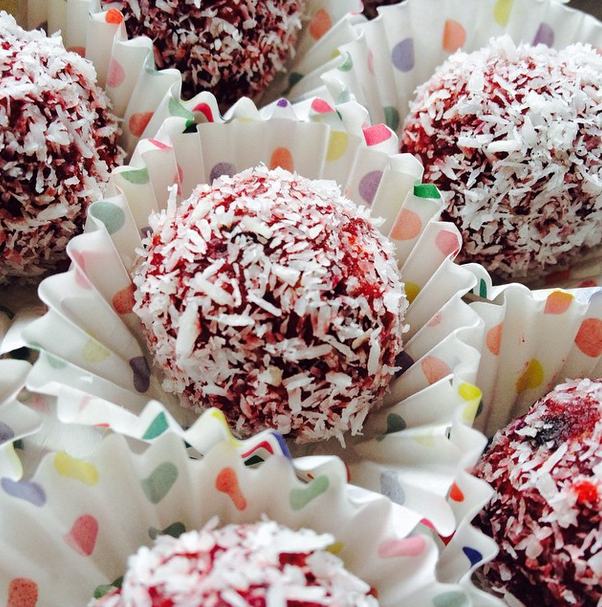 You don’t have to be an alternative eater to love these. In fact, you don’t even have to like beetroot. Soaking the almonds makes them easier to whizz up.

1/2 cup desiccated coconut, plus about 3/4 cup for rolling

Put the dates and almonds in a small heatproof bowl and cover with boiling water. Set aside for 15 minutes, then drain.

Tip the beetroot into a food processor and whiz until finely chopped. Add the drained dates and almonds, the chocolate (if using) and the 1/2 cup measure of coconut. Whizz until it clumps together.

Put the second measure of coconut into a shallow bowl. Form teaspoonfuls of the mixture into balls, then roll in the coconut. Store in the fridge. Makes around 36 small balls.

Delusion is a wonderful thing. It’s why dress shops have flattering mirrors, why cosmetic counters have soft lighting and why a whole industry has sprung up around ‘healthy’ baking.

There are two ingredients required for ‘healthy’ baking – either fruit and vegetables (hello, carrot cake) or oats (to whit, the entire British flapjack industry). Now, few people will dispute the merits of vegetables or whole grains, but they’re not enough to mitigate the ingredients needed to turn them into cakes or biscuits. Far better, I think, to concentrate on the deliciousness imparted by a couple of juicy beetroots to a trayful of chocolate-studded cakes than angst about whether they’re good for you or not. 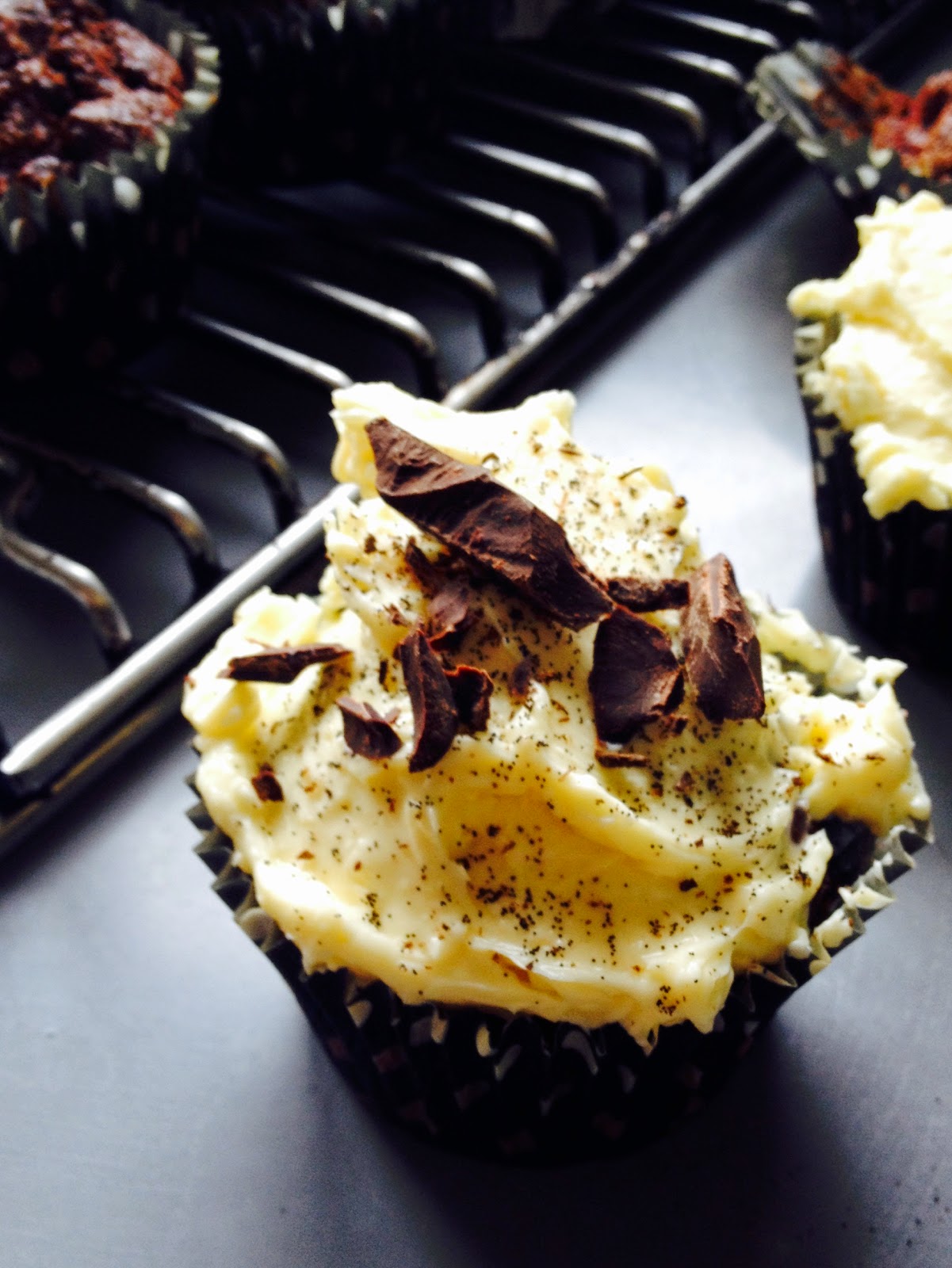 Double chocolate and beetroot cakes
This is a good school holiday activity for idle hands – especially if you can get them involved in the dishes afterwards. This recipe makes around 18 cakes, which keep well in an airtight tin and can be frozen very successfully for lunchboxes or unexpected visitors.

It’s also a fitting entry for October’s Tea Time Treats, a blogging event run by Karen of Lavender and Lovage and Jane of The Hedgecombers. This month, they’re looking for recipes containing fruit and vegetables. If you subscribe to the theory that chocolate is derived from a fruit, then this fits the bill on both counts.

Heat the oven to 160C (fanbake) and line 18-muffin pans with cupcake liners (not essential, but makes for easier cleaning up and no anxiety when it comes to getting them out of the tin).
Sift the flour, cocoa, spices and baking soda into a bowl. Stir in the coconut and chopped chocolate and set aside.
Beat the eggs, sugar, yoghurt and oil together until thick and pale. Fold in the dry ingredients, then the beetroot. Divide between the prepared tins – each one should be about two-thirds full – and bake for 20-25 minutes.
I like these just as they are, but they’re also very good with a simple cream cheese icing (beat together 1 cup soft cream cheese with 2 Tbsp honey and 1/2 tsp pure vanilla) and a scattering of chocolate. (That does make them less ‘healthy’ though!) 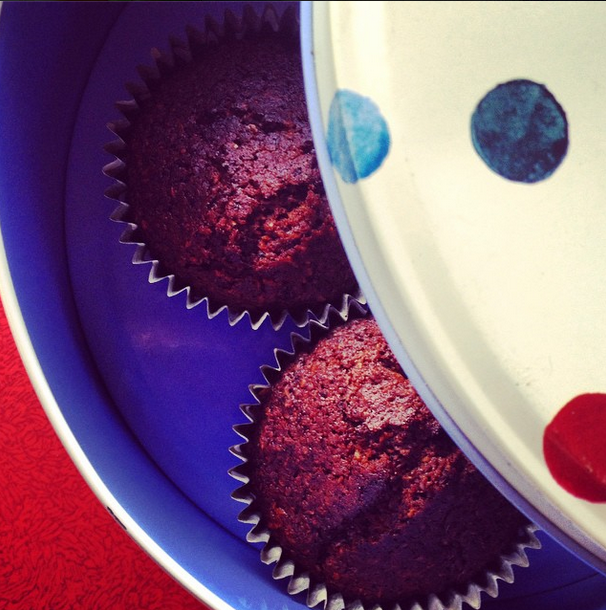 One of my favourite childhood memories is of picking mushrooms with my father. It’s funny, because I detested mushrooms, but I loved picking them. There was something special about it; something almost magical. Maybe I’d read too many fairy tales or maybe it was the novelty of doing something with Dad, but I loved those little jaunts. We’d collect as many mushrooms as we could – once we picked such a lot we took off our woolly hats and turned them into mushroom carriers too – before returning home across the farm with the spoils. As long as I didn’t have to eat them, I was blissfully happy. 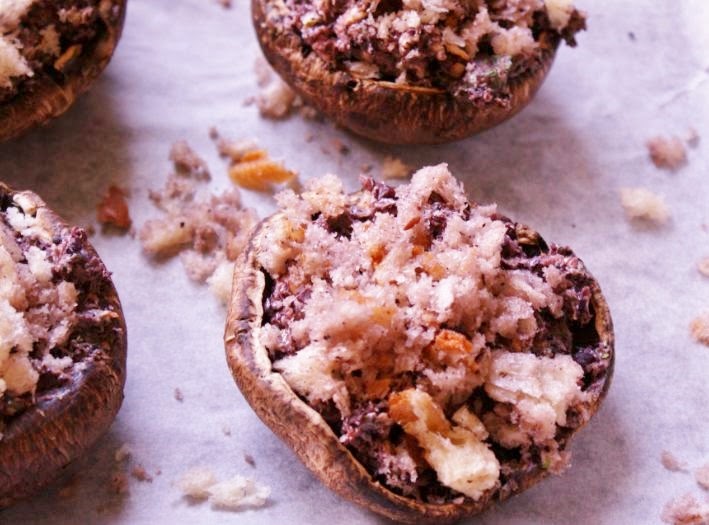 The Best Stuffed Mushrooms, Ever
The giant Portobello mushroom is the fillet steak of fungi. Slather one with this rich, olive and caper butter and you’ll convert the most ardent mushroom hater. Trust me, I used to be one. If you’re picking your own mushrooms, remember to leave the toadstools or the fairies will have nowhere to hold their meetings.

Heat the oven to 210C. Line an oven tray with baking paper and put the mushrooms on top, flat side down.
Put the olives, butter, garlic, capers, chilli flakes and lemon zest in a food processor and whiz until it forms a smooth mixture. If you don’t have a processor you can use a stick blender or a mortar and pestle. If you don‘t have any of these things, just chop the olives and garlic finely, then mash everything together with a fork.
Divide this mixture between the mushrooms. Put the stale bread in the processor or blender (no need to wash it first) and whiz to form crumbs. Scatter these over the mushrooms.
Put the mushrooms in the oven and bake for 15-20 minutes, until the breadcrumbs are golden. Scatter the finely chopped parsley over the top, then serve with a crunchy green salad and some good bread. Serves four.