Goodness knows the world could use a few laughs right now, but this recipe is no joke. It’s what you make when you suddenly realise you have people coming for dinner and you need to whip up some sort of small, elegant pudding that will round out the night nicely. These almost-instant fools are the answer.

Having spent a somewhat gin-soaked summer – I got three bottles of the good stuff for Christmas (one of them was a miniature, before you plan an intervention) – I’ve been enjoying finding different ways to use them. Mostly we’ve drunk them neat or with a little ice, especially the Little Biddy West Coast Botanical Gin from Reefton Distilling Co and Bloody Shiraz Gin from Four Pillars Gin in the Yarra Valley. The latter is also really good to sip while you’re nibbling squares of very dark chocolate (sensitive souls will need to brace themselves for the resulting headache the next morning).

These little fools, however, I made with the contents of the miniature – Malfy Lemon Gin from Italy. You could use any gin, really, but once you’ve tasted the craft variety the standard gins seem a little rough around the edges. If you’ve got lemon curd stashed away (here’s a super-easy recipe), this takes minutes to make.

Put all the ingredients in a bowl and stir until combined. Divide between four small glasses. Chill for at least 20 minutes before serving with little crisp biscuits (this shortbread would be excellent). Cheers!

In Summer Cooking, Elizabeth David says that ‘cold stewed plums must be one of the dullest dishes on earth. Accompanied by custard it is one of the most depressing’.

I don’t mind a cold stewed plum myself (and cold proper custard is heavenly). What I find depressing is biting into a purple-skinned plum and discovering that its flesh is golden and mushy. In my opinion, a good plum – stewed or not – is a confounding blend of sweet and sour, with firm, juicy flesh in shades of pale pink, bright crimson or cardinal red.

If you’re a plum-lover – or have a tree and can’t keep up with eating them – here’s a salad we’ve been enjoying a lot in the last couple of weeks.

This is the sort of thing you can throw together very easily and people think you’re some kind of salad savant. You can add and subtract ingredients as suits your palate and pantry: some soft cheese might be good, or olives, or even some cooked quinoa (yes, really, though you might want to add a bit more dressing).

1/2 cup pumpkin seeds, toasted in a dry pan until golden

1 clove garlic, crushed to a paste with a pinch of flaky sea salt

Put the onions, salt, sugar and red wine vinegar in a small bowl. Stir to combine, then cover and set aside for at least 15 minutes (longer is fine, though put in the fridge if it’s going to be more than an hour).

When the onions have steeped and you’re nearly ready to eat, put the spinach leaves and plums in a salad bowl. Drain the vinegar from the onions into a small jar. Add the crushed garlic and pomegranate molasses. Shake to mix, then add the olive oil. Shake again until emulsified.

Add the onions to the bowl and drizzle over 3-4 tablespoons of the dressing. Toss gently, then scatter over the pumpkin seeds. Toss again and serve. Serves 3-4.

Fancy more plum recipes? You could try this roasted black doris plum and coconut ice cream, these mulled plums or this blast from the past – a Black Forest plum sandwich!

One of the most endearing scenes in the movie Big (where Tom Hanks plays a little boy magicked into a man’s body) is when he picks up an ear of baby corn and eats it, typewriter-style, at a fancy event. Of course, baby corn usually tastes of nothing but tin, but at least you don’t have the problem of what to do with the cobs afterwards.

If you’re getting through a heap of sweetcorn this summier, let me introduce you to an excellent kitchen hack: you can turn those nibbled cobs into the sweetest, most flavoursome stock ever. It doesn’t make them fit into your worm farm any easier, but at least you’re extracting maximum value first.

Gather as many cobs as you have – ideally 4-6 – and put them in a large pot with half an onion, a well-washed carrot and a stick of celery. Cover with cold water. Cover the pot and set over medium heat. Let it come to the boil, then simmer gently for 40 minutes. Cool and strain into suitable containers with lids. Refrigerate and use within five days, or freeze for up to three months. And if you’re wondering what to do with sweetcorn stock, the following recipe should do the trick nicely.

Save this for a rainy day (there’s bound to be one along soon!)

Melt the butter in a large saucepan set over medium heat. Add the onion and cook for 5 minutes, stirring occasionally, until it is beginning to soften. Add the salt, turmeric and chipotle. Add the corn kernels and kumara. Stir well, then add the stock. Bring to a gentle simmer, then cover and cook for 10-15 minutes, until the kumara is soft.

Remove from the heat and puree, either using a stick blender, a food mill or a food processor. Return to the saucepan and taste for seasoning – add more salt if needed. If the soup seems very thick, add a little boiling water. Stir through the creme fraiche and reheat gently. Serve hot, garnished with a little extra creme fraiche and a drizzle of chipotle sauce.

In recent weeks I’ve developed a somewhat shameful addiction to vacuum-packed gnocchi. You know the stuff I mean – little huhu grubs of potato and god-only-knows-what-else stuffed into flat packets that stack so easily in the cupboard. This gnocchi, which bares only a passing resemblance to the real deal, is the Italian cousin to the mighty two-minute noodle. It’s fast, convenient and – despite negligible nutritional value – can be just what you need in times of trouble.

The trick, of course, is knowing how to pimp them up. Here’s what I did the other night, cleverly combining the contents of the fridge with a packet of gnocchi for a dinner that practically cooked itself and cheered us all up. 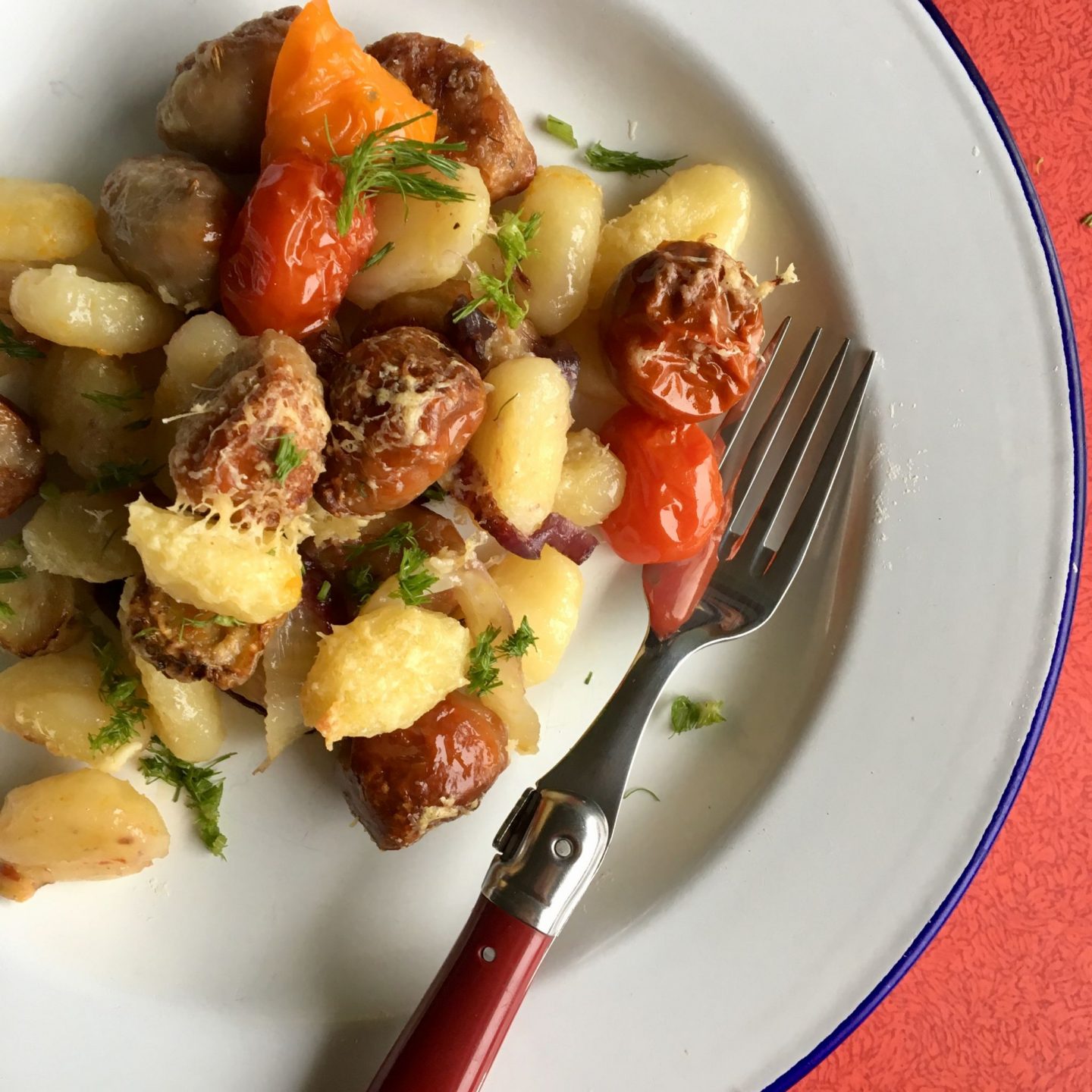 Feel free to add any suitable vegetables here – eggplant or zucchini would be excellent when they’re in season. Tucking extra cheese in (feta or halloumi, perhaps?) is a good idea if you’re not fond of sausage.

A handful of finely chopped parsley

Heat the oven to 200C. Set a large pot of water to boil over high heat.

Pour a splash (about 1 1/2 Tablespoons) of olive oil in a heavy roasting dish. Add the onions, fennel, peppers and sausage chunks. Toss together, season well with salt and pepper and bake in the oven for 10 minutes.

When the water is boiling, add a handful of salt and the gnocchi. Cook for two minutes (the gnocchi should float to the top), then drain immediately. Tip the gnocchi into the roasting dish of vegetables and sausage. Add the cherry tomatoes and stir together. Drizzle with more olive oil and scatter over the grated cheese. Return the dish to the oven and bake for a further 10-15 minutes, until the sausages are cooked, the cheese is crispy and everything smells delicious. Sprinkle with the chopped parsley and serve immediately with a green salad on the side. Serves 3-4.