Cupcakes – so 2007, right? Depends who you ask. Personally, I’ve made about 50 in the last month, so I think they’re quite 2015 too. They’re brilliant if you’re doing any kind of baking for charity because they’re so easy to portion and transport. And children, who are less affected by trends, love them.

Cupcakes are also the flavour of the month for June’s We Should Cocoa and Tea Time Treats blogging events, so perhaps they’re not quite out of fashion yet. 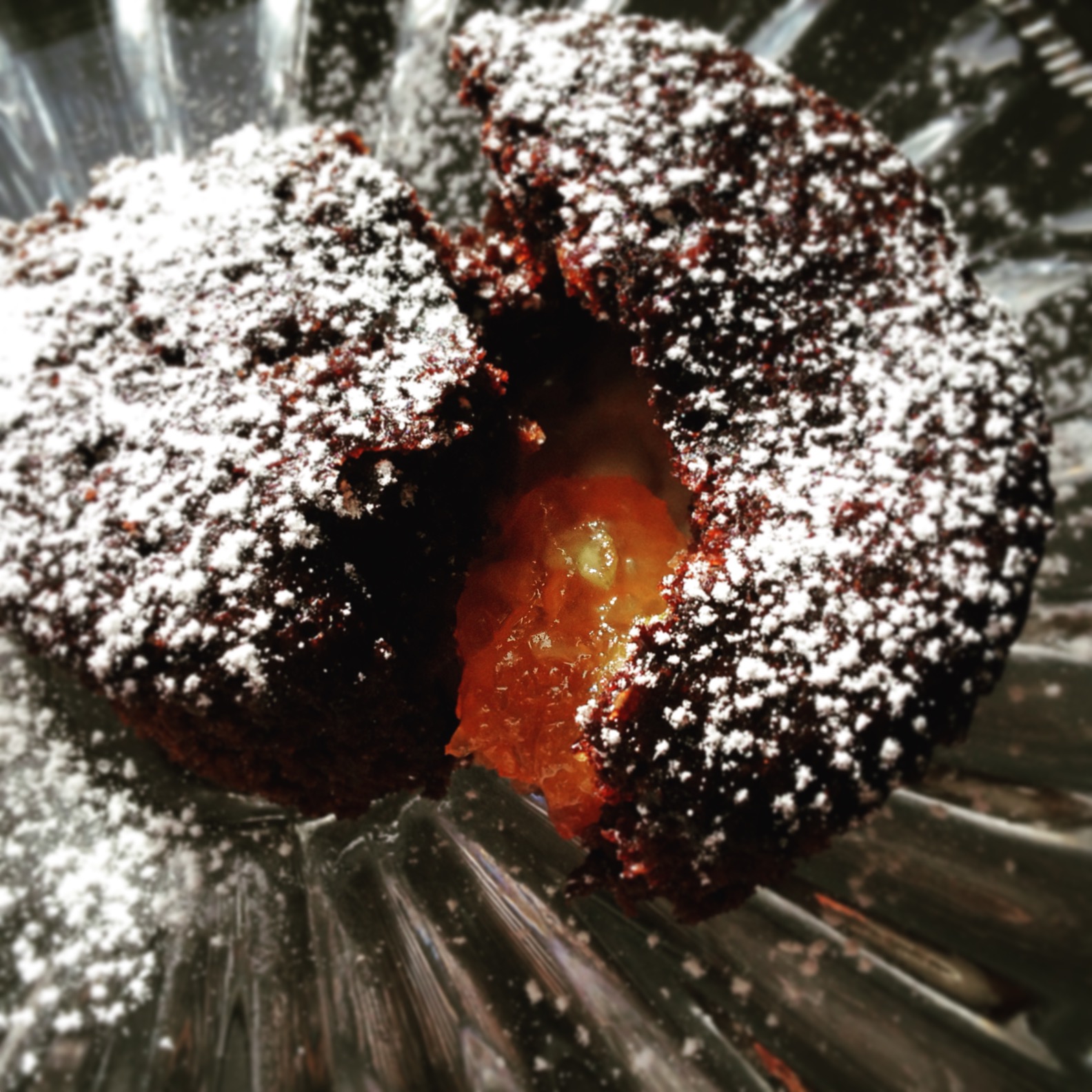 Secret citrus and cream cupcakes
This is my go-to, all-time, never-fail chocolate cake recipe, upcycled with a touch of cream cheese and marmalade to make chocolate cupcakes with a secret gooey middle. Imagine something like a dark sticky chocolate cake wrapped around a citrus cheesecake filling and you’ve got the idea.

Preheat the oven to 180C and put cupcake cases in 18 muffin tin holes.

Sift the dry ingredients into a large bowl and mix well. Add the butter, milk and eggs and beat furiously with a wooden spoon until well mixed (you can also do this in the processor or in a mixer).
Fill each cupcake case until it is about a third full, then put a teaspoon of cream cheese and a teaspoon of marmalade on top. Top with more cupcake batter, until each case is about two-thirds full. Bake for 15-20 minutes, until the cakes are springy and a skewer plunged into them comes out clean.
Remove to a rack to cool. Store in an airtight container.

When I rule the world, I’m going to introduce a law banning vanilla-flavoured perfumes and all forms of fake vanilla extract.

Real vanilla has such a beautiful, delicate scent, but it’s been ruined by the synthetic variants wafting through a home near you.

Vanilla soap, vanilla perfume, vanilla moisturiser, vanilla candles, they’ll all be banned. Fake vanilla extracts will be outlawed, too. Instead, we’ll feast on real vanilla-scented cakes, like this tropical number. 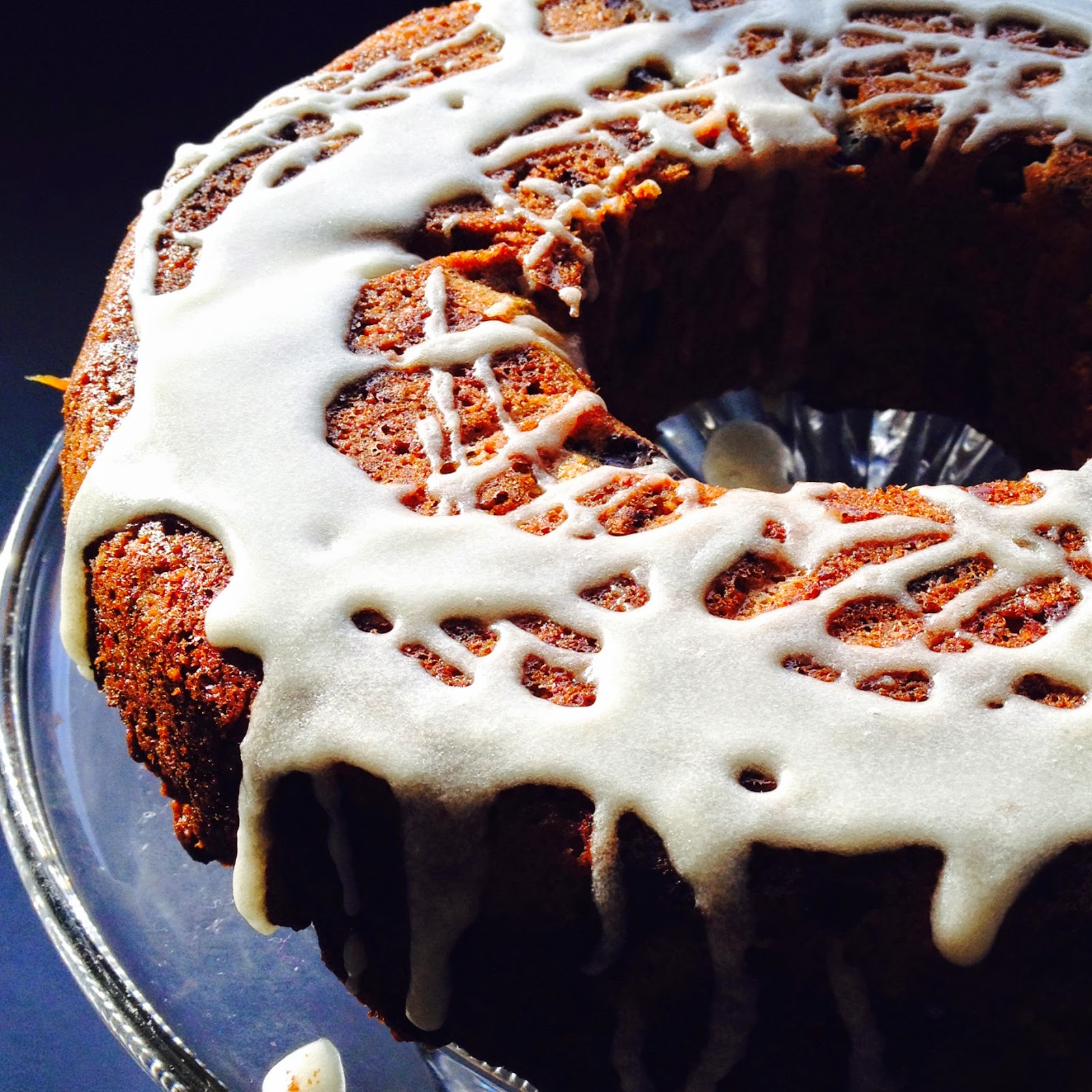 This has a triple dose of vanilla, but it’s not overpowering. Just make sure you use the real deal. The combination of chocolate and vanilla – a powerful duo – makes this just right for this month’s We Should Cocoa, hosted by the ever-lovely Karen of Lavender and Lovage.

Cream the butter and sugar together until very light and fluffy. Add the eggs, one at a time, beating furiously. If it looks in danger of curdling, add a little of the desiccated coconut. When the eggs are all in, add the coconut and vanilla. Beat to combine, then fold in the sifted flour, baking powder and salt. Fold in the chocolate. Scrape into the prepared tin and bake for 30 mins, until a skewer comes out cleanly. Leave in the tin for five minutes, then stab with a skewer (very satisfying!) and pour over the syrup (just stir together the boiling water, sugar and vanilla to make it).

When the cake has cooled, carefully remove from the tin and set on a plate.

Make the icing by beating together all the ingredients – you may need more boiling water to make it the right consistency – and drizzle it over the cake.

This is the inverse of Three Ways With – instead of being three ways with one ingredient, it’s one way with three. Confused? Don’t be. This photo explains everything. 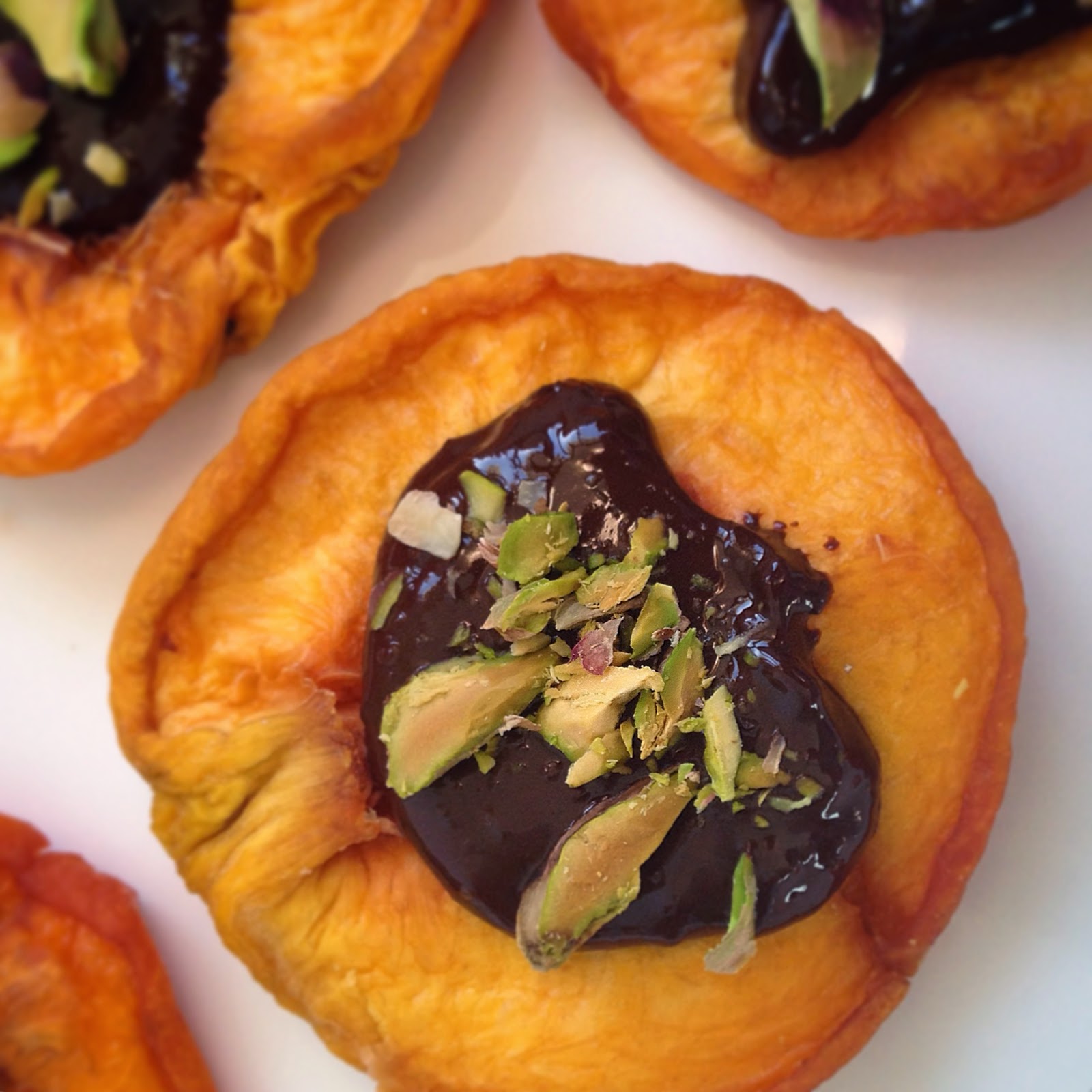 Peaches with pistachio and chocolate
This is such a simple idea I’m reluctant to call it a recipe. But it’s worth sharing – not least because the the April edition of We Should Cocoa is all about no-bake things to do with chocolate. If you’ve got these ingredients close at hand, this is a five-minute job.

Lay the peach halves on a tray, cut side up.
Melt the chocolate – in a bowl over simmering water, or in a low oven – and spoon a little on top of each peach. Sprinkle each one with chopped pistachios and leave to set (about five minutes).
Serve immediately or store in an airtight tin.

My mother used to say that the definition of willpower was eating one salted peanut. She was wrong.

At least, she was right, but I’ve got an update. The definition of willpower is having a bag of salted peanuts in your house that you ARE NOT OPENING until you have tried them in a recipe you dreamed up during a particularly dull conference call.

Then, the definition of willpower is eating just one piece of the results. Reader, my willpower is lacking. Try these and let me know how you get on… 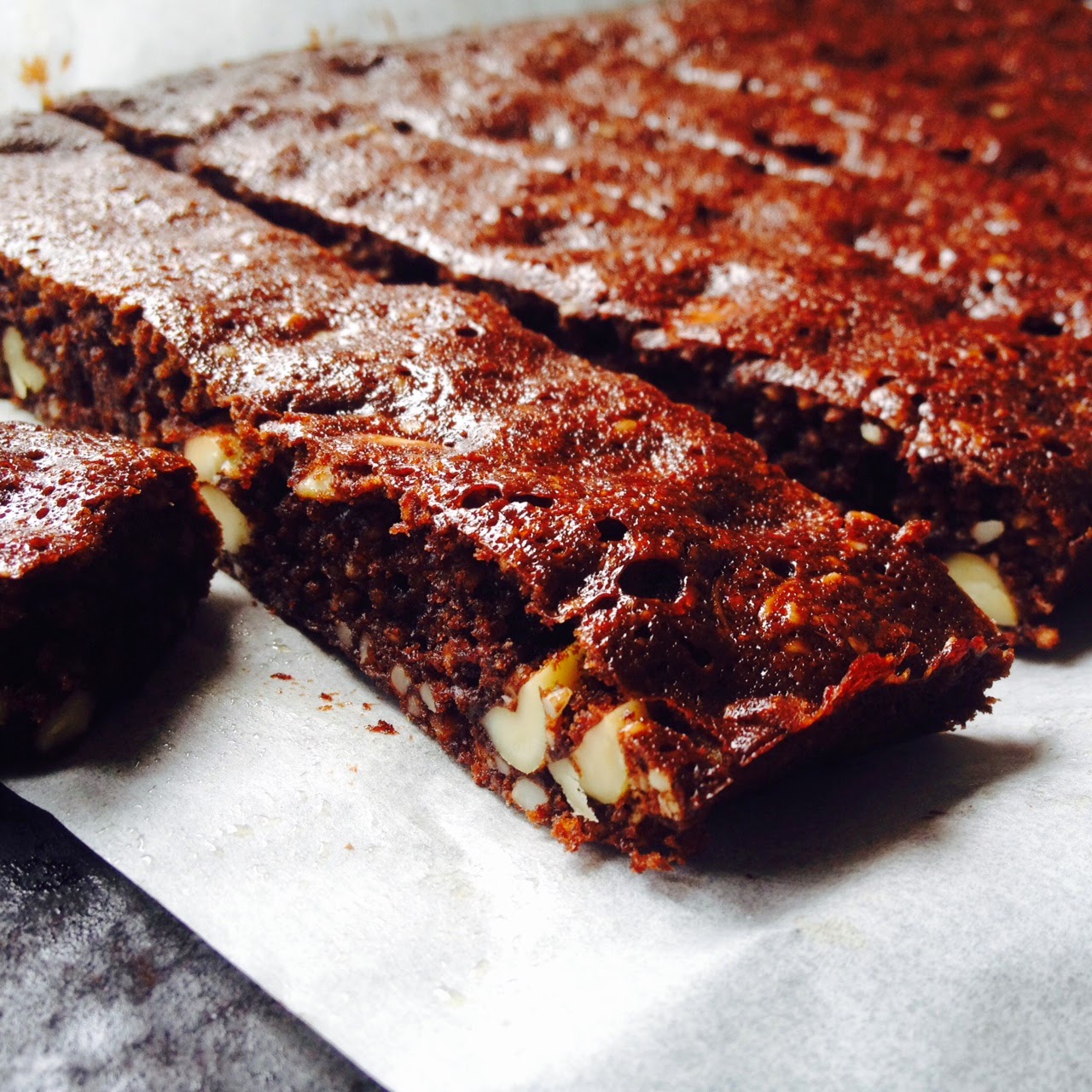 Double Peanut Brownies
In New Zealand, a peanut brownie is a crunchy cookie with peanuts inside it. Nice enough, but nothing to get excited about. By contrast, these are proper brownies, which is to say they are soft, slightly cakey and very moreish. They use two sorts of peanuts – ordinary blanched ones (which I can report are nowhere near as addictive as their roasted, salted cousins) – and the lovely, naughty salted ones. If you don’t have the wherewithal to grind the peanuts, use ground almonds.

Heat the oven to 180C and line a small brownie tin (measuring about 25 x 20 or similar) with baking paper.
Grind the peanuts to a fine meal in a food processor – stop before they start turning into peanut butter!
Melt the butter over gentle heat, then add the sugar and cocoa. Stir over the heat for a minute, then remove and let cool for five minutes.
Add the eggs and beat well, then add the ground peanuts, salt and baking soda. Stir to mix, then tip in the roasted peanuts.
Pour the mixture into the prepared pan and bake for 20 minutes – it should be slightly wobbly in the middle. Let cool in the tin, then slice into bars. Store in an airtight container in a cool, dark place (hide them, they won’t last long!). 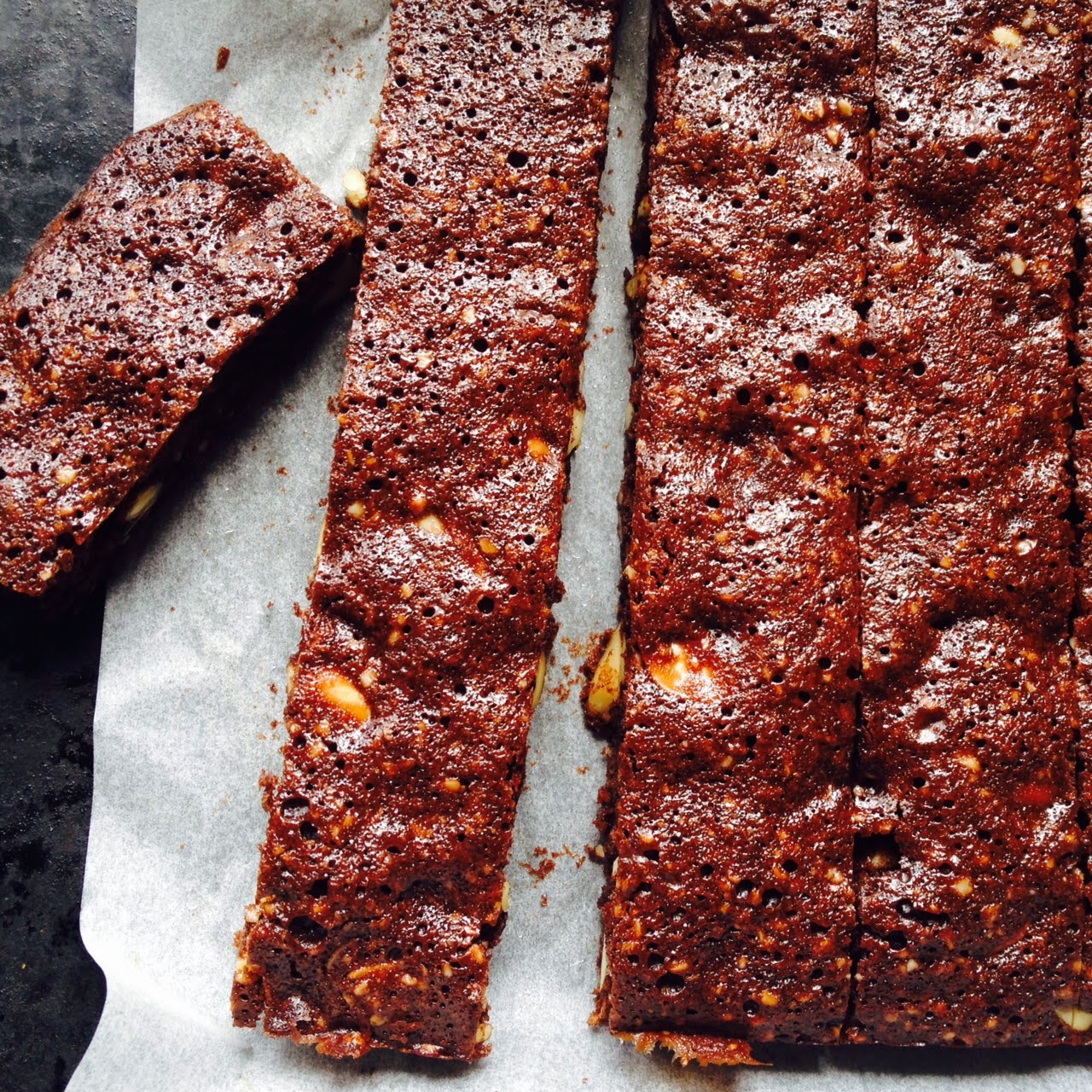 After a bit of an absence, I’m joining in with my favourite blog challenge, We Should Cocoa. This month it’s co-hosted by Katie at Recipe For Perfection – and the theme (you guessed it), is brownies..

It’s about this time of year that I start to feel slightly panicked and wish I could run away to some kind of closed community where they don’t celebrate Christmas, or have jobs, or blogs or Things To Worry About. Do you feel like that too?

The internet is the worst place to be if you’re in that kind of mood, because CHRISTMAS is around every turn. Don’t, whatever you do, venture on to Pinterest, or you’ll fall into a deep depression at the realisation that you’ve failed dismally as a mother/partner/sibling/friend/member of society because you haven’t planned your themed decorations, hand-stitched jaunty bunting or made 20 sets of Frozen-themed figurines of every kid in your child’s class from air-dried clay. And you’ve still got to bake for the school gala, sort your invoices, locate the spare car key and send your dear friend her birthday present, now three months overdue (sorry Claire!).

Fear not, friends, because I have a remedy to lift you to a higher place. It’s chocolate chilli syrup – and if pouring it over cake or ice cream doesn’t cheer you up, then adding it to a martini certainly will. Here’s how. 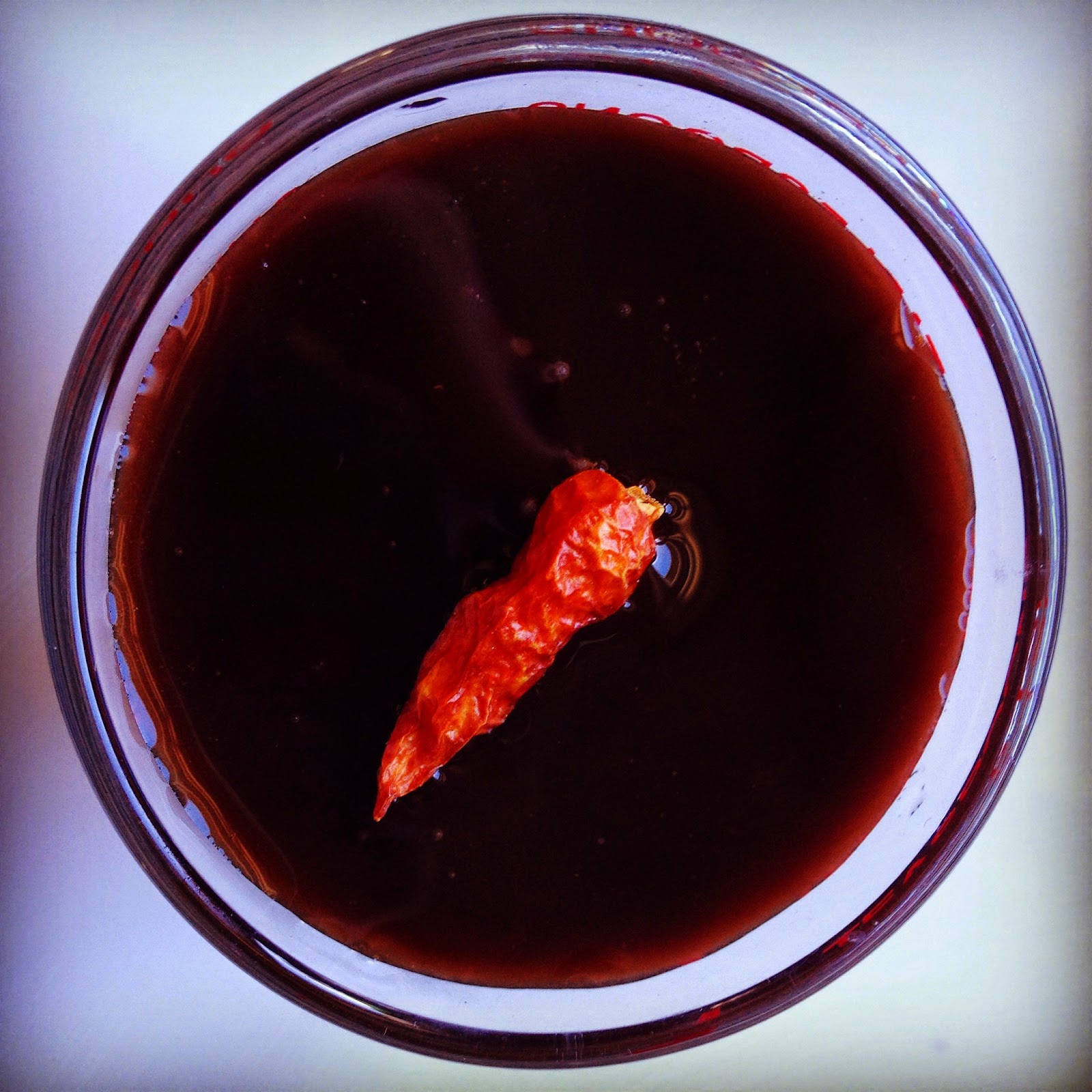 If you’re stuck for easy DIY Christmas gifts, this should go on the list. It takes minutes, doesn’t cost much and is extremely simple. It’s my offering for this month’s We Should Cocoa challenge, hosted by the lovely Shaheen of Allotment2Kitchen. No surprises in guessing this month’s guest ingredient – it’s chilli.

Stir the sugar and cocoa together in a small pot, then add the water and mix well. Bring to the boil and let simmer for five minutes, then remove from heat. Stir in the chilli and let cool to room temperature. Strain through a fine sieve into a jar or bottle and cover tightly. Store in the fridge. 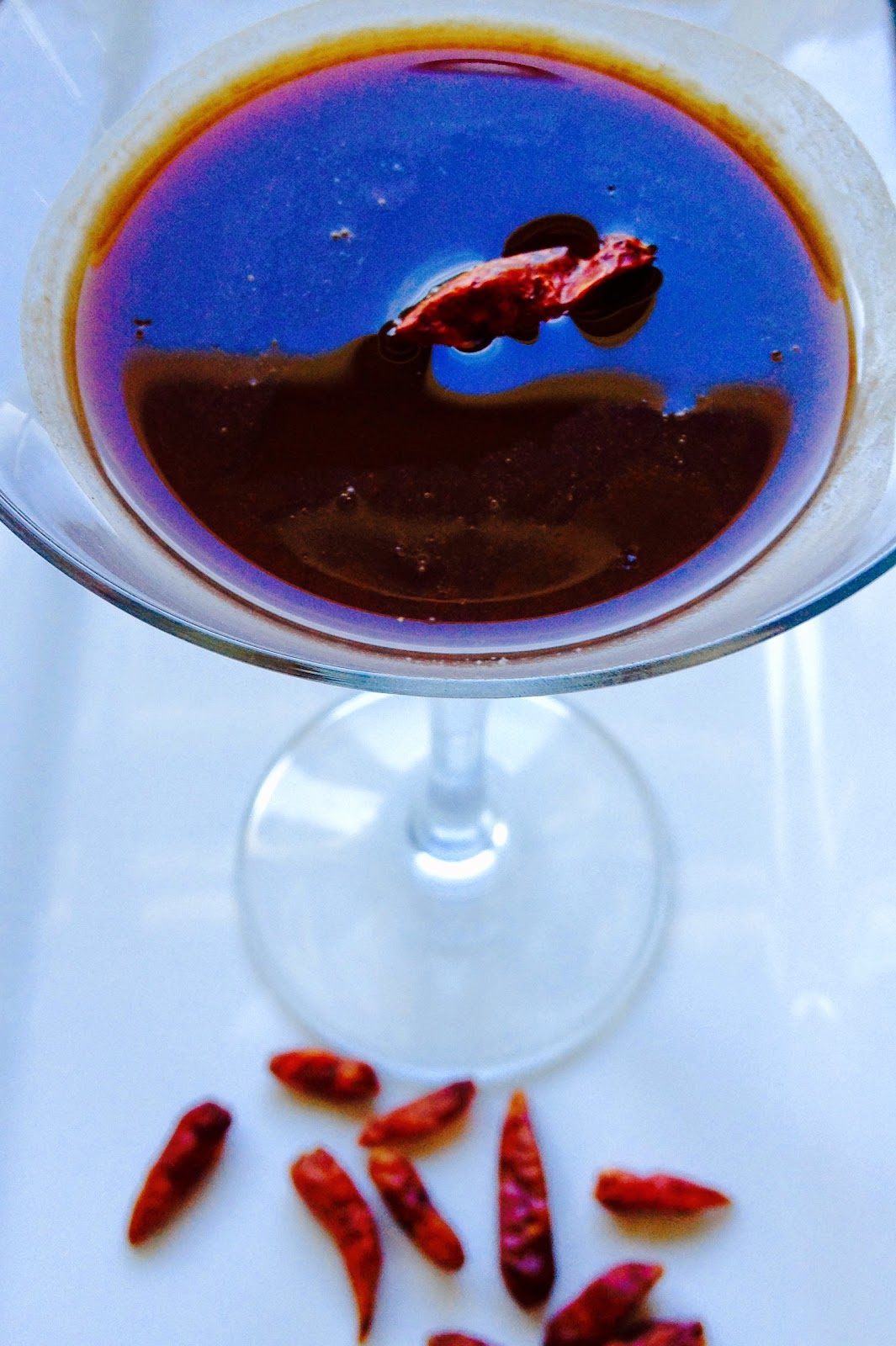 Martini purists, look away now – this is very much my desperate housewife interpretation.

Put all ingredients in a cocktail shaker (confession: I use a jam jar) and shake well. Strain into a martini glass (or two, if you’re generous).