This morning I’ve been for a run around the harbour and a quick dip in Oriental Bay on the way home. Spring has a bad reputation in Wellington (expressed best in this calendar), but today feels like one of those mythical ‘can’t beat it on a good day’ days that the city’s tourism campaigns are built on.

Spring, of course, means strawberries. Like living through a brutal Wellington spring day, growing good strawberries is mostly an exercise in hope triumphing over experience; some years are better than others. I’m stil optimistic that my homegrown crop will come good. If you’ve got a surfeit of strawberries from your own garden, try them in this exceedingly pretty and festive-looking salad (from the Spring section of Homecooked).

This is one of my favourite photos from Homecooked, not least because photographer Carolyn Robertson and I spent AGES trying to figure out all sorts of different ways to shoot it. Then we got over ourselves, I just threw the salad together and the photo more or less took itself (well, with Caro’s exceptional skills involved!)

Make the dressing ﬁrst: put all the ingredients in a blender or small food processor and whiz until smooth. Taste for seasoning and set aside.

Tumble the sliced strawberries, cucumber, radishes and crumbled feta into a serving bowl. Drizzle over the dressing and toss gently. Garnish with mint leaves and serve.

Have you got any strawberry growing tips? Do share!

Macaroni cheese is the ultimate comfort food, but I’m never in the right frame of mind to make it. This unconventional method is the answer – the pasta cooks in the milk, eliminating time and dirty pots. What’s not to love about that?

Once you’ve tried this method, you won’t look back. It’s best made with blue top or whole milk; but if you want to use trim, use 3 ½ cups of milk and omit the water. If you don’t drink cow’s milk, try this with goat milk. If you’re in Wellington, look out for Brooklyn Creamery goat milk, which comes from a farm up behind the wind turbine (I know, who knew?) It’s gorgeous milk, hyper-local and very fresh.

Set the grill to medium-high and grease an ovenproof gratin dish (about 20 cm x 30 cm).

Put the milk, water, bay leaf, pasta and nutmeg in a large pot and set over medium heat. Bring to a gentle simmer and cook, stirring frequently, for 10-15 minutes until the pasta is al dente. It will seem at the start that the sauce will never thicken, but keep stirring, I promise it will happen all of a sudden.

Remove from the heat and add the mustard, baby spinach and most of the grated cheese. Stir well to combine and tip into the prepared dish. Scatter the grated bread and the rest of the cheese over the top.

Put the dish under the grill and cook for 5-10 minutes, until golden and bubbling. Serve immediately. Serves 3-4.

If you’re an organised person, you’ve probably spent the last month pickling and bottling your summer harvest. (If reports of queues outside New Zealand supermarkets were anything to go by yesterday, then you probably spent yesterday panic-buying hand sanitiser and disinfectant.) Not me, on either count. As in most parts of my life, I’m the cricket who sang all summer and then realised they should have been storing stuff away for winter. I mean, you should see my Kiwisaver.

The good news is that you can have your fun – and your pickles – without all the hassle you might think is involved in such a task. Once you learn how to make fridge pickles, you’ll be every bit as smug as one of those people who does everything in advance.

How to make fridge pickles

To make a basic cold pickle brine, use a 1:1 ratio of water to vinegar, plus salt, sugar and flavourings (whole spices, garlic, chillies) to taste. Use your favourite kind of vinegar – I think white wine vinegar or apple cider vinegar are best. Here’s a sample pickling brew to give you an idea:

Put everything in a small pot set over medium heat. Stir well until the mixture is hot and the salt and sugar are dissolved. Add the spices/flavourings of your choice – about 1 tsp whole seeds to a cup of brine. Taste it to make sure you like the flavour – adjust the salt and sugar accordingly.
Pack whatever washed (and/or peeled) vegetables you want to pickle in a sterilised jar (cleanliness is even better than godliness when it comes to pickling – wash jars in hot soapy water, rinse well and heat in a 120C oven for 20 minutes. Soak lids in boiling water for 10 minutes, then dry thoroughly with a clean tea towel). I recommend the following, either separately or in a mixture:

Make sure the vegetables take up all the room in the jar – but leave about a 2cm gap at the top. Pour over the brine to cover the vegetables, making sure there are no air bubbles (tap the jar on the bench to pop them, or poke around with a skewer). Seal tightly and store in the fridge until you’re ready to eat. These pickles can be eaten after 48 hours – and you’re best to consume them within two months.

Thanks to Amber Sturtz (of Taco Addicts fame) for an excellent pickling tutorial at a recent Welly Hospo Wahine event.

Some people see the end of the financial year as a time to reflect upon their achievements and set their goals for the next six months. I’m not one of them.

It’s not that I’ve been sitting around doing nothing (so far this year I’ve made a book, written a lot of stories, held down a day job and managed to maintain most of my obligations to society), but it’s gone by so fast that I’ve barely had time to blink, let alone plan.

However, there is something I’ve been doing that I have every intention of continuing and that’s eating chocolate in large amounts (especially late at night while doing all the things listed previously). Reader, I have become seriously addicted to Whittaker’s Dark Salted Caramel Chocolate. Seriously addicted. I have to forcibly stop buying the stuff because once the packet is in my hand I come over all Augustus Gloop-ish and can think of nothing else but ripping open the golden packet and shovelling it in. This chocolate, which the Whittaker’s Oompa Loompas spent THREE YEARS perfecting, came out in May and I reckon we’ve probably averaged a bar a week ever since. I felt a bit ashamed of this statistic at first but now I’m owning it proudly. If you’re going to comfort-eat, you may as well do it with the good stuff, right?

In between eating it out of the packet I’ve been experimenting with using this chocolate in baking (beyond chopping it up and sprinkling it over French toast). This recipe is the result. 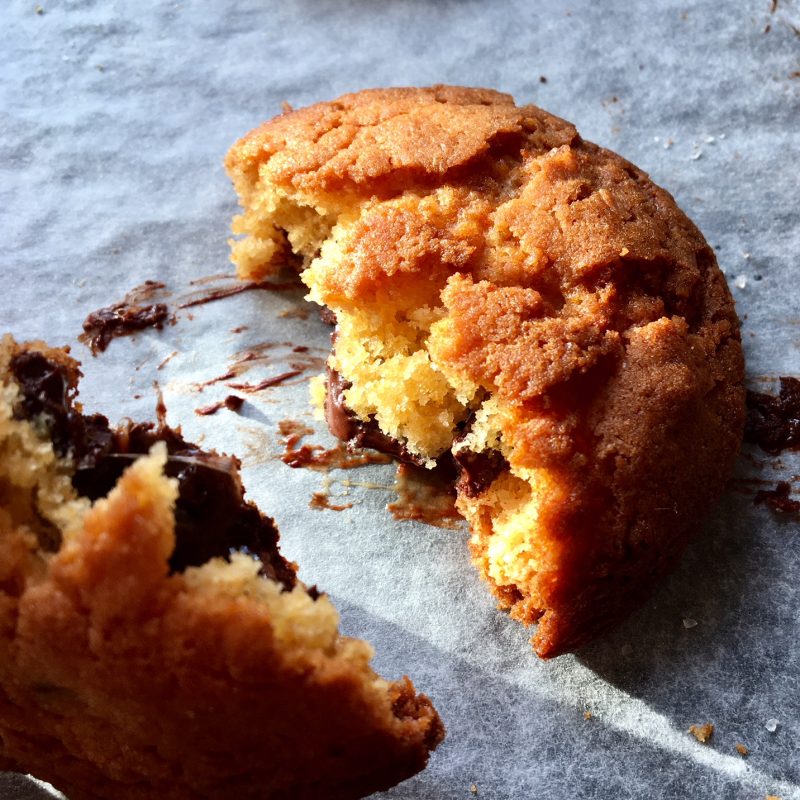 If you can’t get Whittaker’s (another reason to love living in New Zealand at the moment), try these with another caramel-filled chocolate. If you like cookies to be thinner and crisper, reduce the amount of flour a tiny bit (say, by a couple of tablespoons). They’re good either way!

Heat the oven to 180C and lightly grease or line two baking trays.

Cream the butter and sugars until very light and fluffy. Add the golden syrup and egg and beat again until well combined. Sift in the flour and stir to mix. Take generous tablespoons of the mixture and stick a square of chocolate in the middle of each one. Roll into a ball (to enclose the chocolate) and place on the prepared tray. Repeat until all the mixture is used up. Leave lots of space between them as they will spread while cooking. Press each ball lightly with a floured fork and sprinkle with flaky sea salt before putting the trays in the preheated oven.

Bake for 15 minutes, until golden. Cool on a rack and store in an airtight tin. 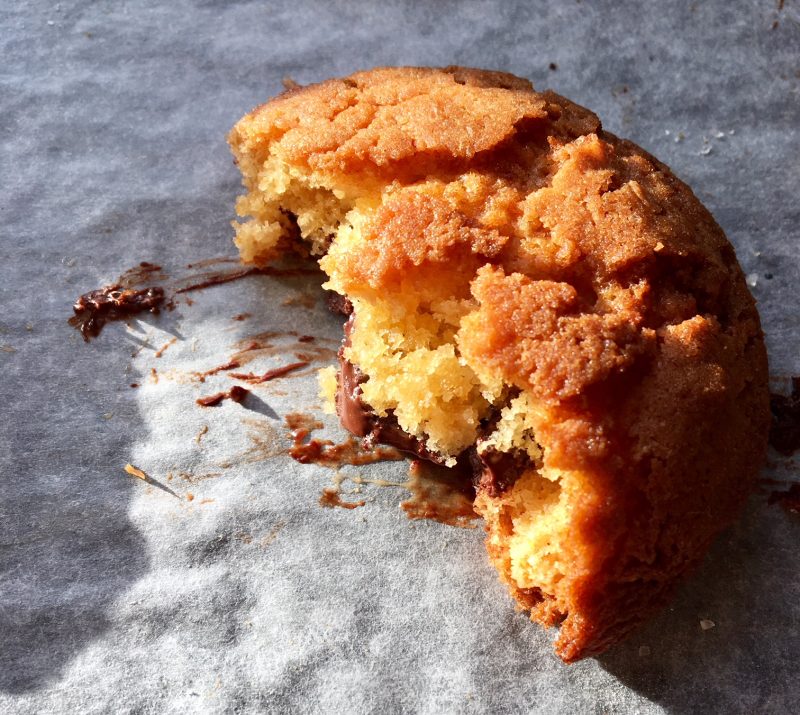