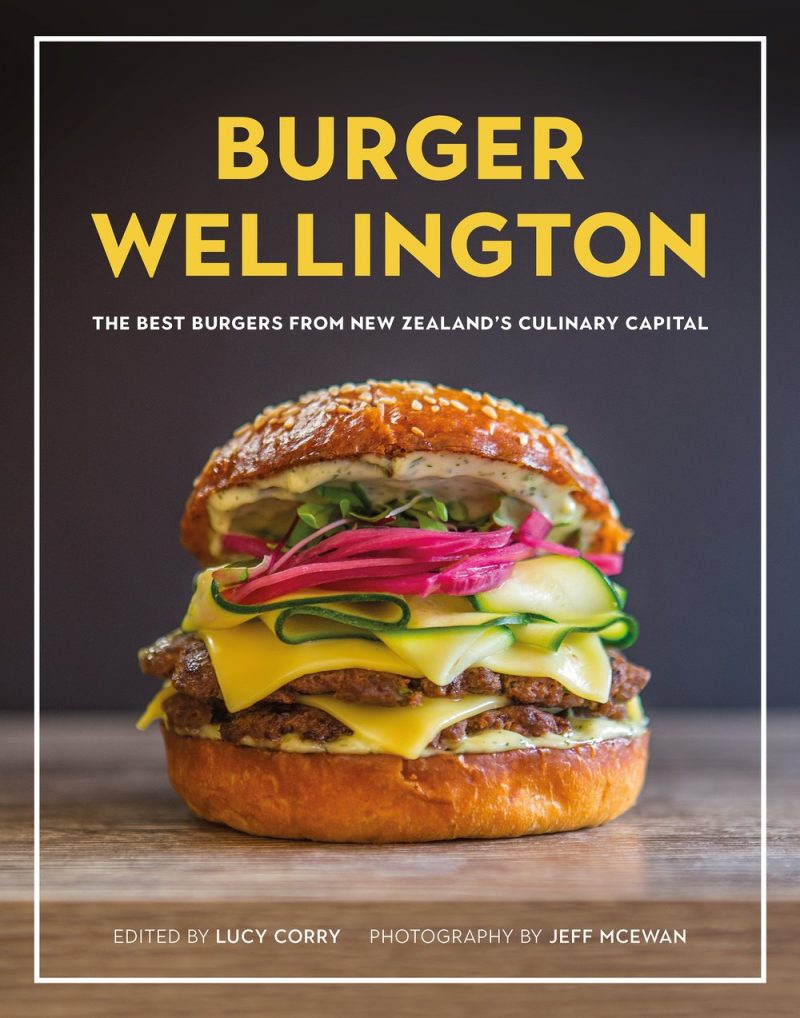 If you are lucky enough to live in a hot climate, or at least one where hot summers are guaranteed, you can’t begin to imagine how incredible it is to suddenly be blessed with blazing sunshine and balmy temperatures. After Wellington’s dismal effort last summer (grey skies, rain, wind, occasional flooding), which was so miserable I started seriously considering moving to Auckland or even Hamilton, everything has changed. It’s seriously hot (I’m writing this in a bikini, while eating an ice cream sundae) and I love it all over again. I don’t think I’m the only one. Just before Christmas I bumped into a former Wellingtonian who now lives in Sydney. He was laughing at how relaxed the city and its inhabitants were as a result of the better weather. “Everyone is so happy,” he said, “it’s like we’ve come somewhere completely different!”

There are downsides to this weather – there’s a water ban, so my garden is slowly dying (while my naughty neighbours keep their lawns lush with irrigation systems in a flagrant display of privilege), it’s been too hot to sleep at night and my sourdough making is taking a hit – but I’m not complaining. Instead, I’m off to the beach with a bottle of my icy-cold homemade ginger beer. Here’s how to make it (it will ferment and be ready in super-quick time if you’re similarly blessed with good weather). Happy holidays! 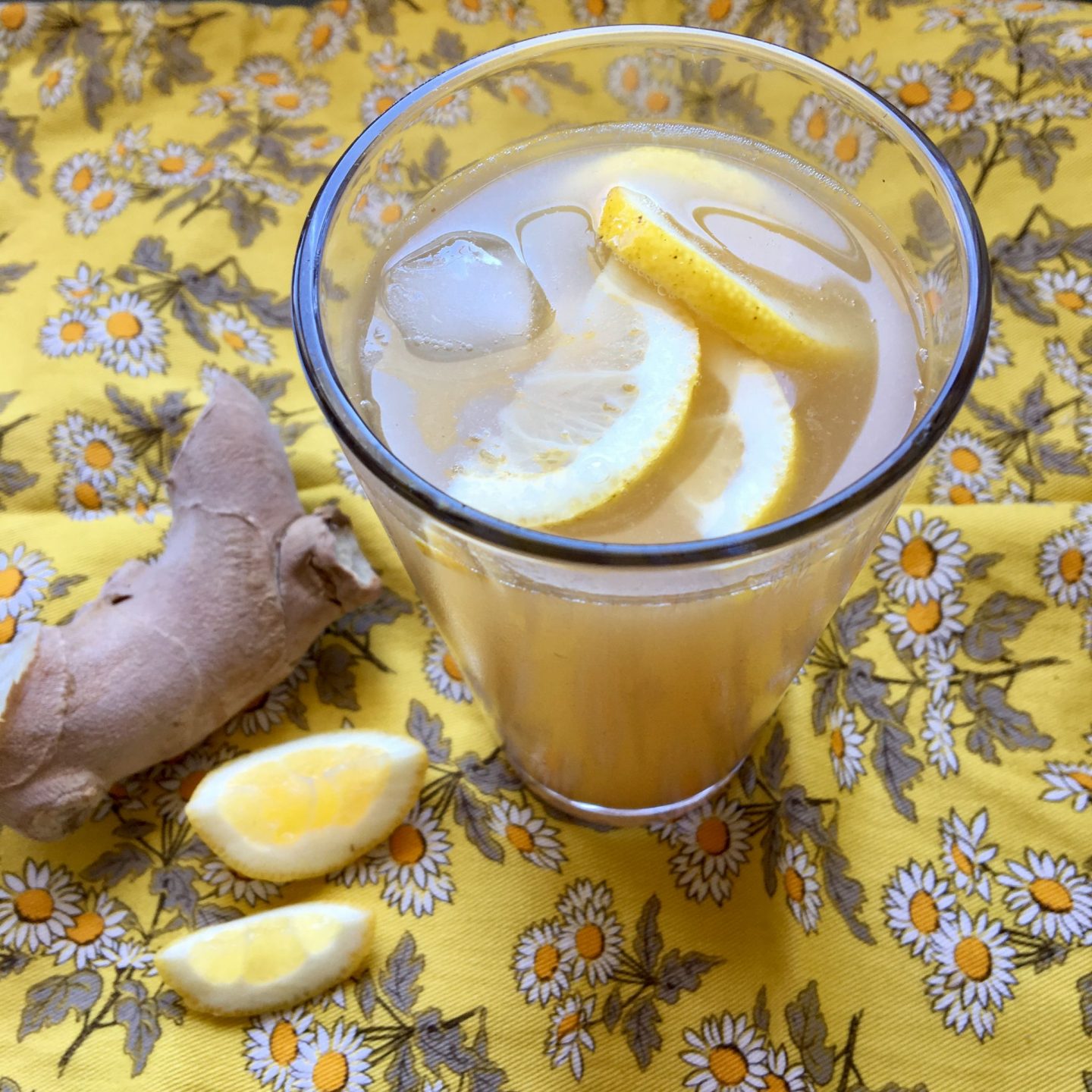 Make the syrup first by putting the caster sugar, fresh and ground ginger and lemon zest in a bowl. Stir in the boiling water and leave to steep for 10 minutes.

Put the yeast, ½ tsp sugar and warm water in a cup and set aside until it is bubbly.

Set a sieve over a funnel into a clean 1.5 litre plastic soft drink bottle. Pour in the syrup, followed by the lemon juice, pressing down to extract all the syrup from the grated zest and ginger. Fill the bottle with cold tap water until about 5cm from the top. Shake to mix, then add the yeast mixture. Cover tightly with the lid. Leave in a warm place (the kitchen will be warm enough in summer) until the bottle feels hard when you squeeze it. This will take about 24-36 hours. Chill in the fridge before opening.

Once you’ve got the ginger beer made, you can either drink it straight, add it to gin or vodka-based cocktails or use it in this classy shandy… 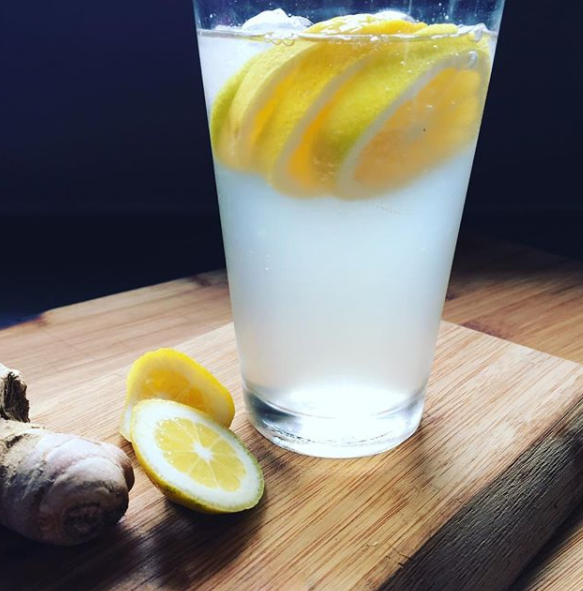 Ginger beer + crisp lager = instantly refreshing pick-me-up. If you’re too cool to be seen drinking a shandy, tell everyone it’s a panaché (that’s what you call a shandy in France).

Half-fill two tall glasses with ice. Half-fill each one with ginger beer, then top with an equal amount of lager. Stir to mix, garnish with lemon slices and serve immediately. Repeat as necessary with remaining lager and ginger beer. Santé!

Last week I wrote a ‘best of times, worst of times’ kind of essay on Christmas food (and much more besides) for Your Weekend magazine. I ran out of room to include this section, which looks back at last Christmas. How can it be a year ago? 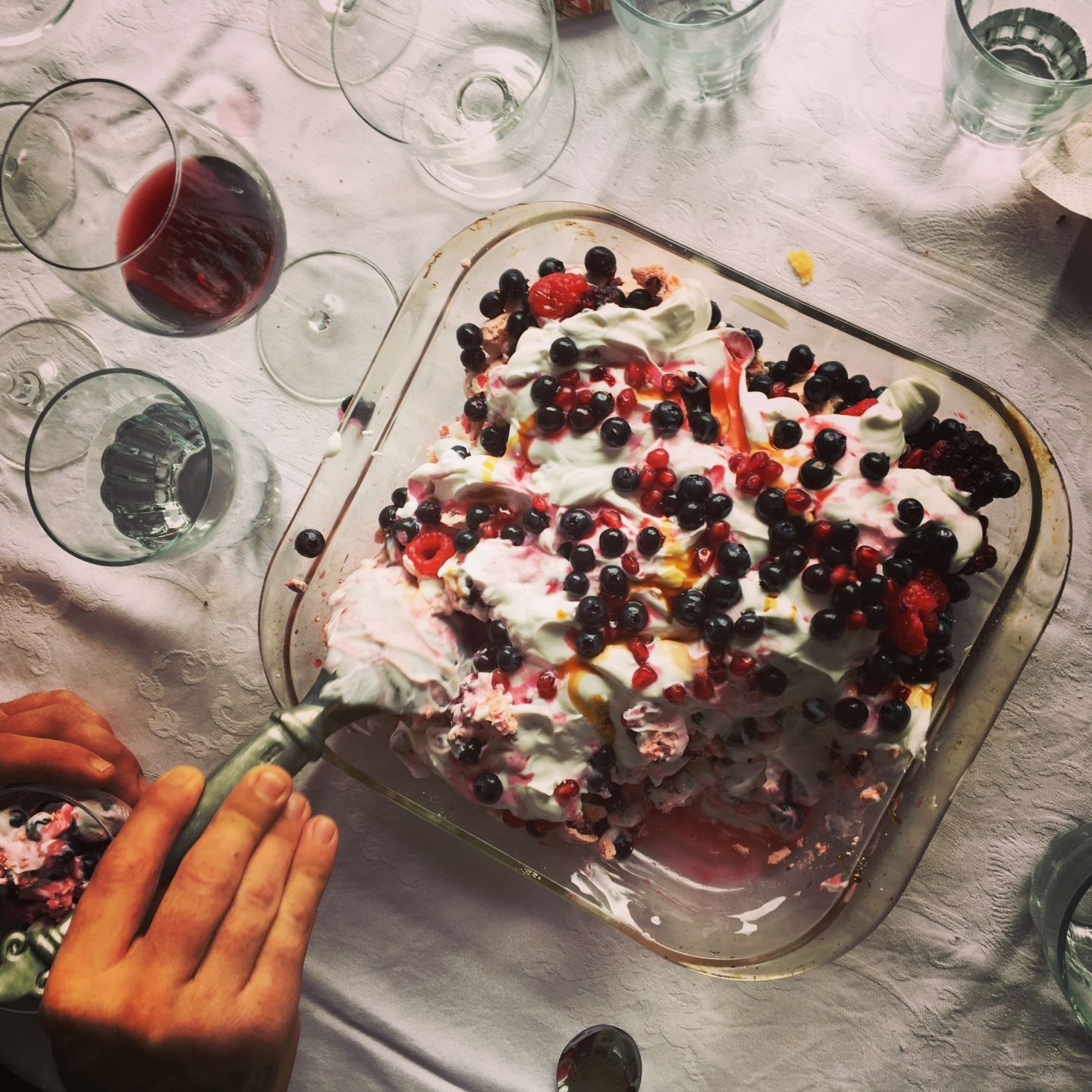 My brother stands in the kitchen, taking the cork out of a bottle of champagne. My sister puts on her glasses to read a recipe on her phone. My husband rinses grit off a pound of West Coast whitebait while my nephew patiently teaches my daughter how to play Old Maid. My brother-in-law explains a complex psychological theory to me while I wrangle two kilos of pork loin into a roasting dish. I have been looking forward to this for months – Christmas under my own roof, with visitors from far away. Not even the discovery that our ancient car was stolen overnight bothers me. I have taken the advice of the kind woman on the insurance helpline who told me at 8am that “there’s nothing we can do about it today, just enjoy Christmas”.

Weeks earlier, I had not felt so good. I had just started a new job and was more unsettled by the Kaikoura earthquake than I wanted to admit. I needed a distraction and the Christmas menu fitted the bill perfectly.  I send emails to my siblings; my brother responds with a link to a Fanny Craddock clip on YouTube. My sister directs me to a Nigella Lawson recipe. I show my husband a photo. “Excellent choice,” he says. “But we’re having a ham too, right? And whitebait?”

In the end we have all of these things, plus new potatoes dug out of the garden on Christmas Eve. My brother makes a kind of Eton Mess with coconut yoghurt, cranberry-studded meringues and swirls of pomegranate molasses. My daughter makes us pose for family portraits with the hideous robotic toys she has been sent for Christmas. We laugh so much the neighbours must think we are mad. We want for nothing.

Later that night I crawl into bed, thinking about the person who stole our car. They broke into our neighbour’s car too, stealing his five-year-old’s brand new bike. I don’t care so much about our car, but I hope the bike has made someone happy.

Wherever you are this Christmas, I hope you have a happy and safe one with people you love.

The scene: A suburban charity shop in Wellington, New Zealand. Two elderly women (let’s call them Beryl and Meryl) preside over the counter, keeping an eye on the shoppers on a cold Saturday morning. A much younger woman (let’s call her Lucy) approaches them, clutching a water-stained and battered paperback. 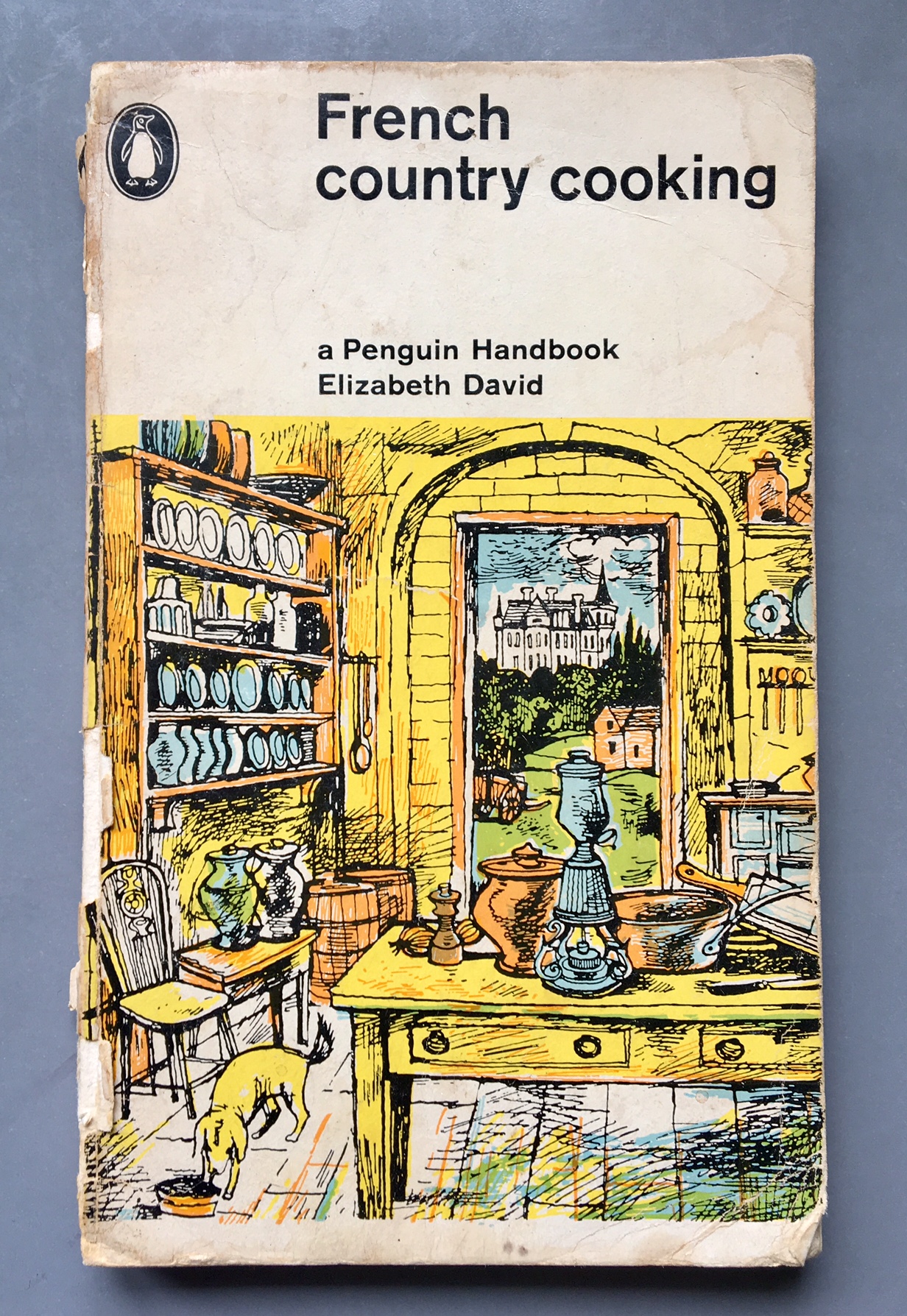 Beryl (looking at the book, then at Lucy): “Are you one of those Elizabeth David junkies?”

Lucy (somewhat taken aback at her aggressive tone): “Err, umm, well, yes, I suppose I am. And I like saving old books.”

Beryl (picking up the book gingerly): “Hmm. Yes, we get people in here like you. There’s another Elizabeth David down the back you know, called ‘Cooking in Summer’ or something.”

Lucy (smiling): “Yes, I saw that one but I’ve got that already and I thought I’d leave it for someone else.” 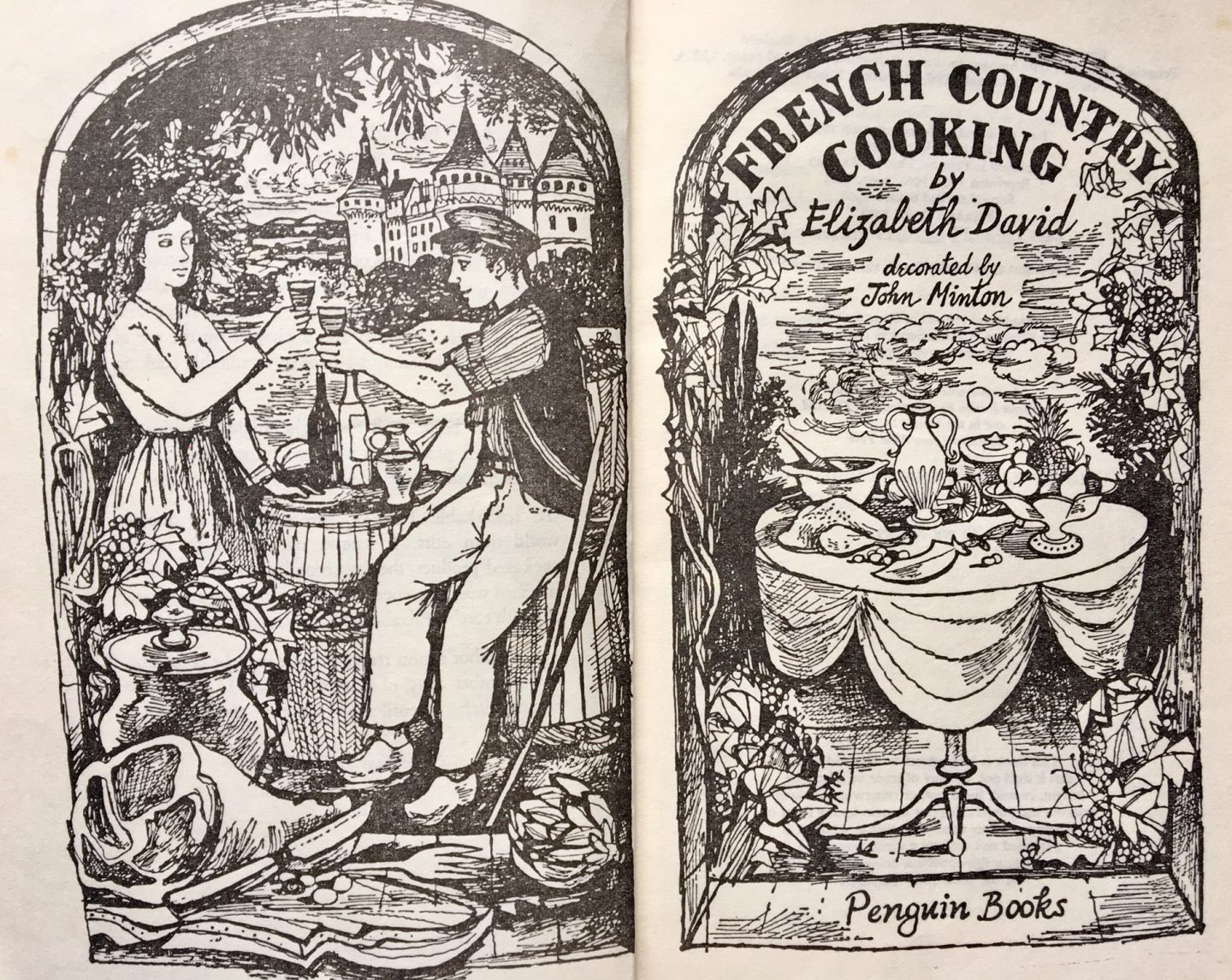 [Lucy begins to speak but Beryl overrides her]

Beryl: “Some sort of cookery writer. Normally we sell her books on Trade Me because (sniffs imperiously) there are these junkies who want to buy them.”

Meryl (looks at Lucy to assess junkie-ness, then at the book): “Oh. Isn’t that funny? I’ve never heard of Elizabeth whats-her-name. I thought all the great chefs were men.”

If I was the sort of person who did things by the book, I’d be planting my garlic today. But after the failure of last year’s crop – I’ll never know if it was too much rain at the wrong time, the wrong sort of compost, or just bad luck – I’m a bit reluctant. Serves me right for being so smug and getting it in on time last year, I suppose. Traditional garden lore says it should be planted on the Shortest Day, but apparently it can be planted any time from May until the end of July. That’s especially useful information for people like me, who don’t fancy going out in the dark tonight to get the job done. 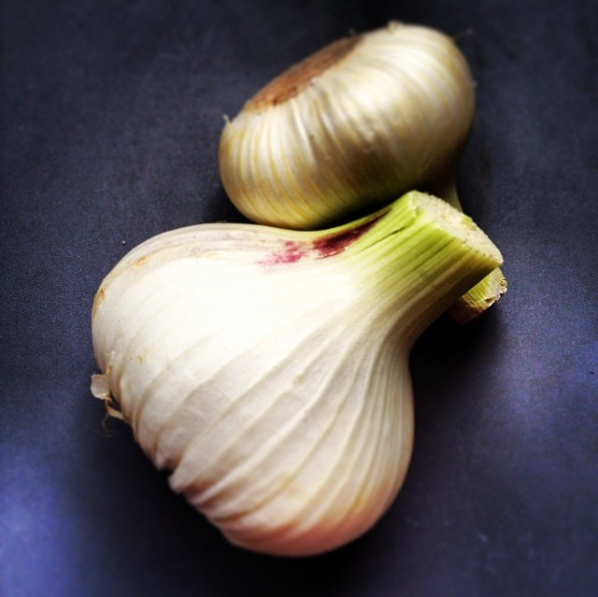 In the meantime, I’m indulging in some extremely moreish black garlic grown and cured in Marlborough. Black garlic, or ‘garlic noir’ as it’s sometimes called, is fermented for a month to create a kind of super garlic that has double the antioxidants of the ordinary stuff. The fermentation process also changes the texture and flavour profile – black garlic is soft and almost chewy, with a sweet and smoky flavour that reminds me of molasses or fresh dates. It’s extremely moreish and I often find I have eaten a couple of cloves while slicing it up for something else. 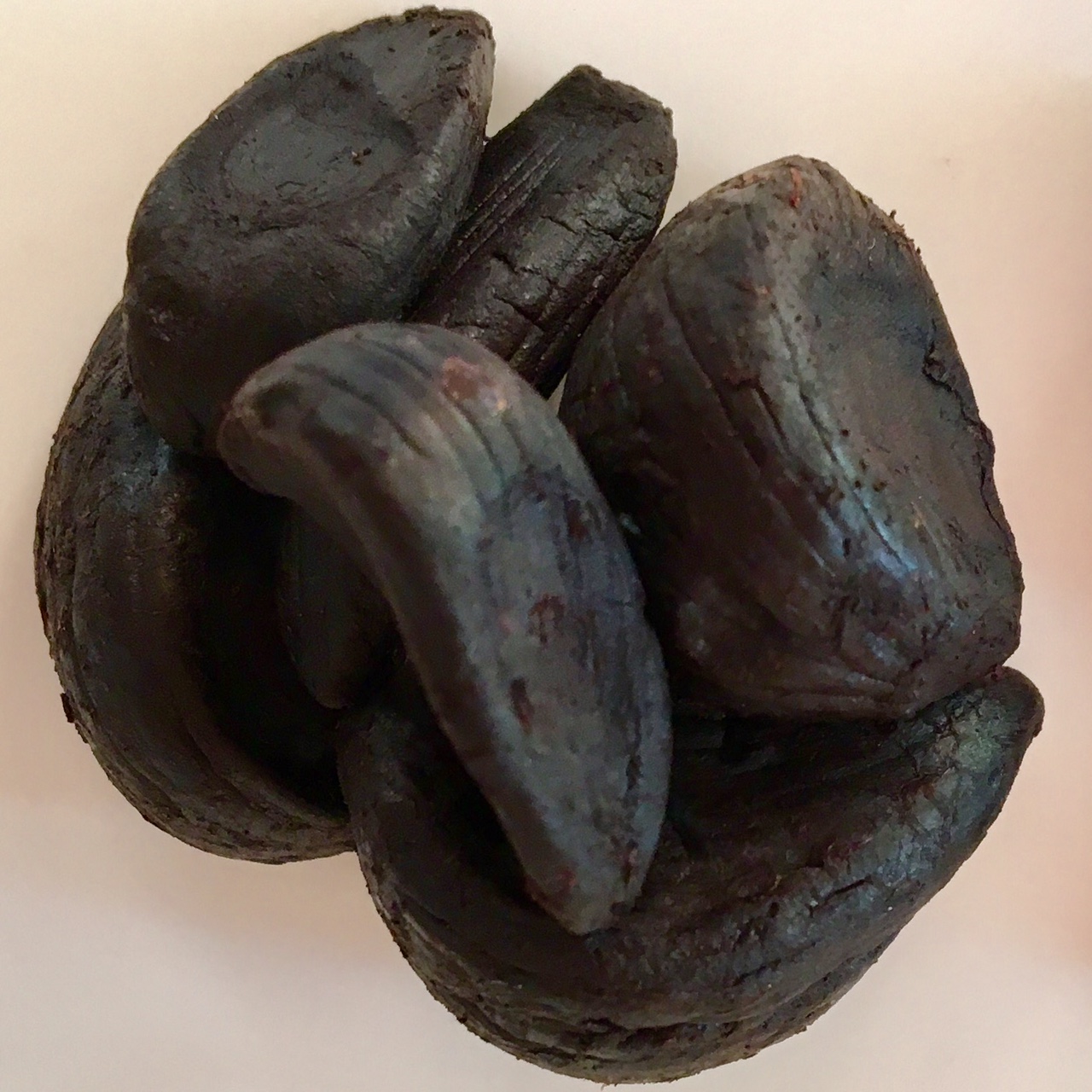 The clever people who make it at Marlborough Garlic suggest using it as part of an antipasto platter, but I’ve also been adding it to vinaigrettes, or as a last-minute flavour boost to risotto, as it doesn’t need to be cooked. They also suggest dipping it in dark chocolate, which I was unsure about until a recent lunch at the sublime Wharekauhau Lodge where pastry chef Yannick Beaurienne devised a gorgeous black garlic chocolate mousse with kumara and pear brunoise, kumara ice cream and garlic caramel, as seen below. 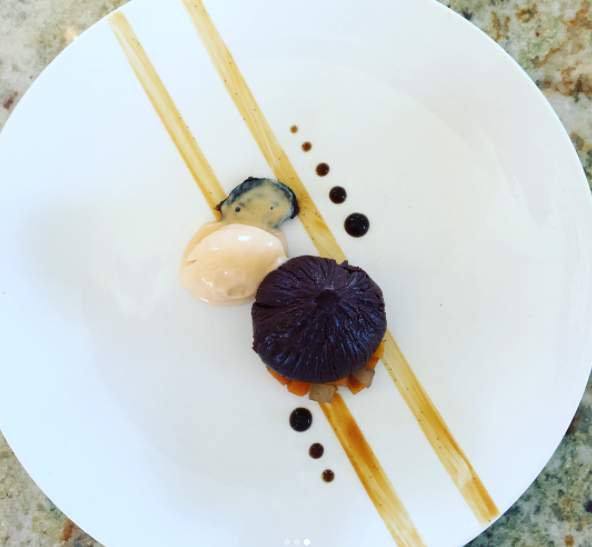 Yannick’s version was beautiful, elegant (and extremely labour-intensive). Here’s my much-simplified version for the home cook. 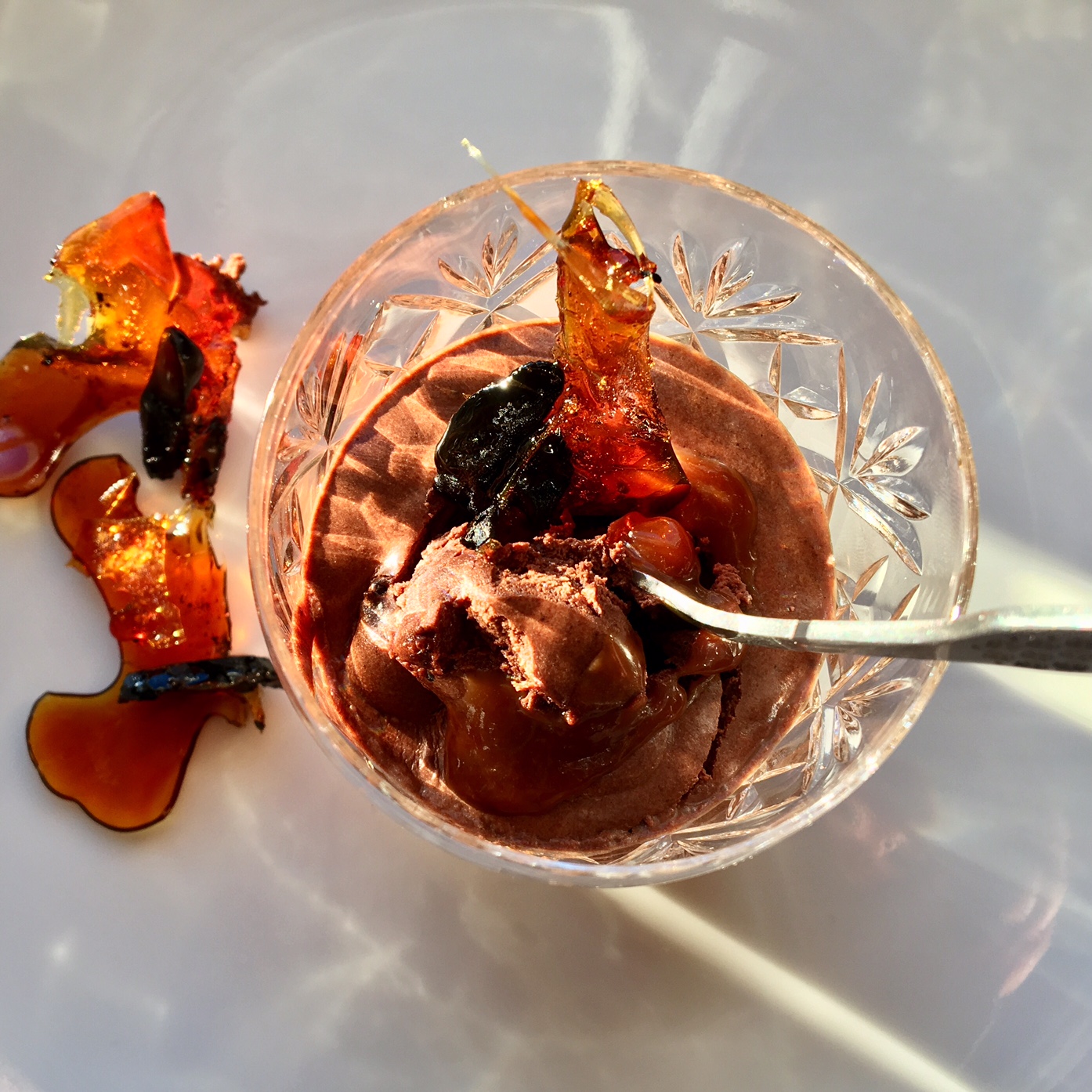 Black garlic chocolate mousse with black garlic toffee
Don’t be afraid – the black garlic just deepens and enriches the chocolate flavours. This was a huge hit in my household, to the point that there was barely any left to photograph.

A little extra cream, for drizzling

Break the chocolate into pieces and put into a heatproof bowl. Put half the cream into a small pot and heat to nearly boiling point. Pour over the chocolate and set aside for five minutes.
Mash the garlic to a paste and stir through the chocolate and cream until the mixture is smooth.
Whip the cream and vanilla to soft peaks. Fold through the cooled chocolate mixture,  then pour into a large bowl or divide between six small serving dishes (I use Great Aunt Shirley’s whisky glasses). Cover and put in the fridge to set for at least two hours.

For the toffee, spread the sliced garlic on a piece of non-stick foil or baking paper. Put the sugar and water in a small pot and set over medium heat. Stir to dissolve the sugar, then let it bubble away for five to 10 minutes, until it turns a dark golden colour (don’t wander off, this will happen sooner than you think!) Pour the toffee over the garlic and leave to set.

To serve, remove the mousses from the fridge at least 20 minutes before serving. Break the toffee into pieces and use to decorate each one. Drizzle a little cream over the top and serve.

Are you planting garlic this winter? Do you have any top tips for failed growers?