I’m sorry to be a weather bore, but really, there is little else in my life at present. (Well, apart from writing and packing and trying to see people and remember errands and wrangling wet washing and convincing the Small Girl that she doesn’t need Hop On Pop read to her for the tenth time in 20 minutes. But I digress.)

I know it’s very Anglo-Saxon to discuss atmospheric conditions but I just can’t help it. The wind! The rain! The brief bursts of sunshine that make me think it might be ok to hang the washing out or go for a walk, only to get drenched or tossed about like an autumn leaf.

On the upside, it’s perfect weather for soup – and I have just the thing. It might look a bit sludgy in the photo but it’s full of robust, earthy flavours thanks to some good old-fashioned ingredients – bacon bones, split peas, a handful of parsley and some (frozen) pea puree stirred in at the end to make it a little less khaki. It’s almost worth the weather. Almost. 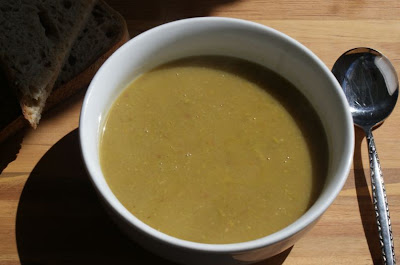 PEA SOUPER
This recipe can be adapted to suit your fridge or garden, but the split peas and bacon bones are essential.
Take your biggest pot (or borrow one from next door) and set it on the stove. Add 2 cups split peas, 2 large onions, finely chopped, a stick or two of celery, de-strung and finely chopped, 2 carrots, peeled and diced, 500g bacon bones (or a small ham hock), 3 litres of cold water and a bay leaf.
Bring to a simmer, skim off any scum that floats to the top, and simmer gently for about one and a half hours until the peas are soft. Add a cup or two of frozen peas and cook for five minutes more. Let it cool a little, then remove the bones and bay leaf (pouring it through a coarse sieve is the easiest way to do this and will protect you from the terrible fate of putting a bacon bone through the blender).
Puree, then return to the pot and reheat to serve.
Makes lots – freeze some for your next rainy day.

Last night, doing the dishes, I suddenly realised that this is the first time in five years that we haven’t been in France in mid-September. This time last year we were in a tiny apartment in Paris and the Small Girl had slept through the night for the first time (her exhausted parents lay awake anyway, because they couldn’t believe she wasn’t going to wake up). The year before that, Corsica, where I suspected I might be pregnant but ate lots of unpasteurised cheese anyway.
September is the time of La Rentree in France – everyone gets sorted and goes back to school or work after the long summer holidays. I think September in New Zealand is about waiting for the rain to stop! 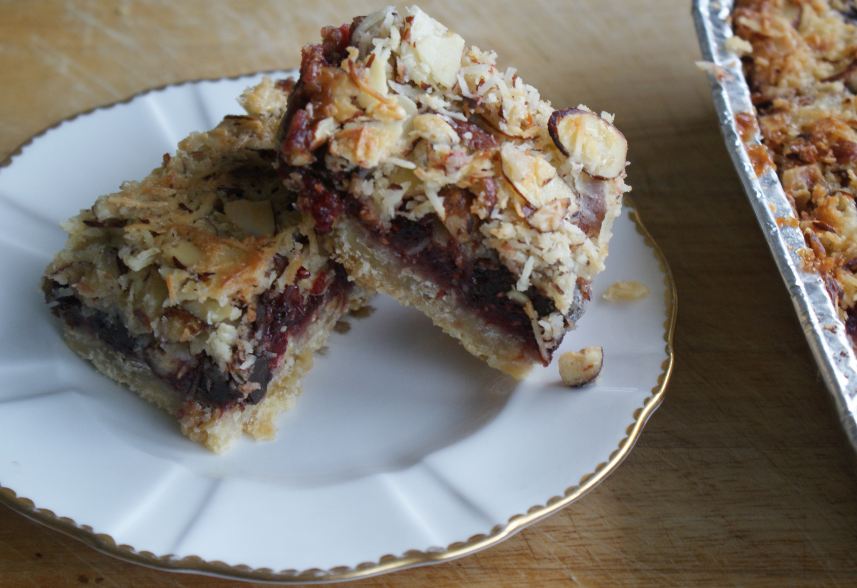 My quest to use up everything in the house before we move (in 12 days, argh!) is continuing apace. In some ways I feel incredibly organised because I know that we’ll be having a risotto, two pasta dishes, something with venison and something involving cannellini beans, baby beetroot and a bag of frozen corn kernels in the days to come. Hmmm. And definitely some Szechuan takeaways.

But last night was all about parsley and Parmesan. For my birthday two months ago my sister sent me a mysterious courier package with a note saying that her new philosopy was to only give “useful” presents. Inside was a kilo of proper Parmesan, a rare treat in this little corner of the world. I never thought we’d get through it in time but it’s amazing how cavalier you get when you’ve got a lot of a luxury ingredient and a short time in which to use it. The Small Girl must be the only toddler in town to get Parmesan on toast for lunch. 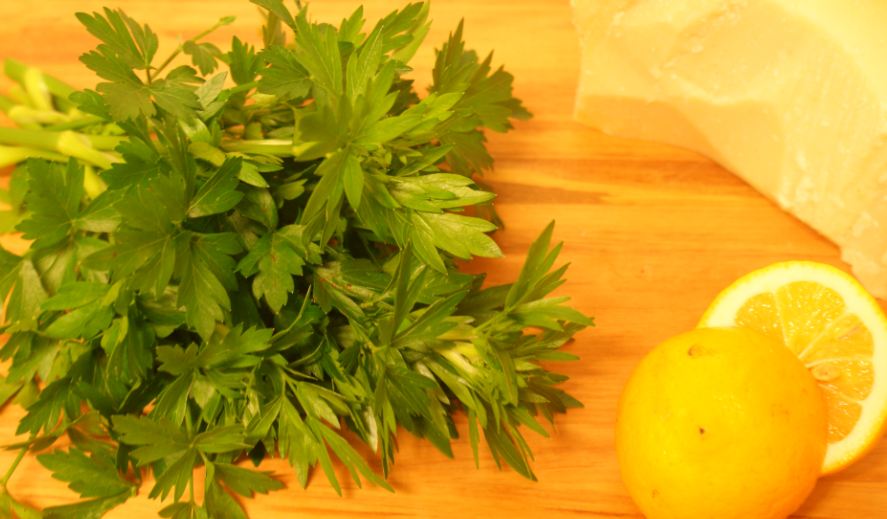 Anyway. The other things we have in abundance at the moment are lemons and parsley. The tiny seedling I planted a year ago has blossomed into a huge, regenerating bush obliterating everything I planted around it. With a packet of spaghetti in the pantry, we were set. 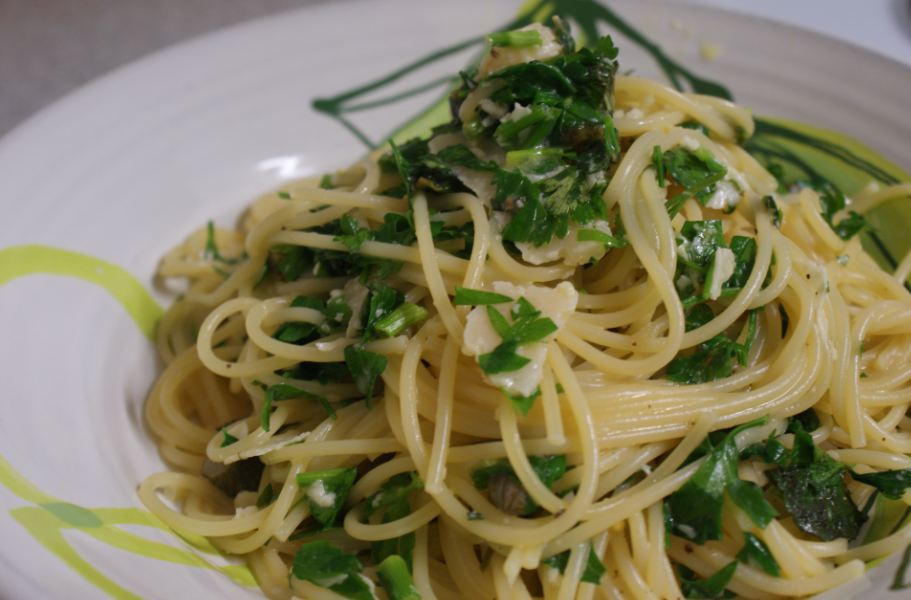 This is fresh, zingy and can be made in the time it takes for the pasta to cook. (Well, in theory. It took me ages last night but that’s because other affairs of state took me away from my rightful place at the kitchen counter.) Bon appetit!

Cook the pasta according to packet directions until al dente. While it’s cooking, mix all other ingredients in a large serving bowl. Taste for seasoning and to adjust lemon/oil proportions if necessary. Drain the pasta and toss it through the lemon/parsley mix, then pile into warmed bowls. Eat with gusto.

Confession time. Over the winter the Small Girl and I have been having a weekly pie-shaped treat, the sort that is low on nutritional value and high on nostalgic charm (well, nostalgic for me at least). 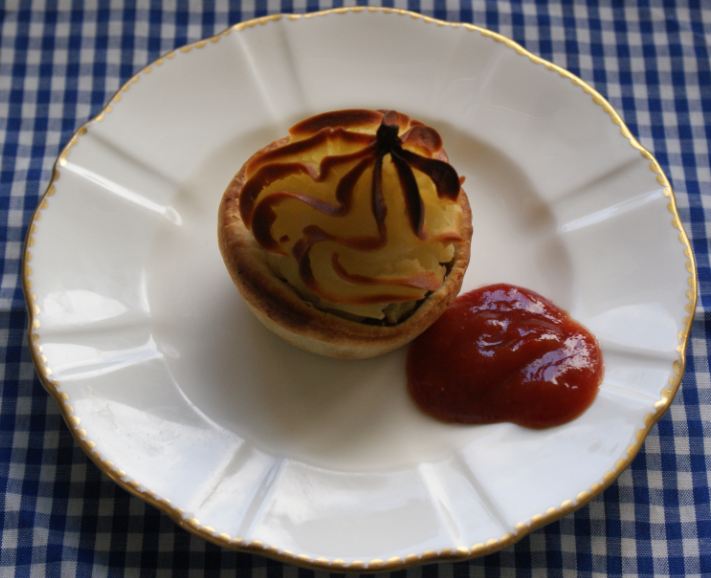 When we came back to New Zealand a year ago I realised how incredibly distinctive the smell of an old-fashioned Kiwi bakery is. It’s sweet and savoury at the same time, a combination of filled rolls packed with ham and salad, golden pies brimming with steak and cheese and lamingtons oozing cream and jam. This smell is as definitively Kiwi as the All Blacks and no 8 wire – and it’s quite reassuring to know that it still exists. Most of these bakeries are now run by Cambodian and Vietnamese immigrants, who have become keepers of the old ways. Perhaps they recognised early on that the way to a New Zealander’s heart was through their stomach and that stomach would like a pie, a filled roll and a date scone, thanks very much.

Anyway, the Boy Wonder grew up big and strong on this kind of traditional Antipodean snack and I’m hoping the Small Girl will inherit at least some of his super powers. She abhors potato in any form except this one, a piped crown of whipped mash (I suspect it’s not even real potato, but I try not to think about that) hiding a little pool of gravied mince, which is held in a pastry case. The baby food gurus would probably have a fit, but I am working on the principle that a little of what you fancy can sometimes do you good. In any case, it’s part of her heritage. I’d be being a bad mother to deny her that.

Do you have a secret bakery treat from your corner of the world?