I pulled a packet of frozen peas out of the freezer yesterday and something heavy shot out from underneath them and landed on my foot. I uttered a string of epithets not suitable for a family-friendly food blog and bent down to pick it up. Was it a brick? Was it a small frozen animal? Was it that packet of wonton wrappers that I’ve been planning to use for ages? In fact, it turned out to be three small pieces of fillet steak. Hurrah! I nearly lost a toe, but I gained an excellent dinner. It seemed like a fair trade to me. 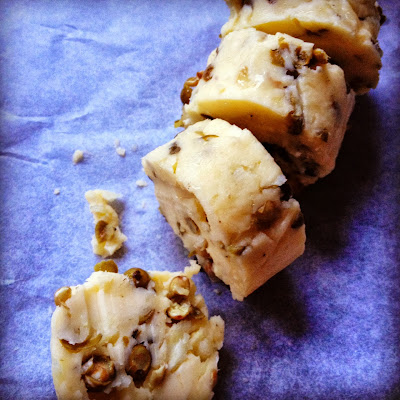 Green peppercorn sauce – the cheat’s version
When I told my beloved we were having steak for dinner he looked like I’d dropped the frozen meat on his foot. He perked up a bit when I told him it was fillet, then he perked up even more when I told him I’d make his favourite green peppercorn sauce. But somewhere between making the offer and dinnertime I got sideswiped by such fatigue that I couldn’t face all that faffing about with reductions and whatnot. Instead, I made this in all of five minutes and it was so good I don’t think I’ll ever go back to the other one. If you’re not a carnivore, rest assured this is equally good on baked potatoes or bread.

What’s your favourite sort of butter?

While I’ve been swamped by a tidal wave of work in the past few weeks, two good things have happened. One, my sister-in-law arrived with a suitcase of farm meat (vastly superior to anything in all but the poshest butchers) and two, dearest husband has devised a very tasty thing to do with it. I’m thinking of pretending I have a lot of work on more often. 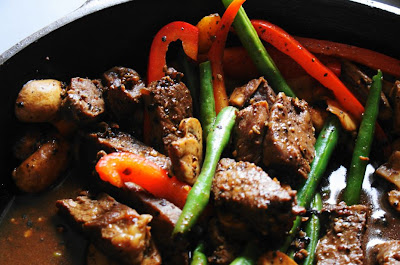 This is how my lovely husband cooks this dish, which he has devised to fit in with his after work schedule. His other commitments after work three nights a week include being glued to his work phone, playing princesses, cajoling the Small Girl into the bath and generally having the household in order by the time I get home from work. If you don’t eat meat, you could try this treatment with tofu or those Quorn things that I always feel a bit suspicious of.

500g steak – we used porterhouse, but you could use Scotch fillet or even rump – sliced into 1.5cm x 2.5cm strips

Put the steak, soy sauce, fish sauce, ginger, garlic and spring onions in a bowl and toss well until the meat is well cover. Cover and set aside to marinate for 45 minutes (if leaving it for longer, put it in the fridge and let the meat return to room temperature before cooking).

Crush the peppercorns with a mortar and pestle (or put them in a heavy plastic bag and pulverise with a hammer). Add them to the steak and stir to coat.

Heat a large, heavy pan until a drop of water sizzles on the surface. Add the oil, then cook the steak for about three minutes. Remove to a clean bowl and set aside to rest. Stir-fry the vegetables (pour any leftover marinade into the frying pan) until just cooked. Remove the pan from the heat, toss in the steak strips and stir to combine. Serve with rice. Serves four.

Who does the weeknight cooking in your house?