Makiri, my great aunt with the dazzling blue eyes and wicked grin, has died. She was 97 and for the last few years lived in the horrible twilight of dementia, but her death still feels like a terrible loss. Makiri, who grew up in a remote rural area in New Zealand, was named after a Maori princess. She told us amazing stories about her childhood, such as the tale about their pet pony, Pocket Edition, who was allowed to come in the house and sleep in a real bed. Retelling this story to someone else recently it suddenly occurred to me that perhaps this wasn’t entirely true – but as a child I would believe anything Makiri told me.

She and Uncle Jack were like fantasy relatives from books. Uncle Jack had a booming laugh and would burst into song or dance at the drop of a hat, while Makiri carried a solid navy handbag from which she could dispense barley sugar sweets whenever a parent wasn’t looking. When they came to stay with us she would make pikelets in the shape of cats and choux pastry swans. When we went to stay with them, she would have a collection of specially chosen library books and I was allowed to drink ginger ale from a crystal tumbler. 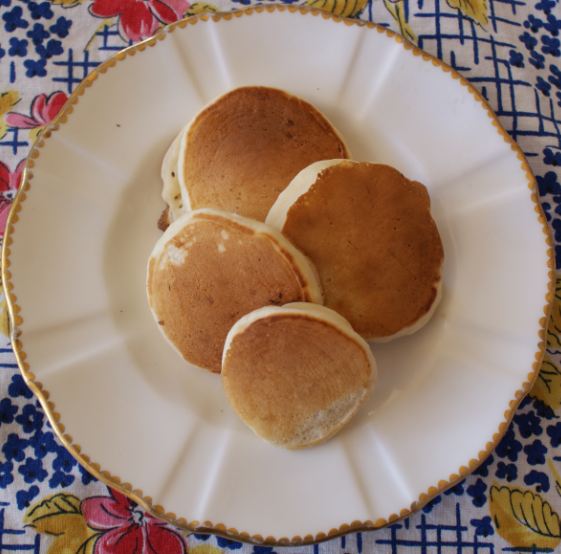 Yesterday in honour of her memory I tried to make cat pikelets for the Small Girl. I need more practice – like everything Makiri did, it’s harder than it looks – but they still tasted great. Next stop, choux pastry swans and a pony who sleeps in a real bed. 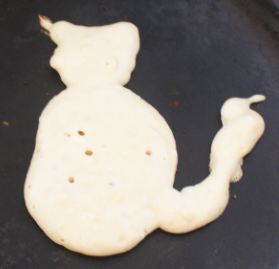 Perfect Pikelets
Every Antipodean has a pikelet recipe, handed down from generation to generation. Here’s mine, adapted from the trusty Edmonds Cookbook. The first pikelet, like the first pancake, is always a disaster. Gobble it up and keep going.

Beat the egg and sugar together in a bowl, then sift in the dry ingredients. Stir to mix, then add the milk and yoghurt and mix gently to combine. Lightly grease a heavy frying pan with a little butter and place over medium heat. Drop dessertspoonfuls of the mixture into the pan (hold the spoon vertically to get a perfect round). Cook until bubbles appear on top, then flip gently and cook for a few minutes more. Best eaten warm from the pan, or cold with lashings of butter and raspberry jam.