The inspiration for this week’s sweet treat came from Emma at Frog, Goose and Bear. A couple of weeks ago she posted a recipe taken from a Bible Society cookbook which sounded so refreshingly old-fashioned and wholesome that I just knew it had to be good. But, you know, I couldn’t resist fiddling with it a bit, especially as I had a little bag of wholemeal spelt flour in the pantry just waiting for an outing. Spelt is an ‘ancient grain’ that’s kinder to the digestive system than wheat, so a lot of people find it easier on their tummies. It also has a slightly nutty flavour that I think lends itself well to baking. 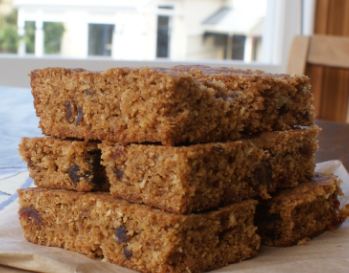 Anyway, I dutifully copied down Emma’s recipe but as I was mixing it I started wondering if I’d copied it down wrong. Surely it needed an egg? By that stage of course I’d turned the computer off, so I was flying blind. Instead, my eyes lit upon a ripe banana languishing in the fruit bowl and I remembered something I’d read earlier in the week about using bananas as an egg substitute in baking. So the end result probably bears no resemblance whatsoever to Emma’s original version, (which doesn’t contain any eggs!) but I think it’s pretty good. Why don’t you make both and see what you think? Have a sweet sweet Friday and a very happy weekend…

Preheat the oven to 180C and grease a slice tin. Melt the butter and syrup in a large pot over a low heat. Let cool for a few minutes and then add all remaining ingredients. Bake for about 20 minutes, until your kitchen is filled with warm, sweet smells. Let cool, then slice into bars. Store in an airtight container.

Do you have a favourite end of the week baking treat? Link in to spread the sweetness of Fridays.