Where did 2010 go? Am I the only one who feels like the end of the year has sneaked up on them? Most people I’ve spoken to recently seem glad to see the back of 2010 and I can understand how they feel. It’s been a tough old year in lots of ways that I won’t bore you with now, but we’ve survived relatively unscathed and for that I am extremely thankful.

One of the things that’s happened to our little family that I’m most grateful for is that we found Hana, who looks after the Small Girl when I’m at work.
Before we moved and I started my new job I told people I was looking for a Mary Poppins-alike. They all laughed and told me horrible stories about prison-style childcare centres or nightmare nannies, assuring me that I was looking for a needle in a haystack. In fact, finding Hana – a modern Mary Poppins – was so easy that we still can’t believe our luck. The Small Girl loves her to bits and we think she’s brilliant.

Last week Hana turned up with a pile of presents for us all (see, I told you she was lovely!), including a whole stocking-ful of treats she’d made. This pretty pink syrup was one of them. The Boy Wonder has been sneaking it to pour over strawberries and yoghurt for breakfast, but we’re saving the rest to splash into glasses of bubbles tonight for a fruity toast to 2010. 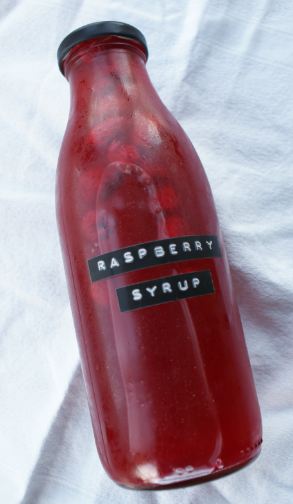 1 cup raspberries, plus a few more to garnish
1 cup sugar
1 cup water
juice of half a lemon

Bring all ingredients to the boil in a medium saucepan. Keep boiling until the mixture thickens slightly. Strain through a sieve into a jug, then pour into sterilised jars or bottles in which you have placed a few whole raspberries. Seal and allow to cool. This syrup can be stored for about two months unopened, but store it in the fridge and use within a week once you’ve opened it. Makes about 400ml.

Do you have a favourite end of the week – and in this case, end of the year – sweet treat? Add it here to spread the sweetness of Fridays…