When I open our freezer I feel a little like Captain Lawrence Oates, the Arctic explorer who selflessly walked out into a blizzard on Scott’s South Pole expedition to give his companions a better chance of survival. Oates told them he was “just going outside, I may be some time” – and was never seen again.

I’m not saying sticking my arm into our compact freezer is anything like going to the South Pole, but I often wonder what happens to the things I put in there. Some vanish, never to be seen again, but there are occasional happy endings where I retrieve things I threw in and forgot about. Like a bag of rhubarb from my parents’ garden, already chopped in neat pieces, and a tub of crumble mixture. Or a second bag of rhubarb, weighing exactly the right amount for these tender little cakes. 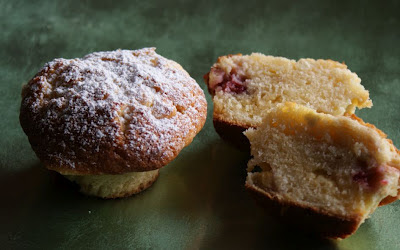 White chocolate and rhubarb cakes
I am hoping the green-ness of this rhubarb will make these a contender for the March edition of We Should Cocoa, in which the theme is ‘green’. I’ve simplified the recipe, which came from a 2010 issue of Sainsbury’s magazine, but I can’t tell you who wrote it because that vital piece of info is missing, along with the contents page. Whoever it belongs to calls them muffins, but because they are made in a completely counter-intuitive way to normal muffins, I think they’re better described as cakes. The batter is very light and tender, and I think it would be lovely with apricots instead of rhubarb. But that would make them even less green, wouldn’t it?

For the rhubarb:
200g rhubarb, chopped into 1cm pieces
2Tbsp sugar
125ml water
Put the rhubarb, water and sugar in a small pot. Bring to the boil, let cook for one minute, then remove from heat. Drain the rhubarb and let cool.

Preheat the oven to 190C. Grease a 12-hole muffin tin.
Cream the butter and sugar until pale and fluffy. Sift in the flour and baking powder and stir briefly, then add the hot milk. Stir again, then add the eggs, one at a time and mix to a soft batter. Fold in the rhubarb and chocolate. Divide between the muffin tins and bake for about 20 minutes until springy and golden.
Let cool for five minutes then gently turn out to a cooling rack. Dust with icing sugar to serve.

Have a great weekend everyone. After meeting a few jammy types this week I’m really looking forward to Sunday!