I am a bad New Zealander. It used to be that I never felt remotely patriotic, ever, about where I came from, just a slightly sinking feeling that it wasn’t somewhere exotic. Then we moved to the UK and I felt even less proud of my country, especially seeing hordes of drunken, obnoxious Kiwis doing hakas in public places. Then the London bombings happened and, that morning at work while pandemonium reigned around us, I thought, “actually, I quite like coming from an unimportant country from the bottom of the world, and I am very lucky that I can go back there whenever I like”.

But I feel like an especially bad New Zealander at this time of year because I’ve never been to an Anzac Day dawn service. I have, however, made and eaten a lot of Anzac biscuits. And the first notes of the Last Post reduces me to tears, every single time. I hope that counts for something. 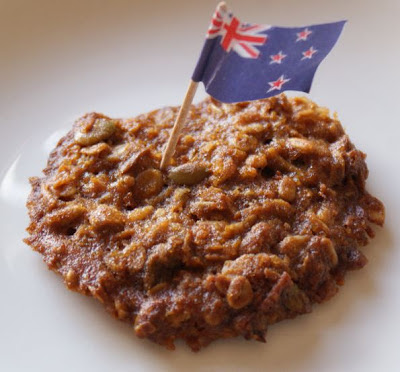 Anzac Biscuits 2012
This is a ‘new’ version of the traditional Anzac biscuit, which was originally made to withstand the long voyage by sea to reach soldiers fighting abroad. I’m not sure what those men, some of them little more than teenagers, would think of it, but perhaps it’s not so much about the biscuit but what it represents – a little bit of love from home. It makes a very crunchy, almost lacy biscuit – not dunking material, I’m afraid, but still good. This recipe comes from the Chelsea Sugar Refinery, which turns Australian sugar cane into New Zealand sugar (how Anzac is that?) And, at the risk of sounding overly patriotic, New Zealand golden syrup is SO much nicer than the English version!

Preheat oven to 180C and line a baking tray.
Melt the butter, golden syrup and sugar together over low heat, then set aside. Mix the baking soda and water together, then add this to the butter mixture. Stir in all the dry ingredients and mix well.
Put tablespoons of the mixture on the prepared tray – leave room for spreading – and flatten gently with your hands. Bake for 10-15 minutes until golden. The biscuits will be very soft, so let them firm up on the tray before transferring them to a rack to cool. They will become chewier after a day or two (if they last that long). Makes about 18.