It has been a grim week here at Kitchenmaid Towers. The house nearly blew over on Sunday night, the Small Girl is going through an intense developmental period (ie, throwing horrible tantrums), I have a head cold and – worst of all – we have run out of episodes of Game Of Thrones.

Suffice to say, I haven’t been in the mood for much baking. I haven’t really been in the mood for much eating either, though I did require a fair slab of chocolate yesterday afternoon. The thing that has kept us going though is this cake. Now, I know it doesn’t look fancy. There’s no icing, no clever layers and no posh ingredients. But it does have a level of wholesomeness, thanks to the wholemeal spelt flour I made it with, which surely mitigates the large amount of oil and sugar. Sometimes you’ve got to take what you can get in life and in this case, I’m having a large piece. 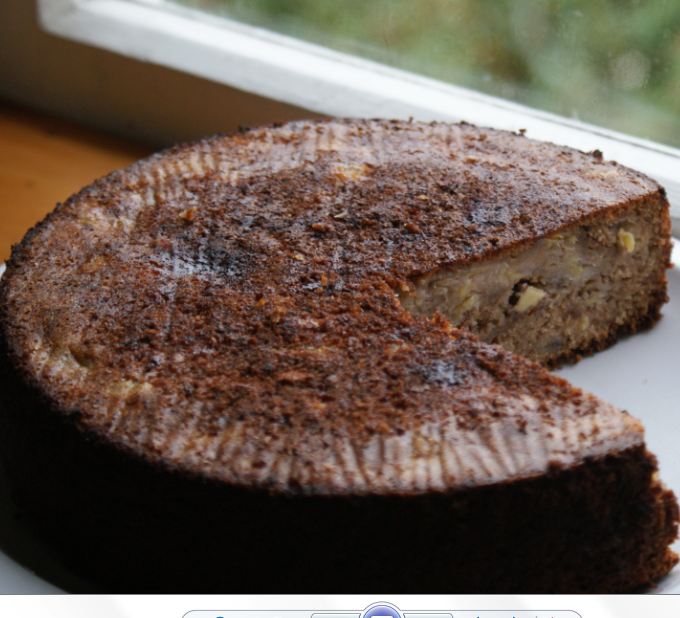 Sparrow Cake
In its more glamorous form, this is essentially a Hummingbird cake – the now-famous combination of pineapple and banana usually layered with masses of cream cheese icing. I’ve used wholemeal spelt in this recipe, mostly because I wanted to see what it would turn out like. The original recipe comes from a woman I used to work with when I was a bored personal assistant. I once made a roulade that un-rouled itself on the way into work and she still told me it was the nicest thing she’d ever eaten. I said the same about her cake, and she gave me this recipe.

Preheat the oven to 175C and grease and line a 24cm tin. Put the eggs, oil and sugar into an electric mixer (or bowl, with an electric beater standing nearby) and beat until thick and pale -about five minutes. Beat in the banana and pineapple, then sift in the dry ingredients. Fold through until nearly combined, then fold in the nuts. Pour into the prepared tin and bake for 50-60 minutes, until a skewer comes out cleanly and the top of the cake springs back when pressed.
Let cool in the tin for 10 minutes before turning out onto a rack. Ice – or eat – when completely cold.
This cake keeps well in the fridge and can be frozen with some success. It can be eaten frozen with even more success if you are having a really bad week.

Happy weekend to you all x