When my darling husband (yes, he of the togarashi affair) looked at the ingredients for this pie laid out on the bench, he told me it was going to be “a heart attack on a plate”. I can see how he might surmise that, but everyone has to die of something, right?
If you love peanut butter, then this is worth the risk. A super-rich, creamy filling topped with chocolate ganache and more peanuts (and more chocolate) – one slice and you’ll think you’ve died and gone to heaven. Two slices and you’ve probably done enough damage to your cholesterol rate to have a chance at getting there. 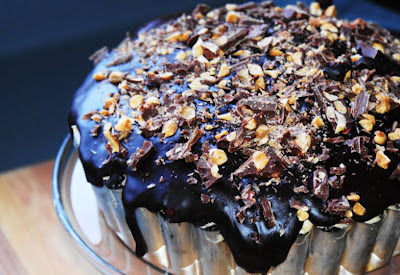 Peanut butter pie
This recipe is adapted from this one, which I found on Pinterest (which I try to stay off as much as possible, for obvious reasons). I made the original for Bake Club on Monday and the general consensus was that it was a little too sweet. Maybe that was the extra three peanut slabs I crumbled on the top? The version below is a little more restrained. Don’t be put off by the lengthy instructions, it’s easier than it looks.

For the crust, first dip a pastry brush in the melted butter and paint the base and sides of a 20cm springform or tart tin. Preheat the oven to 180C.
Pulverise the biscuits to crumbs in a food processor, then add the remaining melted butter and process until combined. Press evenly into the prepared tin, using a glass to get the sides and base even.
Put the base in the freezer for 15 minutes, then transfer to the hot oven and bake for 10 minutes. Set aside to cool completely.
For the filling, whip the cream and 2Tbsp icing sugar to soft peaks and set aside. Put the cream cheese, peanut butter and vanilla in the processor (no need to clean out any stray crumbs) and process until smooth. Fold this mixture into the cream (add a couple of spoonfuls of cream to the peanut butter mix first to lighten it), then fold in the chocolate and peanuts.
Pour this into the cold, baked crust and smooth the top. Cover loosely and refrigerate for at least four hours.
For the topping, put the cream in a small saucepan and bring to a simmer. Remove from heat and add the chopped chocolate. Stir until it is smooth and glossy, then pour over the pie. Sprinkle the peanuts over the top and leave to set in the fridge for 20 minutes. Serves at least eight.