The hand-chalked blackboard sign loomed in front of us like a vision. It was a hot, windy day in the Wairarapa and the promise of ‘REAL FRUIT ICE CREAM’ was the perfect cure for three crochety travellers after two hours’ in the car.

We drove into the orchard and parked outside the tin shed shop. Inside, in 40-degree temperatures, a sulky queue waited while one sweating woman operated the till and another worked the ice cream counter. I began to realise that we had made a wrong turn. The fruit and vegetables, which I’d first assumed to be grown on-site, looked like they’d travelled as far as we had. The fridge was full of dog meat. None of the staff looked like they’d eaten a vegetable that wasn’t a deep-fried chip for a very long time.

The ‘real fruit ice cream’ sealed the deal. This was no artisan orchard operation, more like a factory production line. The ‘real fruit’ was pre-bagged frozen stuff, fed into a tube with cheap blocks of ‘vanilla’ ice cream. The resulting concoction spewed in a swirl out the other end of the machine, caught by a cone that tasted of stale communion wafers.

But by then it was too late. We paid handsomely for our ice creams and sat outside in the shade, wishing we’d stopped at a dairy for three of Tip Top’s finest instead.

Nothing beats a good ice cream, nothing quite disappoints like a bad one. The good stuff is easy to make at home – here’s how. 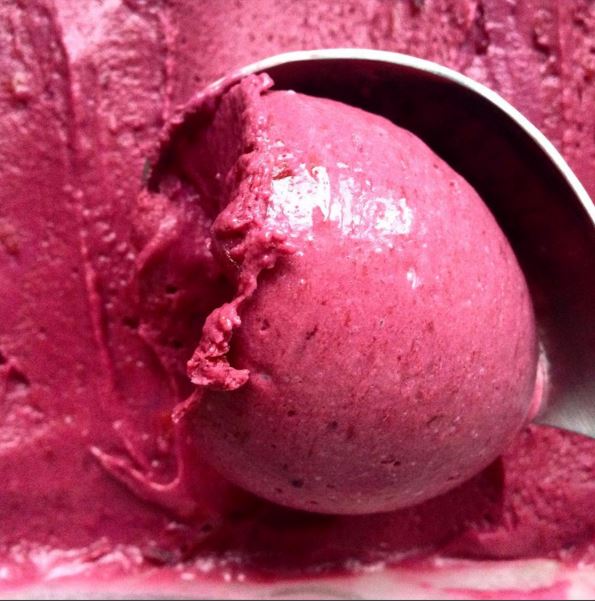 Black Doris Coconut Ice Cream
Last weekend my sister brought me a bag of tiny Black Doris plums from Hawkes Bay. They were slightly too soft for eating, so I decided to have a bit of an experiment with them instead. This incredibly good ice cream was the result. I based the coconut custard on this chocolate and cinnamon ice cream recipe by Emma Galloway (an ice cream so good it inspired me to acquire an ice cream attachment for my KitchenAid). It’s very easy – the only hard bit is waiting for the custard to chill.
If you don’t have an ice cream maker, then you should probably try making this just as a custard – set it in small bowls and top with a lid of melted dark chocolate.

Heat the oven to 200C and line a small baking dish with foil. Halve and stone the plums, then place, cut side up, in the dish. Sprinkle over the 2Tbsp of sugar and bake for 25 minutes. Set aside to cool slightly, then mash into a puree. You should end up with about 1 cup of fruit.

To make the custard, put the egg yolks and sugar in a bowl and beat until white and fluffy (an electric mixer is the easiest way to do this).
While that’s happening, put the coconut cream, vanilla and plum puree in a saucepan over medium heat. Bring to near boiling point, then pour onto the egg yolk mixture, whisking all the time.
Pour this mixture back into the saucepan and return to the heat, stirring constantly for about five minutes or until it is thick enough to coat the back of a spoon.
Transfer to a bowl and cool completely before refrigerating, stirring occasionally to stop a skin from forming on the top.
When the custard has chilled thoroughly, churn in an ice cream machine according to instructions.