I never open presents early, but this year I’ve done it quite by accident. I didn’t mean to – it’s just that I started reading a post on one of my new favourite blogs and there, at the bottom, was a nice surprise.

Realising that Michael of Me, My Food And I had passed on a One Lovely Blog award felt like opening the post and finding a cheque from a mysterious stranger. Funny, isn’t it, how you feel like you know other bloggers really well when you probably wouldn’t recognise them in the street? It’s even funnier when you read a blog and think, ‘wow, blogger X would really love this one, I should tell them about it’. 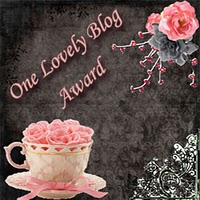 Part of accepting Michael’s award is that I answer the following questions, so here goes (indulge me, it’s Christmas!):

1. When did you learn to cook?
As a child, because my siblings (I have quite a few) were always cooking alongside my mother. I can’t remember the first thing I ever made, but I do recall that ‘Caroline’s Chocolate Slab’ from Mary Berry’s Fast Cakes was one of my early specialties, along with Firehouse Chilli (once I ascertained that it said 1tsp cayenne OR 1tsp chilli in the recipe, not both!)

3. Do you have any food guilty pleasures?
I’ve already detailed my not-so-secret passion for fish fingers on this blog, but my other guilty pleasure at this time of year is old-fashioned New Zealand asparagus rolls. Thin white bread, buttered, crusts cut off, rolled around spears of tinned (and it MUST be tinned) asparagus. I don’t know why I love this decidedly 1960s dish, but I can’t get enough of it. My other secret love at this time of year is eating trifle for breakfast on Boxing Day!

4. Tell us about your most memorable meal…
New Year’s Eve, 2006, at Mon Vieil Ami on the Ile St Louis, Paris. Actually, I can’t recall what we ate exactly but I have a vague recollection of capon, foie gras, coquilles St Jacques and rather a lot of champagne. It was the most expensive meal the Boy Wonder and I have ever had and we vowed never to speak of the cost again. As it happens, I’ve forgotten! Alternatively, I have many happy memories of the incredible gyros we regularly ate while living on Syros in the Cyclades islands between May and July 2007. Two Euros bought the most succulent pork kebabs, dressed with Greek yoghurt and wrapped in fluffy flatbreads, washed down with Mythos beer. We were working for a mad woman during a heatwave and eating gyros on the beach was one of the only things that kept us sane.

5. What is your drink of choice?
Water. Or very good wine. Mostly though, peppermint tea.

But the best thing about getting this award is that I get to pass it on. So, Merry Christmas and thanks for lots of laughs, recipes and inspiration to:

Then, no sooner had that turned up than I got another award treat from Dom @ Belleau Kitchen. The funny thing is that I think Dom and Michael would be great mates – I mean, apart from their obvious good taste in blogs. So I can pass Dom’s award on too… but I might save that one for a New Year treat. In the meantime, why don’t you send me the name of a blog you love?