Want to know how to make a Swiss roll? Push him off an alp (boom boom)!
Want to make a delectable chocolate roulade? Then you should try this recipe, which was the special occasion pudding of choice when I was a child. This is my sister’s recipe, which was written out and stuck to a page of my mother’s spiral-bound recipe notebook. It was a long time before I felt grown-up enough to tackle it on my own, but it’s actually ridiculously easy. What is not so easy is photographing it late at night after a glass of wine or two. Warning, extremely dodgy chocolate roulade shot approaching… 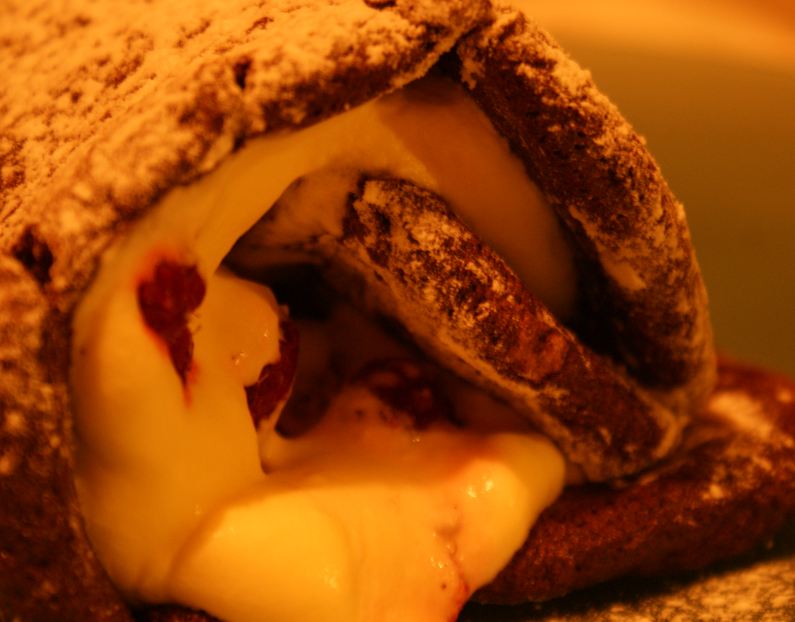 Marion’s Chocolate Roulade
This is my entry for this month’s We Should Cocoa challenge. You can’t tell from this terrible photo, but it’s light, chocolatey and rolls like a dream around some rum-soaked raspberries and cream.

Preheat the oven to 180C and grease and line a sponge roll tin. (I didn’t have a tin big enough, so I just lined about half of a roasting dish. Worked perfectly!)
Beat the egg yolks until beginning to thicken, gradually add caster sugar and whisk until pale and thick. Mix in cocoa.
Whisk egg whites with a pinch of salt until stiff but not dry. Fold into the chocolate mixture (stir in a large spoonful first to lighten it, then fold in the rest with large, gentle strokes). Pour into the prepared tin and bake for 20-20 minutes, until springy.
Cool slightly, then turn out onto a sheet of greaseproof paper and roll up.
To serve, unroll, remove the paper and spread with whipped cream etc. Re-roll gently. Dust some icing sugar over the top and serve.