Yesterday morning I woke up and felt the relief I always feel on a Thursday at the thought of not having to go to work. I lay in bed, duvet pulled up to my chin, and savoured my freedom.
Then I remembered the builders were arriving to tear out the windows downstairs, the Small Girl had a friend coming over, there were mountains of clothes to be washed and I had to go to the supermarket. I thought about pulling the duvet over my head and hiding for the rest of the morning, but instead I got out of bed and turned on the oven. Then I whipped together this wholesome morning tea snack (for the builders and three-year-olds to share) and baked it while simultaneously loading the washing machine and unloading the dishwasher, writing a shopping list and having a shower. Who says multi-tasking is old news? 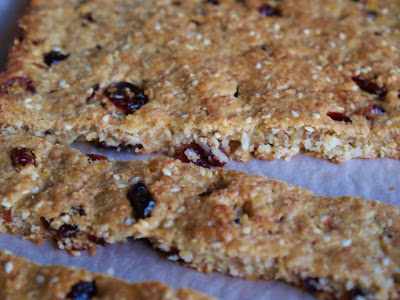 Cranberry and banana slice
This is a new version of something inspired by a recipe I first saw here. It bares even less resemblance to the original than ever, but is still very good – sort of soft and chewy and reasonably good for you. So good, in fact, that I’m waiting for another batch to cook while writing this post. Well, those builders are pretty hungry…

Heat the oven to 180C. Line a brownie pan (something measuring about 20cm x 20cm) with a piece of baking paper so there’s an overhang on two sides that you can use to lift the slice out with when it’s cooked.
Melt the butter over low heat, then add the sugar, sesame seeds and banana. Stir over medium heat for three or four minutes, until the banana begins to caramelise and the sesame seeds will smell nutty.
Remove from the heat and let cool for five minutes, then stir in the cranberries, coconut and flour. Mix well, then press into the prepared tin.
Bake for 20 minutes, until golden brown. Leave in the tin to cool, then lift out and slice into bars.