When I was a proper journalist (the sort that actually went out of the office and talked to real people) I’d often stumble upon fantastic charity shops in the middle of nowhere. If time allowed I’d sneak off to them after the interviews were done – while the old ladies who staff these shops are great sources of local knowledge it’s hard to concentrate on finding treasure when you’ve got an interview looming.

These days, stuck at my desk, I’m reduced to finding fun things on the internet in the course of my research. It’s not quite as good, but you can unearth lots of gems all the same. Take speculoos spread, for example. I started reading about it while researching recipe formats last week. It was totally new to me, but it’s apparently ‘Europe’s alternative to peanut butter’ and caused much excitement when Waitrose started selling it in the UK late last year.
The real thing is made from ground-up Speculoos cookies – with a few other ingredients – and is said to be as addictive as Nutella. My DIY version is much simpler, you can make it from everyday ingredients and it’s just as habit-forming. 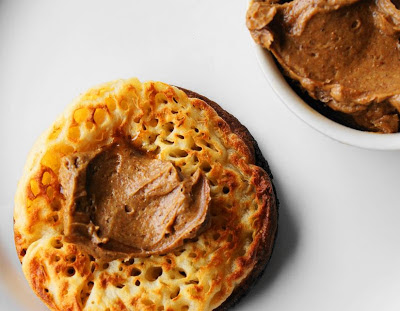 Speculoos spread
I have no idea what ‘real’ speculoos spread tastes like but this is absolutely delicious – like eating raw gingerbread but without the attendant stomach ache. I’ve been eating it on hot crumpets, but it would transform even the most basic slice of bread. Or you could put it in a toasted sandwich with sliced banana. Or you could just eat it with a spoon…

Put all ingredients in a small bowl and beat until smooth and fluffy. Eat immediately, or store in the fridge, covered.