I felt very old last week. First, I saw a group of new university students moving into their hostel accommodation and realised I looked like one of their mothers. Second, I got out of bed and put my neck out. Third, I saw several copies of Mollie Katzen’s Moosewood Cookbook in charity shops.

She was more hippy than hipster, but Mollie Katzen ruled the vegetarian school of eating in the late 1970s and 80s. She was part of a collective (it was the 70s, remember?) who ran a restaurant in Ithaca, New York devoted to good, wholesome food. The hand-lettered Moosewood Cookbook, first published in 1973, reflected that ethos (instead of a table of contents it has a ‘table of contentment’) and went on to become one of the 10 best-selling cookbooks of all time, according to the New York Times. The food, though a little dated in parts, is not unlike that in Ottolenghi’s Plenty, so if you see a copy in a charity shop, snap it up. 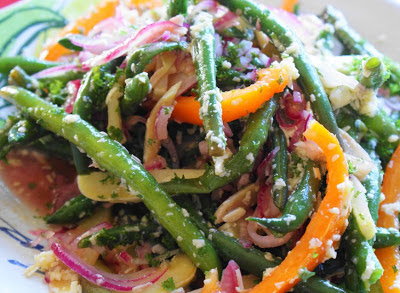 Moosewood Bermuda Salad
All that said, I felt a bit nervous when my hand fell on the book’s cracked spine when I was searching for a contender for February’s Random Recipe challenge. I thought of some of the book’s less appealing recipes, like Stuffed Cabbage or White Rabbit Salad (cottage cheese, apples, seeds) and wondered how I would sell those to my dining companions. In the end though, the benign gods of Random Recipes – or at least the beatific Dom of Belleau Kitchen – smiled upon me and we ended up with this gem. It looks a bit messy, but it tastes delicious. Don’t tell Mollie’s crew but we ate it with a roast chicken and it was a very happy match.

Put the vinegar, salt and pepper and garlic in a large bowl (the serving bowl, to cut down on dishes) and stir well. Whisk in the olive oil. Add the sliced onion and set aside.
Steam the beans until just tender. Drain, then add to the marinade. Stir well and let cool, then cover and refrigerate for at least three hours before serving.
Ten minutes before you’re ready to eat, take the salad out of the fridge. Toss through the parsley and grated cheese just before serving. Serves four.

The instructions in the book are very explicit: “This is a COLOR SALAD. Don’t substitute white onions or cheese or you’ll lose the scheme. Okay?” You’re also supposed to serve it on a bed of red cabbage leaves for added wow factor. I didn’t. As for the cheese, the book specifies colby (ugh!) but we used tasty cheddar. Feta or Parmesan would be good too. The final instruction is to “Garnish Lavishly” with eggs, tomatoes, olives, sprouts, lemon slices or orange slices. You can take a book out of the 1970s, but you can’t take the 1970s out of the book.

Do you have the Moosewood Cookbook? Do you still use it?